X Factory, the premier designer of mid-motor cars, was again out front in developing the famously smooth 4-Gear transmission to increase rear wheel traction. With the development of brushless motors, then the introduction of sintered rotors, and now high-discharge LiPo batteries, the torque effects can actually be too much in some spots on some tracks, usually in the infield. Paul explained, “Especially on lower traction surfaces, I noticed my car pitching too violently under power and particularly on brakes. Weight transfers between throttle and brakes at times can exceed the rear tires’ grip.

The flywheel bolts right on the slipper shaft, therefore rotates opposite to the motor and wheels, smoothing everything out. On high traction surfaces where the tires have excellent grip, the part is not needed so much, and sometimes a lighter flywheel will provide just the right effect. Paul said, “That’s why we have center-punched a dozen holes in the periphery of the weight and supplied the proper drill bit so you can lighten the part to fit your track. At U.S. high-traction tracks like Hot Rod and Cactus, neither Brian nor I used the flywheel, but on indoor tracks I love it.” In U.K. on their high traction Astro tracks, Ellis Stafford, famous for running lots of motor, likes the way a light flywheel smoothes things out. Drilling three holes takes out about ½ gram from the 15-gram part.

Chazz commented, “Paul started the flywheel at 17 grams, but soon all the drivers had it down to 15 or less, and Ellis was at 13. So we brought the part down to 15, and drilling all the holes takes you to Ellis’ weight. This process stretched out testing, but Paul has it right now.”

Former Japanese National Champion and X-Team driver Yuishi Ajishi was skeptical at first. “I didn’t see how adding weight could help, but I tested the flywheel at Yatabe Arena and was about 1/10 second faster. The car transitions better. It was so good that the other Team drivers wanted mine! I used the weight at this year’s All Japan Championship.” That should be all you need to know!

The Flywheel Weights are shipping now to X Factory dealers all over the world, and will be on the X Factory store soon. 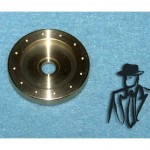 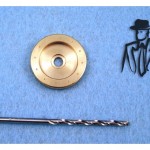 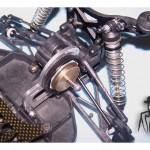