Back in February we told you about this new conversion kit that X Factory was developing and today they have released images of this new buggy.  As you can see the X – 6 Cubed will be a narrow chassis with many carbon fiber parts which keeps it in line with X Factory’s recently released SCX – 60CF short course and X – 60CF stadium truck.  But since this conversion kit is for a buggy they had to make some key changes in order for it to perform better for this platform. 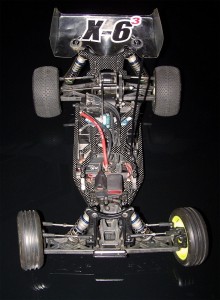 “Buggies are lighter and shorter, so you want different characteristics in how they take bumps, jump, and corner. Especially, they must flex differently, and we have achieved that in the X – 6 Cubed” said engineer Paul Sinclair.  “The car in these photos are my prototype car, and there are a few minor changes between this and final production. The biggest one is the way the ball studs are mounted to the rear tower; in production, the ballstuds will be in the same location but mounted vertically. Also, the body mounts are not on my car. Otherwise, this is it.” 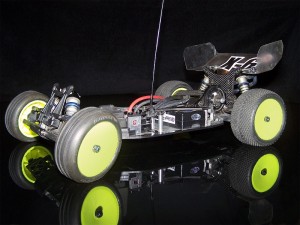 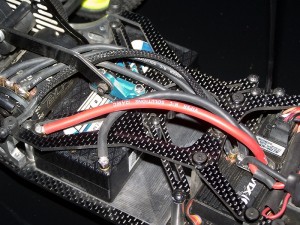 Spokesman Chazz Sinclair said, “We will be an all-carbon fiber company in about 6 weeks when the Cubed is released. Both the X – 6 Squared and X – 60 will still be available; they are molded chassis cars and there are certain advantages to that. But we believe most customers will prefer the lightweight, narrow carbon fiber cars.”

This new kit will be available two ways: a Conversion Kit for the AE B4/4.1/4.2 and an UpGrade Kit for the X – 6 Squared.  X Factory said the X – 6 Cubed should start hitting hobby shelves in June.

If you like this article, check out this additional article on X Factory.