With just one day of qualifying left at the 2016 IFMAR 1/8 Nitro Off-Road Worlds, it’s time for drivers to take some risks in an attempt to move up the leader board. Kyosho’s Jared Tebo took a big chance by running his whole 10-minute qualifier without a pit stop. It’s been tried before, but results are often negative for most drivers, resulting in flame outs, or worst case, an incomplete run. However, although rare, it has be done and it usually involves going a bit easier on the throttle, leaning out the engine to the brink of failure, and a few other inside tricks to conserve every last drop to make that timed qualifier (keep in mind, nitro fuel and tank capacity rules at the Worlds are very strict). In the case of Tebo’s qualifier, he shaved the time usually spent doing a pit stop (a good pit stop will often take in the mid three second range), and combined it with smart driving and good lines to post the fastest time overall. It was a huge risk and the whole crowd was on their feet as the second ticked. As he crossed the line, he was ahead of David Ronnefalk/ HB Racing’s then blistering time set for the round and eventually only 1.7 seconds behind Tebo, and received a huge cheer from the crowd who appreciated his efforts. With the Round win, he also locked down the TQ for the event. Congratulations! 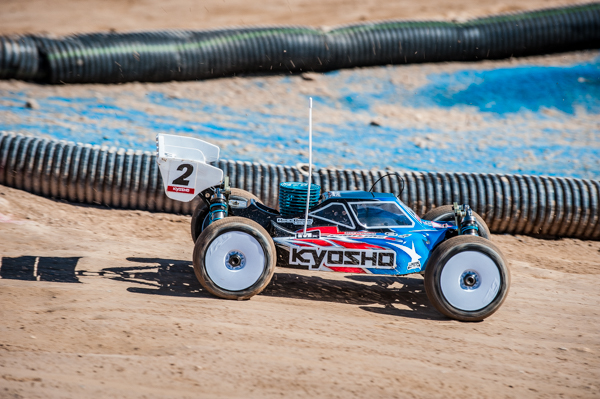 Kyosho’s Jared Tebo taking huge risk by maximizing every last drop of fuel on his way to TQ for the round and the entire event.