US Pro Series At Tiltyard: Ryan Lutz Wins With DNX408 And DESC410R

The 14th round of the US Pro Series took place this last weekend at the Tiltyard in Dayton, Virginia USA. 1/8th buggy was the main class with Short Course as a support class. In Short Course, Ryan Lutz took the overall TQ with a fairly healthy domination of all four rounds with his DESC410R. The final unfortunately got rained off so Ryan took the win from qualifying.

After 3 rounds of qualifying to dominate with his DNX408 in pro buggy – the 4th and final qualifier saw Ryan put on a show for the crowds with plenty of sliding and airiel ’stunts’, just because he could! In the final Ryan rebuilt his clutch but something was wrong and he couldn’t get the buggy moving – Ryan missed the warmup and had to start from the pitlane but thankfully the kind organisers at the Tiltyard waited a few minutes until Ryan had his car ready. With no warmup Ryan was still right on it as he pulled out a lap on the rest which he managed to hold to the line for another win.

You can try out Ryan’s setups from this race by visiting the TD setup area ‘In The Pits’ – or see the direct links to Ryan’s winning setups below: 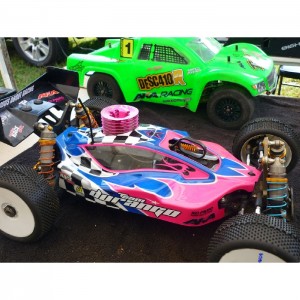 The post US Pro Series At Tiltyard: Ryan Lutz Wins With DNX408 And DESC410R appeared first on RC Car Action.