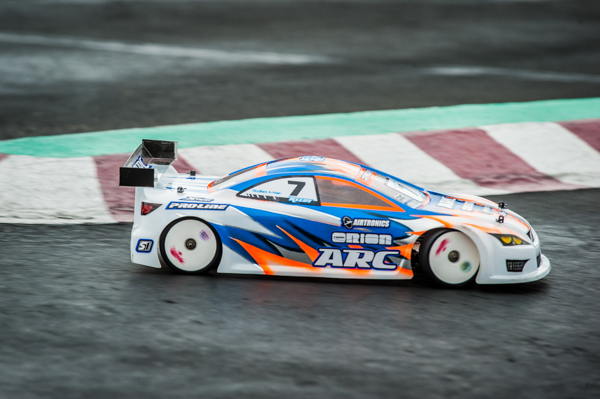 Running strong at the recent 2016 Reedy TC Race of Champions

ARC is a small boutique brand that makes on-road kits for serious racers. They might not be as well known as some of the brands we hear about in the United States, but with a lineup of vehicles supported by top-level racers, they are hoping to make a bigger impact in North America. One of those racers, is Sean Williams. A consistent top finishers and a recent finalist in the Open Class at the 2016 Reedy TC Race of Champions, Sean is meticulous with his set-ups and wrenching and constantly tests the newest tuning products and ideas. We got a chance to look under the hood of his ARC R11 to find out what makes it go so fast. Check it out. 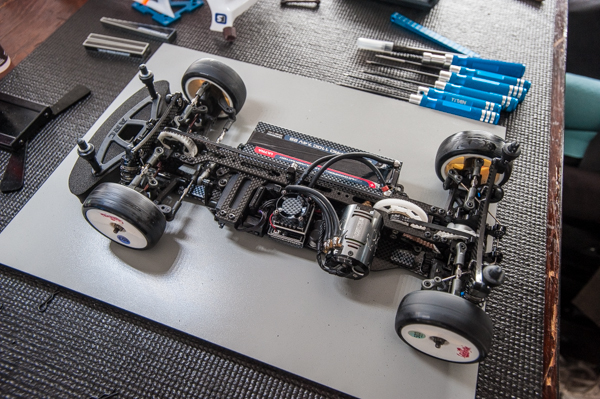 The R11 is the second-generation touring car platform from ARC and replaces the R10 that was first introduced a few years ago. 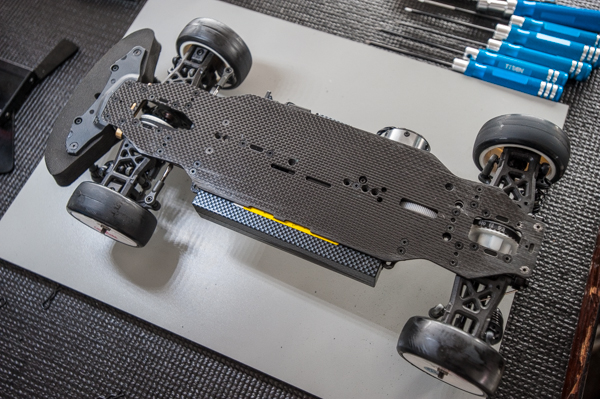 The car’s lower plate is a carbon fiber, but can be swapped for aluminum on surfaces like carpet.

Sean outfits the car with a spool and positions chassis weights with faux carbon fiber finish near the steering. The steering comes standard by attaching it to the upper deck in “floating” position, but like most of the other drivers in the Untied States, prefers the more direct feel of mounting to the bottom deck. Also, ARC uses three different types of plastic for most of their suspension parts, but the team usually uses the “Hard” plastics since it tends to improve responsiveness. He also treats and seals his carbon fiber edges with sandpaper and CA glue. He also swaps the kit ballcups for “low friction” ARC aftermarket ones. 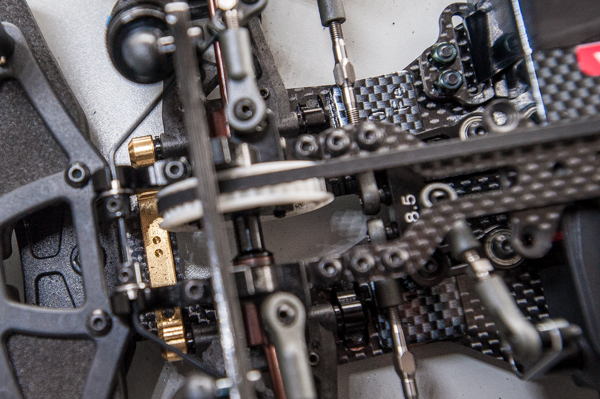 Sean tried the new optional front 14g brass hingepin block and liked the results of the added weight. The stock aluminum piece is 2.9g, so the difference is significant. 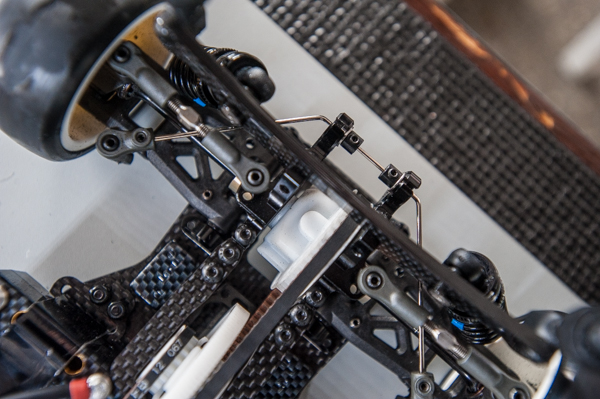 The diff in the back is filled with 5K silicone oil. The team usually runs between 5 to 7K, but usually settles on 5k. 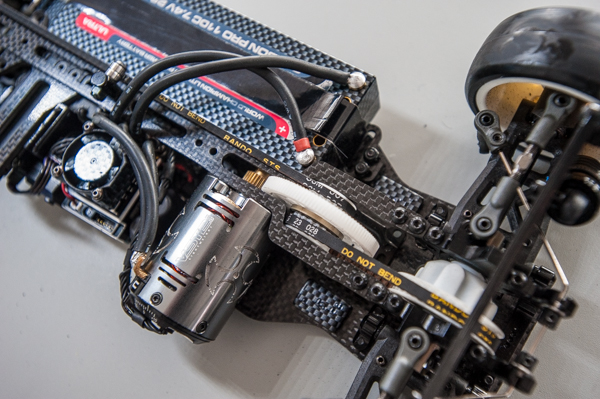 Sean was quick to point out that as far as he knows, ARC is the only company to use 4mm belts as an option instead of the more standard 3mm belts. He notes the 4mm belts have a different tension, stiffness and durability that he prefers. 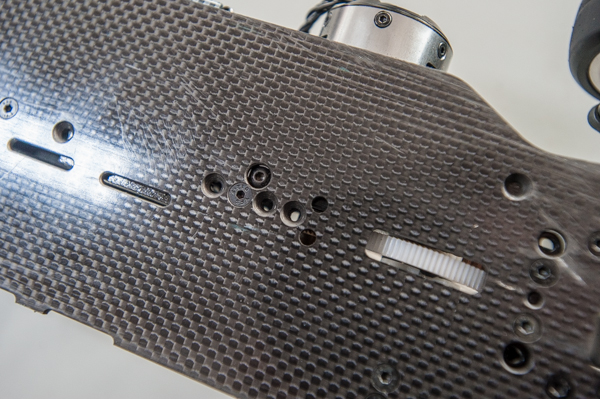 The motor mount uses various spots on the chassis to adjust flex depending on how it is screwed in. 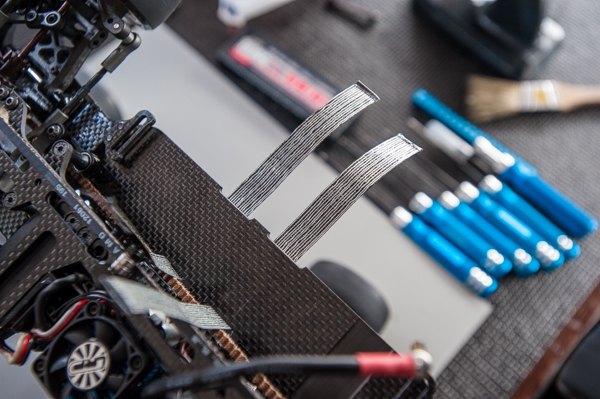 A unique tuning option is the ability to change the way the LiPo batteries are secured. Sean prefers the more traditional way that includes running strapping tape from front to back, but the car has inner slots to secure the battery transversely. He experimented with it, and still goes back to running it lengthwise instead of transversely (as shown on teammate’s car shown). 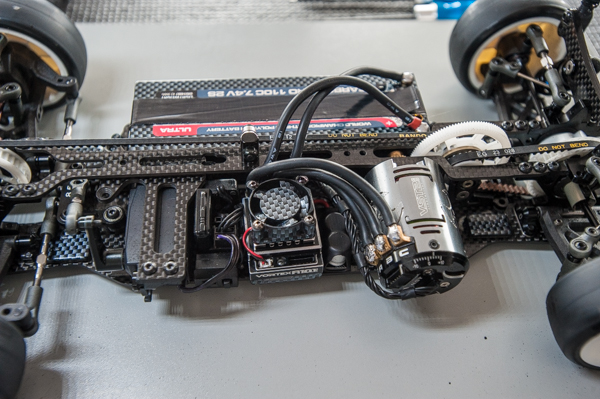 The car is power by Team Orion brushless system with a 4.5T motor with standard 12.5 rotor with just a bit of timing in the speed control (Turbo timing= 20, Boost= 2 setting, Turbo delay= .3 sec). He runs the same speed control settings as fellow Team Orion electronics teammate, Randy Caster (Team Associated). To help with space he uses a Sanwa antenna-less receiver. Surprisingly there is no fan to cool the motor. When asked, he explained that his system is very efficient and when he went through his testing he found the motor at the event ran at about 150-160F, so no need for a fan. 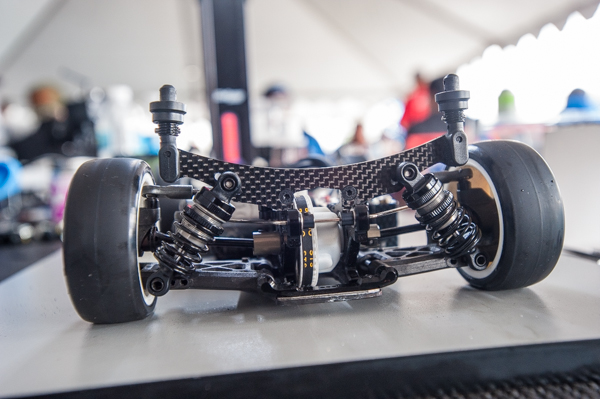 Like many high-end touring cars, the rear end incorporates A.T.S. (Active Toe System). As the suspension compresses, the car’s rear toe changes and is adjustable. For damping he uses 30W with 3-hole x 1.1mm pistons and kit blue springs. Sway bars are 1.4 front and 1.3 rear. The rear toe is set at minus 3 degrees while the front is .5 degrees. He also uses Acer ceramic bearings throughout. 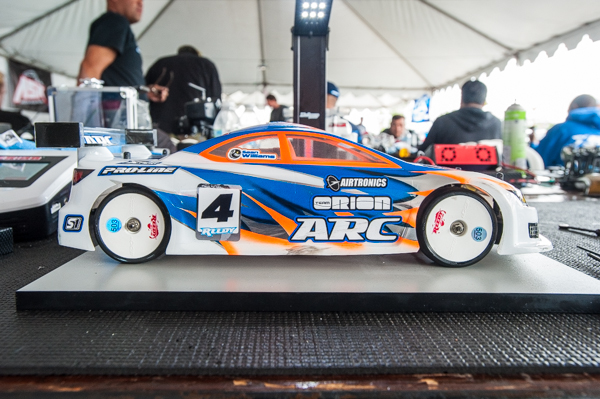 Like many racers, Sean prefers the handling of the Protoform LTC-R when running on asphalt. He also opts to run it without the addition of anti-tuck strips in the rear, siting that the additional weight and its inherent handling is not something he is willing to compromise. 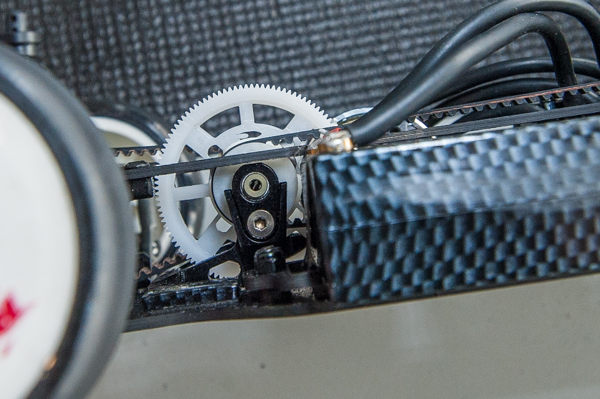 Detail of the new updated spur mount. This helps greatly with maintenance since it is much easier to remove and install. 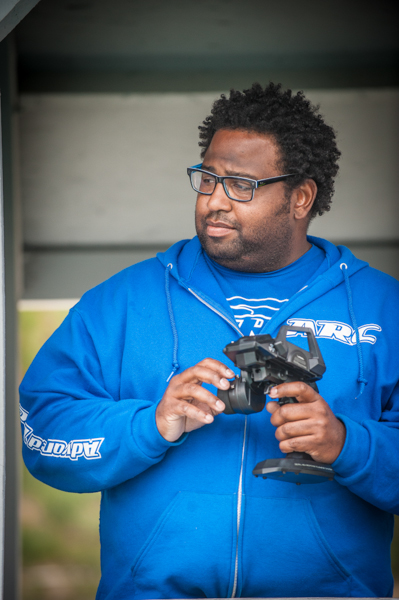 Sean Williams is an accomplished modified driver and meticulous with his cars.