After a highly successful 2010 season that saw Jake Weimer and Christophe Pourcel claim the 250 Lites West and East titles respectively, Mitch Payton and his Pro Circuit/Kawasaki/Traxxas 250 team began the 2011 Monster Energy Supercross season with a podium-sweeping finish at “Anaheim I,” the much-anticipated annual kickoff to the Supercross season. With Weimer and Pourcel no longer in the 250 class, the 2011 Pro Circuit/Kawasaki/Traxxas rider lineup includes new team member Broc Tickle, returning veteran Josh Hansen, and South Africa’s Tyla Rattray, who was on the 2010 squad but sat out the season due to injuries. All three riders proved they are more than ready for the races ahead of them after their commanding performance at Angel Stadium.

Broc Tickle wasted no time establishing himself as a force in the 250 class. Holeshot to checkers, Tickle made it look easy as he piloted his KX250F through the challenging course on the way to a no-looking-back win in Moto 1. Not far behind, teammate Tyla Rattray battled for third with Eli Tomac and finished fourth, well within the 9-rider cutoff for the Main Event.

A frequent holeshot-earner and moto-winner in 2010, Lites veteran Josh Hansen was faster than ever in Anaheim, and rode flawlessly when the gate dropped on moto two. Hansen blasted to the front with the holeshot and held the lead all the way to the checkered flag.

Broc Tickle got his second holeshot of the evening as the gate dropped on the first Main of the 2011 Supercross season, but Craig Christian took over the lead as the field settled into running order through the whoops. Tickle and Hansen were close behind, and as Christian left the door open in a turn, Hansen charged into the gap. Christian leaned into the corner only to find Hansen in the groove, causing Christian to drop his bike and allow the still tightly-bunched field past. The front runners were now Hansen, Tickle, and Rattray. While the battle raged for the off-podium positions, the Pro Circuit/Kawasaki/Traxxas team raced to sort out the order on the box. On lap four, Broc Tickle moved into the lead, and it looked like Anaheim 1 would mark the first Supercross win for the young rider. But with experience on his side, Josh Hansen bided his time and waited for the right opportunity to pass his teammate. With six laps to go, Hansen found a better line and retook the lead to establish what would become the finishing order. As the pyro cannons signaled the end of the 2011 Monster Energy Supercross season’s first Lites Main, Josh Hansen fist-pumped in mid-air to celebrate the well-earned win. Tickle and Rattray flew over in short order, and the three teammates enjoyed a victory lap together before taking the podium and celebrating with the rest of the hard-working Pro Circuit team.

Traxxas congratulates Josh Hansen, Broc Tickle, and Tyla Rattray on their exceptional performance in Anaheim, and salutes Mitch Payton and the entire Pro Circuit/Kawasaki/Traxxas team on an auspicious start to the 2011 season. Everyone at Traxxas is proud to be part of the winning team! 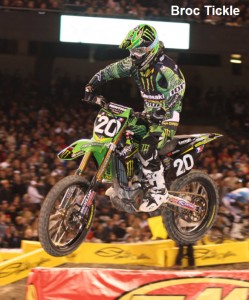 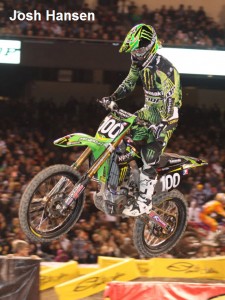 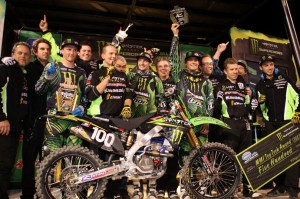