After kicking off the 250 East series in Houston the previous weekend, the 2011 Monster Energy Supercross 250 West series was back in action at San Diego’s Qualcomm Stadium where rare bout of rain greeted the riders. Slippery, muddy conditions tested the riders’ skills and ate up tear-offs as Pro Circuit/Kawasaki/Traxxas riders Josh Hansen (100), Broc Tickle (20), and Tyla Rattray (28) muscled their KX250Fs through the muck. For Rattray and Hansen, the track conditions weren’t the only obstacle. Hansen had been off the bike all week, protecting a broken left hand he sustained at Anaheim 2, while Rattray was still bobbled by an injured back that forced him to sit out A2. Despite the additional challenges, the Traxxas-sponsored riders put on another show of skill and courage that put Tickle and Rattray on the podium and kept Hansen at the top of the series-points leaderboard for the 250 West chase.

As the gate dropped on Heat 1, Tyla Rattray and Broc Tickle made it through the muddy mayhem to take third and fifth place. While Rattray maintained position, Tickle turned up the heat to move into fourth and overtake Rattray for third by the end of lap three. James Decotis and Nick Paluzzi rode up front, but the battle for the lead cost both riders the win on the final lap. Decotis and Paluzzi tangled and let Tickle by on the inside, righting themselves in time to stay on the podium by handing the W to Traxxas-sponsored Broc Tickle. Rattray held on to fourth, safe with a transfer spot to the Main.

Riding cautiously, series points leader Josh Hansen fell in behind Eli Tomac and Ken Roczen at the start, then moved to fourth as Cole Seely moved up. He held onto fourth place to the finish, well within the nine-rider cutoff for the Main. With slick conditions increasing the likelihood of a crash, and a need to minimize strain on his injured left hand, Hansen wisely rode only as fast as he needed in Heat 2 and saved his full effort for the Main Event.

As the mud flew and the riders funneled through turn one, Eli Tomac lead out Josh Hansen, Tyla Rattray, James Decotis, Kyle Cunningham, and Broc Tickle. They maintained that order until lap 5, when Decotis made a block-pass to overtake Hansen for second, moving Hansen to third. Traxxas-sponsored teammates Tyla Rattray and Broc Tickle in fourth and fifth. Rattray moved up to third in the next lap, pulling Tickle with him to fourth as Hansen fell back to sixth place. Both Rattray and Tickle then moved into podium position as Decotis missed a double-jump, allowing the Traxxas-sponsored riders to literally leap ahead. Tomac went on to his first Supercross win, and was joined on the podium by Tyla Rattray and Broc Tickle in second and third. Injured Josh Hansen rode through the pain to finish sixth and maintain his series points lead, three points ahead of teammate Tickle. 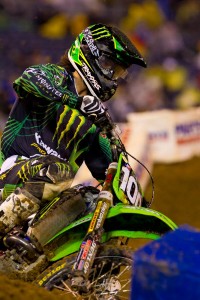 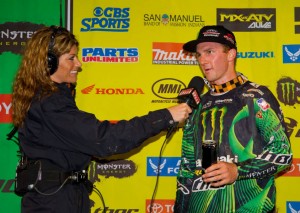 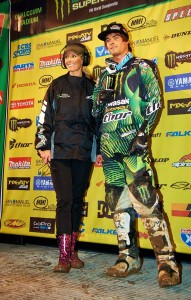 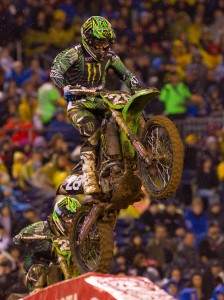 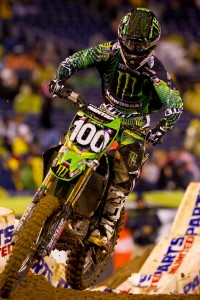