The NHRA Full Throttle Drag Racing Series heads to Heartland Park Topeka KS this weekend for the annual Dollar General Summer Nationals! Defending event champions Spencer Massey and Robert Hight will be looking to land back in the winner circle, as both have arguably been the hottest drivers in the series thus far in the season. However, since Steve Torrence and Ron Capps stole the win last week in Atlanta, the door is open for any competitor either Top Fuel and Funny Car to grab a win in the Heartland of America.

Spencer Massey, winner of three events this year, had a rough going in Atlanta when Doug Kalitta defeated him in the second round. Fans were, however, guaranteed a new 2012 Top Fuel winner. Steve Torrence defeated Tony Schumacher in the final round when Tony went up in smoke before half-track. This was Steve Torrence’s first NHRA Top Fuel win and he is now entered in the Traxxas Nitro Shootout.

Robert Hight found himself in yet another final round appearance. This was his fifth of the year and the seventh in a row for Traxxas and John Force Racing. Robert was forced to blip the throttle when his car lost traction early in the run. That was just enough for Ron Capps to slip by and grab his first win of the 2012 season entering him in the Traxxas Nitro Shootout. Ron was especially happy since he lost in the final against Traxxas’ Mike Neff last week.

A confident Courtney Force will be in Topeka. She lost to Robert Hight last week in the second round, but her Traxxas Funny Car was the most consistent out of all four of the John Force Racing teams. Mike Neff will be happy to have another shot this weekend. He failed to qualify in Atlanta, but he was the runner up last year in Topeka. Now that the floodgates have opened up on the 2012 season, every driver has a chance at the Wally this weekend!

Traxxas will be in Topeka with our full line of RC cars, support staff, and mobile hobby store. Fans will have a chance to drive a 1/16 Traxxas rally car, a 1/10 Traxxas Slash, and get to watch our professional RC drivers show the power and strength of the 65mph Brushless E-Revo! Make sure to swing by and check out what we have to offer! As always, we remind you to stay up-to-date on Traxxas.com. Facebook.com/TraxxasRacing, and the Traxxas Racing Twitter page. 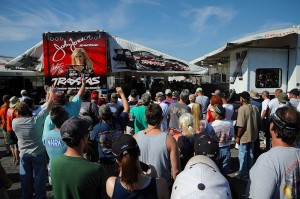 If you like this article, check out this additional article on NHRA.