Yesterday’s qualifying program for Pro Truck was a show of domination from one particular driver, who won two of the three rounds on his way to the overall, but it wasn’t nearly as convincing as what the increasingly bumpy and slick Fear Farm RC Raceway circuit saw on Friday. By winning the first two rounds by a total of over seven seconds, Team Losi Racing phenom Dakotah Phend let the racing world know that the multi-time electric national champion will be a contender for his biggest nitro win yet.

Want to read our full coverage of the 15th Annual The Dirt Nitro Challenge? Click here! 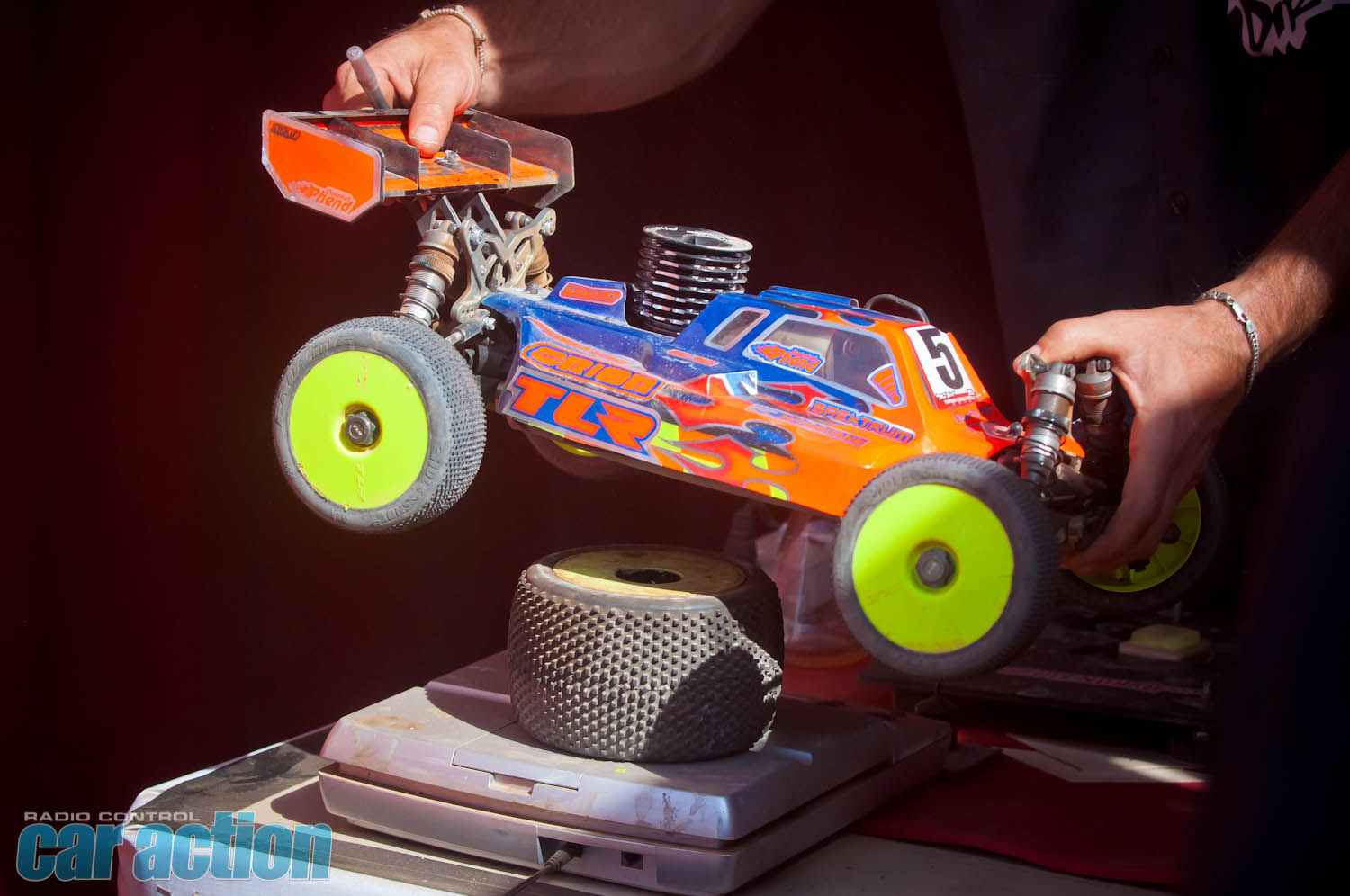 Phend’s first round didn’t get off to the best start – after two great laps, he committed two mistakes and slipped back as far as eighth in the heat. His last six trips around the track, however, were flawless – including the fastest lap of the round – and Phend came roaring back to take not only the lead in the heat but also the round win by over three seconds. 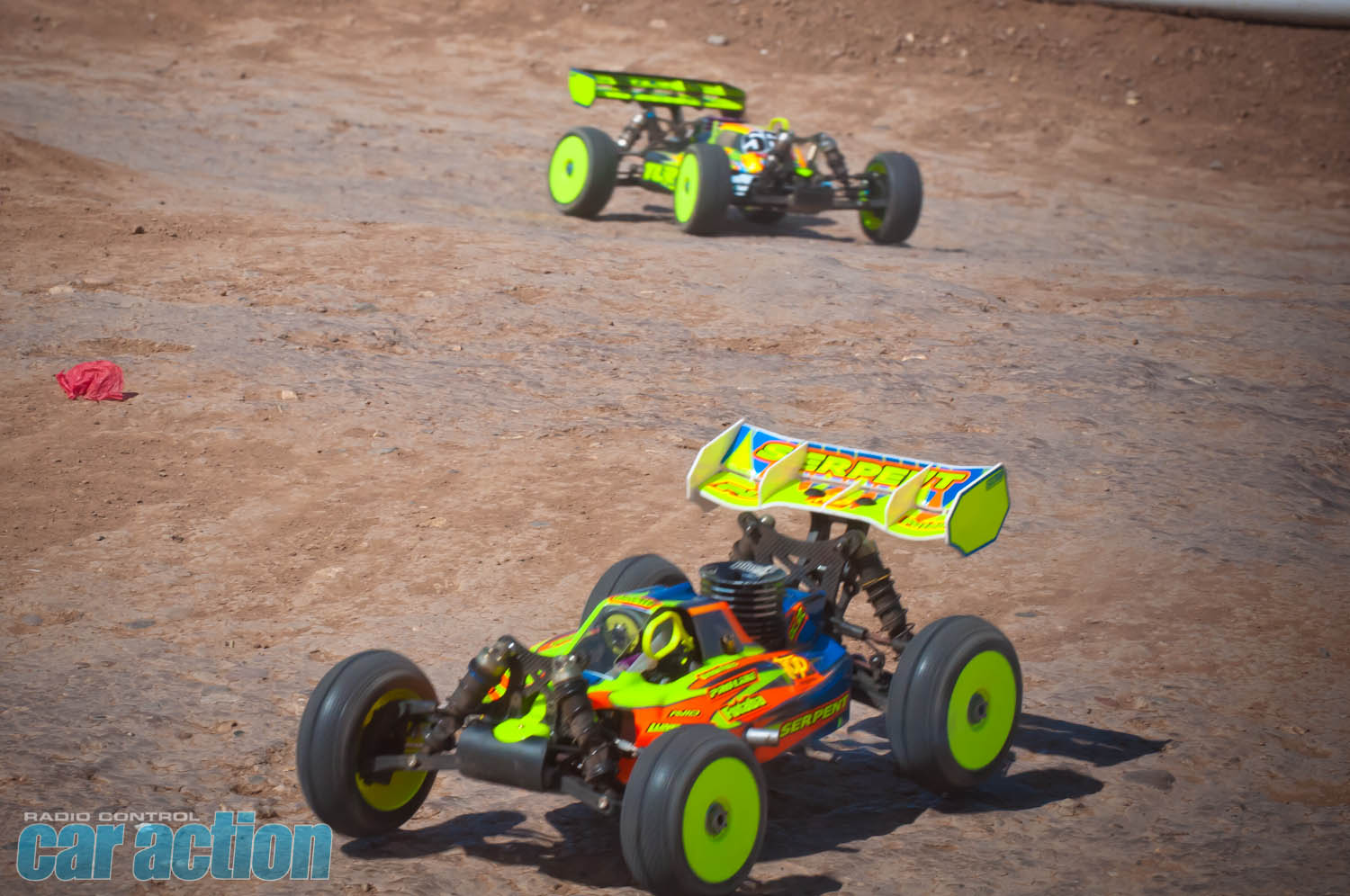 In his nitro debut with Serpent, having already driven into the Pro Truck main yesterday, former winner Mike Truhe capitalized on his placement into the ‘C’ heat and the lighter traffic to set a fast time for a valuable second place finish in the round. Truhe was the first driver to make it by for the tenth lap; a bobble on the last lap cost Truhe four seconds, however, which was the difference between setting the TQ time and settling for second.

The second round of buggy racing followed a prolonged intermission, caused by cars parked in fire lanes surrounding the track after the race directors decided to halt the program until the situation was remedied. What could’ve been a shorter day than Thursday’s Truck class qualifiers was dealt a huge setback, and the second round of Pro Buggy didn’t hit the track until after the sun, and the temperature, plummeted. Despite the cooler temperatures, a return to the normal watering schedule brought back the grip to normal levels and produced an easier time for most – with the TQ time being nearly nine seconds faster and nine drivers logging 10-lap runs versus just two in the first round. 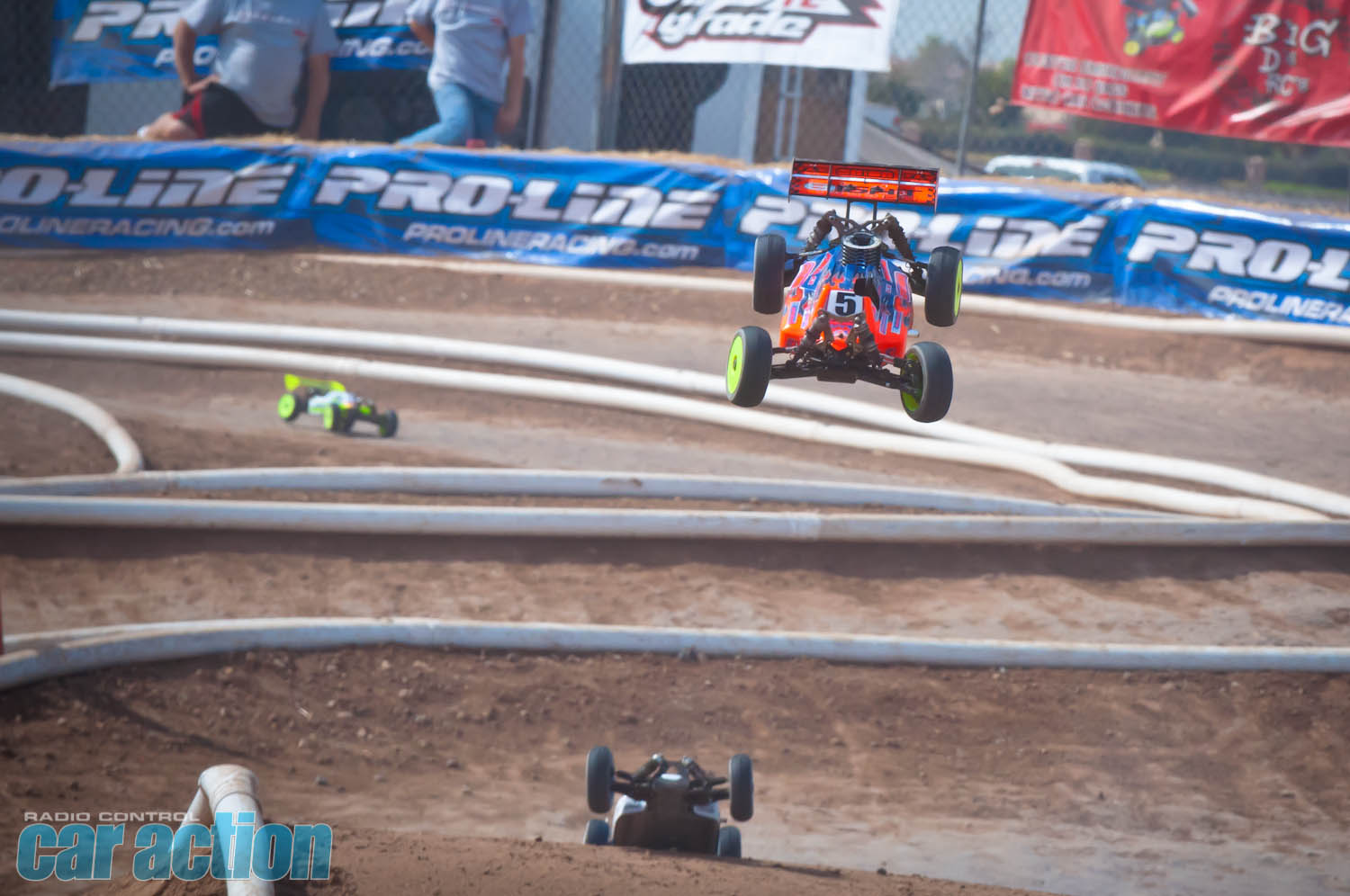 With his closest competitors in the first round both having poor runs, Dakotah Phend had the perfect opportunity to wrap up the overall TQ – but his race started with a bit of déjà vu with a crash on the second lap that cost him five seconds. Also like his first heat, however, Phend blitzed his way back to the top of the charts with a strong finish that included the fastest lap of the round and a four-second cushion on the field. 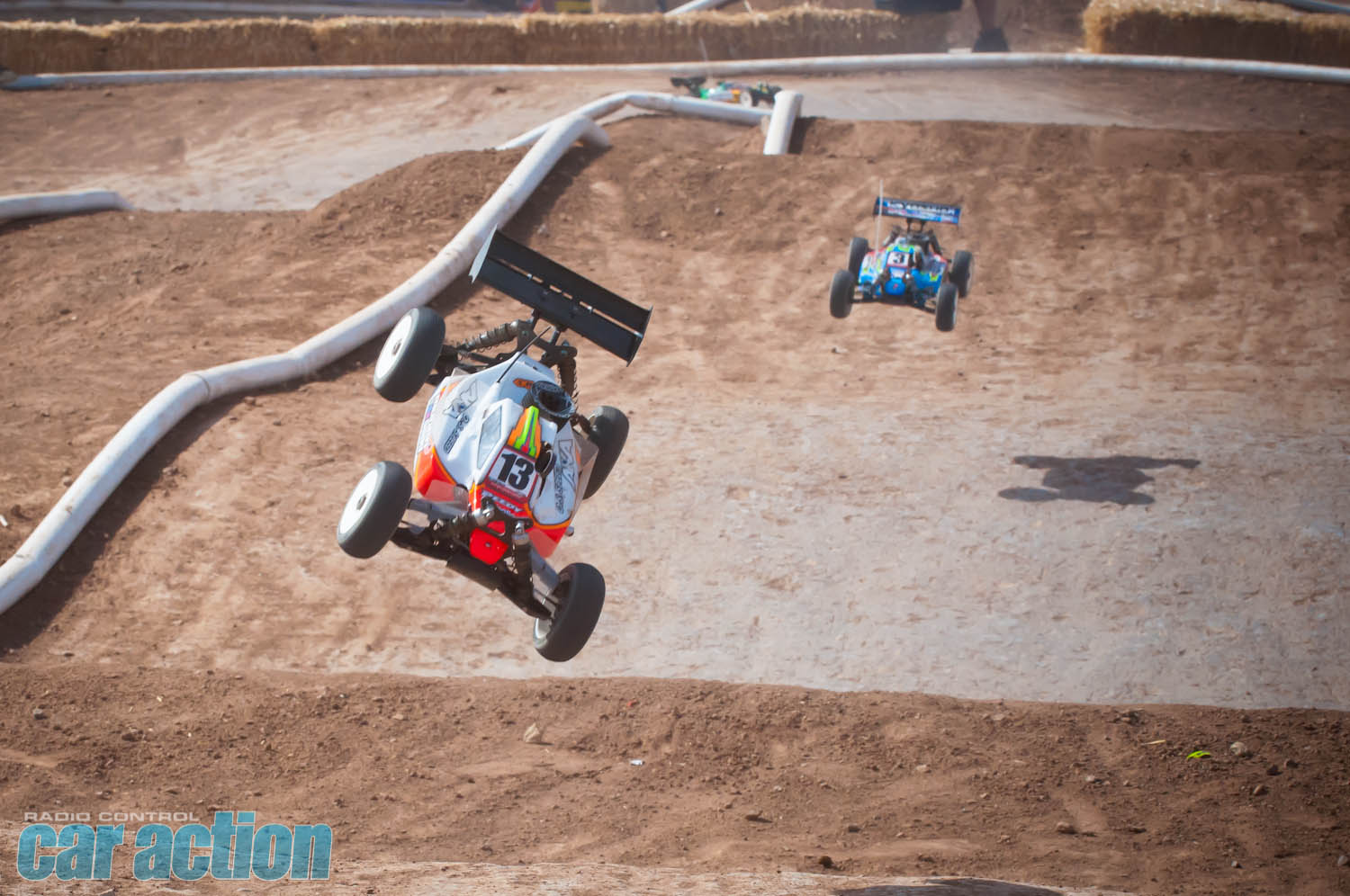 Carson Wernimont continued his incredible debut with Mugen Seiki by finishing second behind Phend, good enough for second for the round as well; together with his sixth-place finish in the first round, Wernimont should start in the top half of the A-Main grid for Sunday’s one-hour final. He actually led his heat for a couple of laps around the midway point and Wernimont was the only other driver in his heat, besides Phend, to log a sub-45 second lap; he would’ve had a shot at setting TQ were it not for a small crash with just three laps to go. 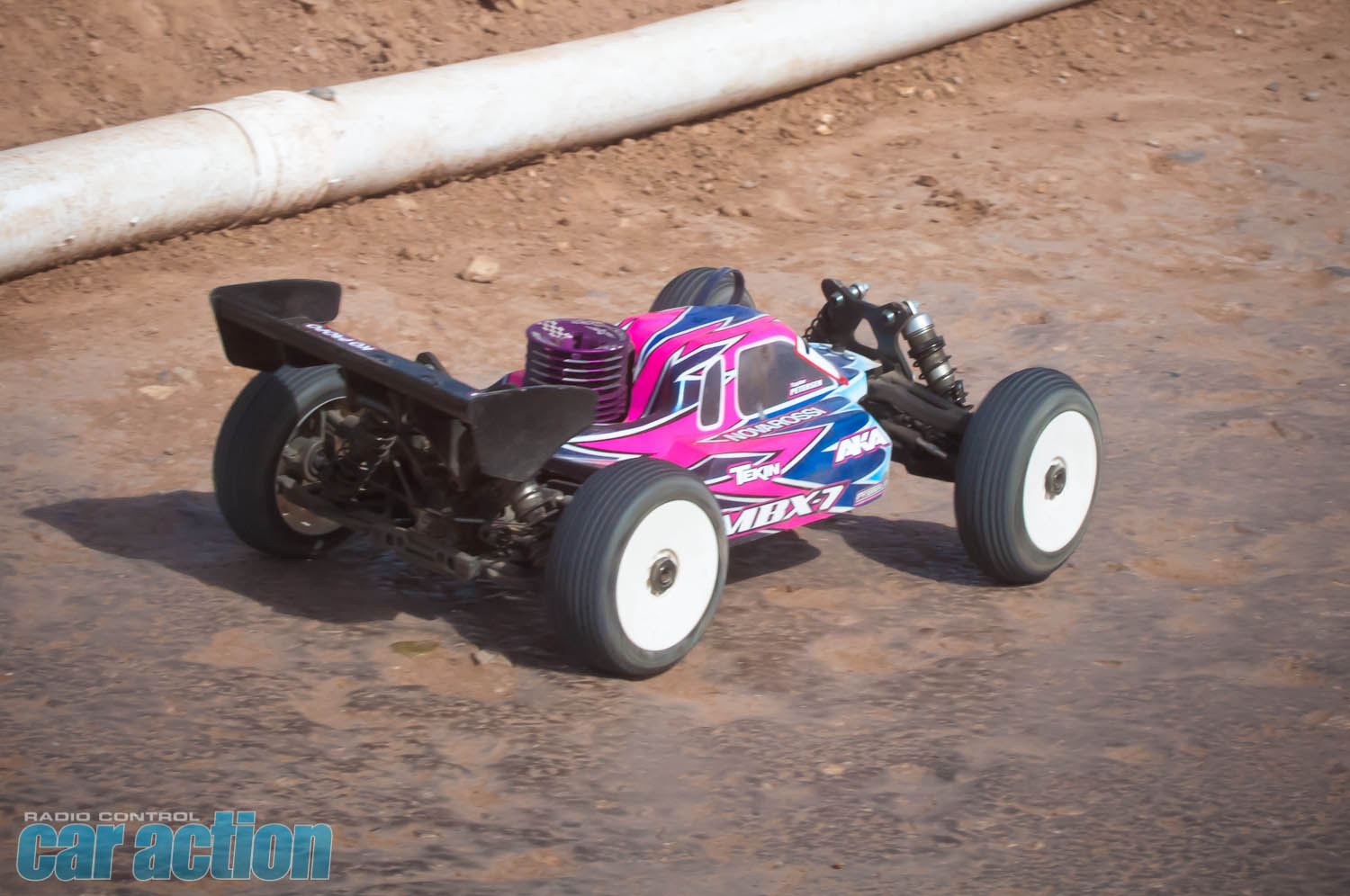 Taylor Petersen logged his best run of the week in Saturday evening’s second round. After a one-year stint with XRAY, Petersen returned to long-time sponsor Mugen Seiki to campaign the MBX7 buggy and also switched from Alpha engines to Novarossi for 2014. After a slow start, Petersen worked his way through the field from as low as fifth to take the heat win from Mugen teammate Barry Pettit with just two laps to go. 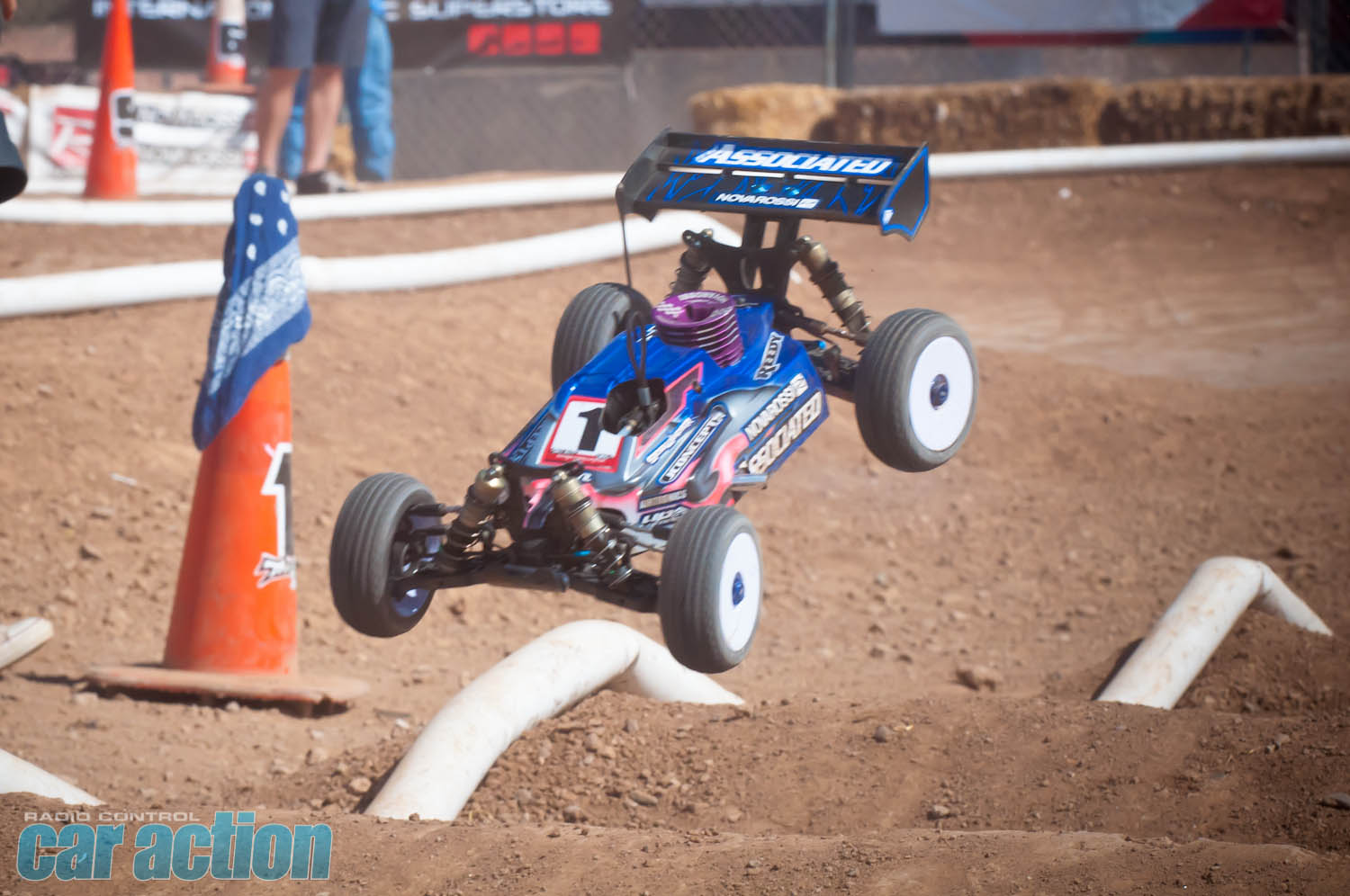 After a flameout knocked him out of round one, Ryan Maifield came roaring back with a fifth place finish in round two. A nearly flawless run from the ‘C’ heat set the early time to beat, but a small bobble in the beginning and a costly mistake with two laps to go left 3-4 seconds on the table – which could’ve moved him up as high as second!

Increasingly colder weather combined with a deteriorating track surface yielded a mix of the conditions from the first two rounds, with a new fast time for the day but only six 10-lappers completed on Friday night. Dakotah Phend, who wrapped up the overall TQ after two rounds, took the opportunity to try new tires in the final round and then pulled off after less than four minutes, leaving the door wide open for other drivers to grab some much-needed points. 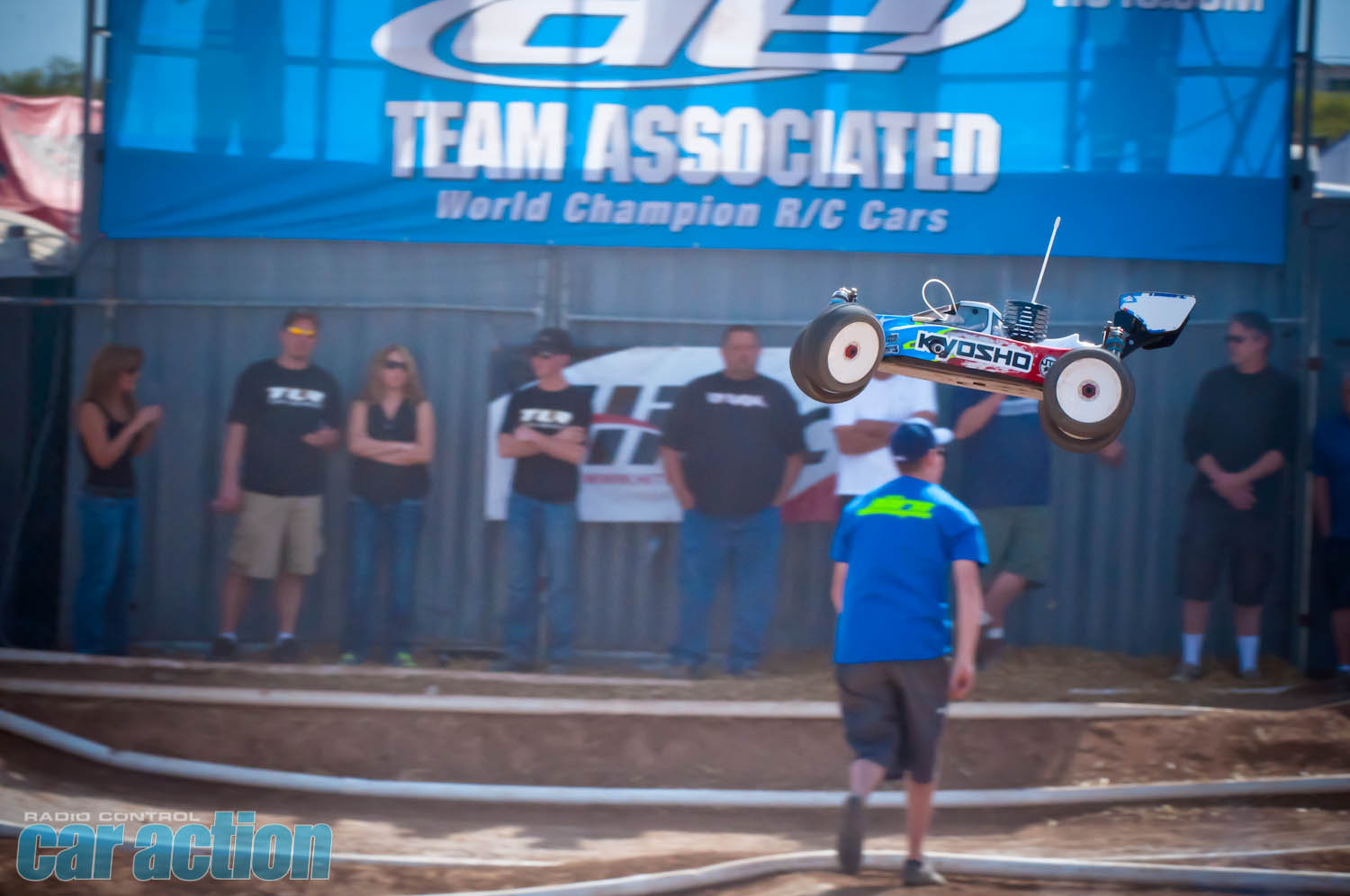 Jared Tebo clinched a spot in the final by winning the third round with the fastest time of the day, improving on Phend’s best by nearly three seconds and also finishing with the largest margin of victory – a nearly perfect drive earned him a time nearly six seconds faster than his nearest competitor. It was the best possible end to a day that started roughly (with a 19th place finish in the first round, and 7th in the second) and gives the former winner momentum heading into the main events. 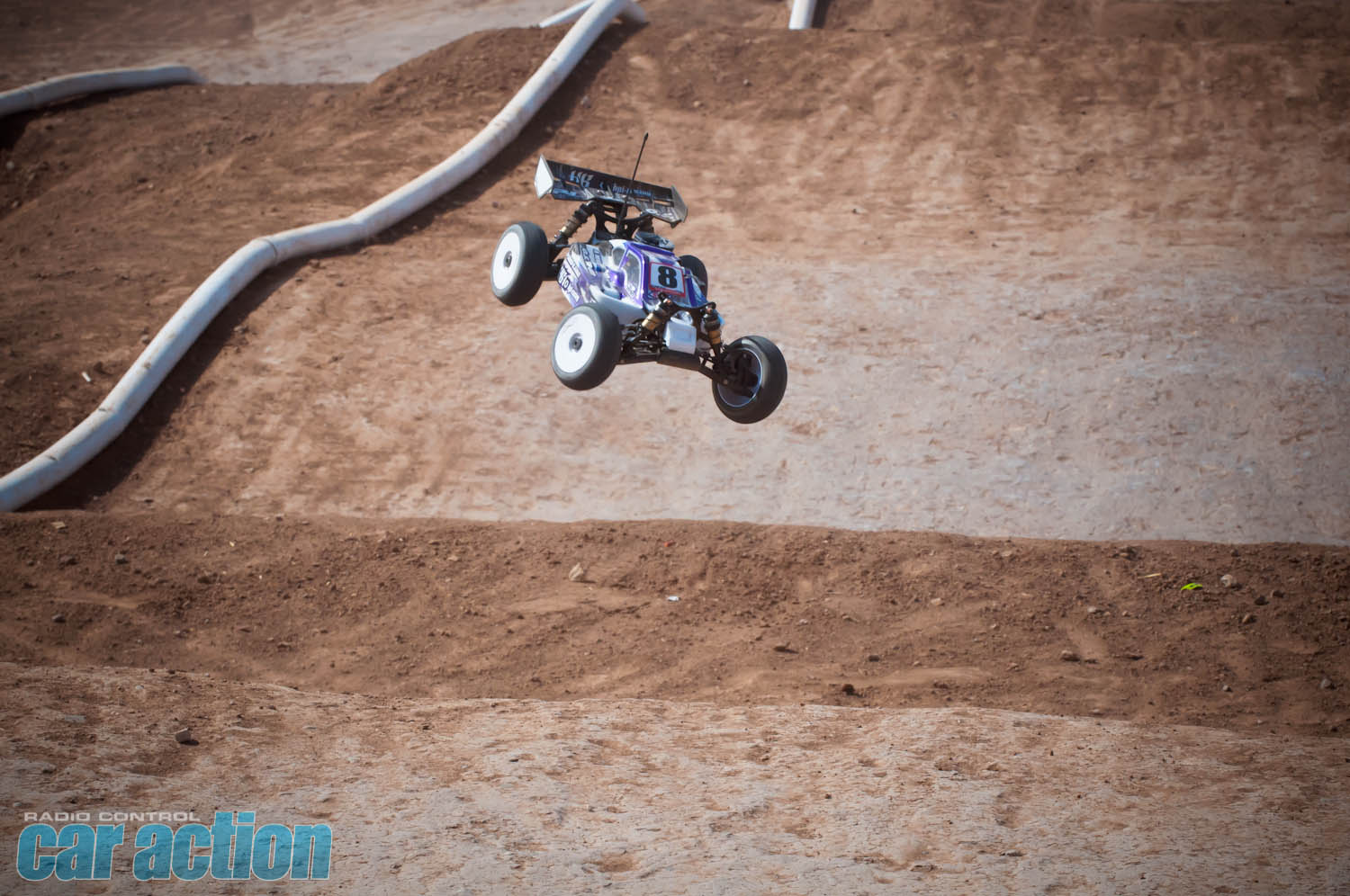 With Tebo winning the third round, Tessmann did exactly what he needed to do to hang onto the second starting spot for Sunday’s final – beat everyone else. Ty didn’t make any mistakes either, but just couldn’t match the blistering pace set by Tebo until the last three laps of the heat. The third round was Ty’s best, demonstrating that the Pro Truck TQ could have a shot at repeating his double win from 2012. 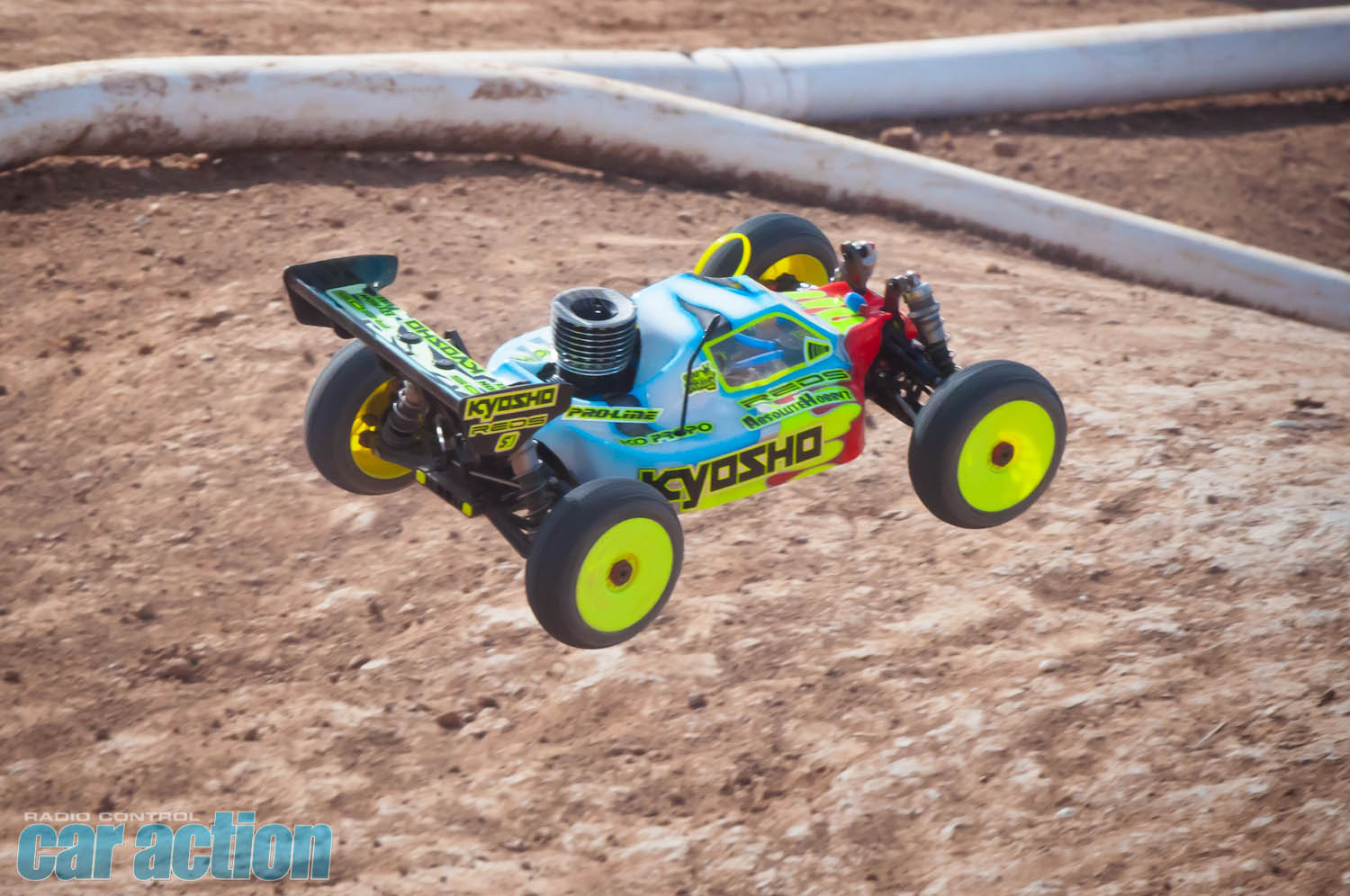 2010 IFMAR World Champion Cody King scored his best finish of the day, and his fastest time by nearly four seconds, to jump up the overall points standings with a great drive in the final round. Finishing third for the round allowed him to drop the 13th place finish from round one and move him up one spot from where he sat provisionally after two rounds. 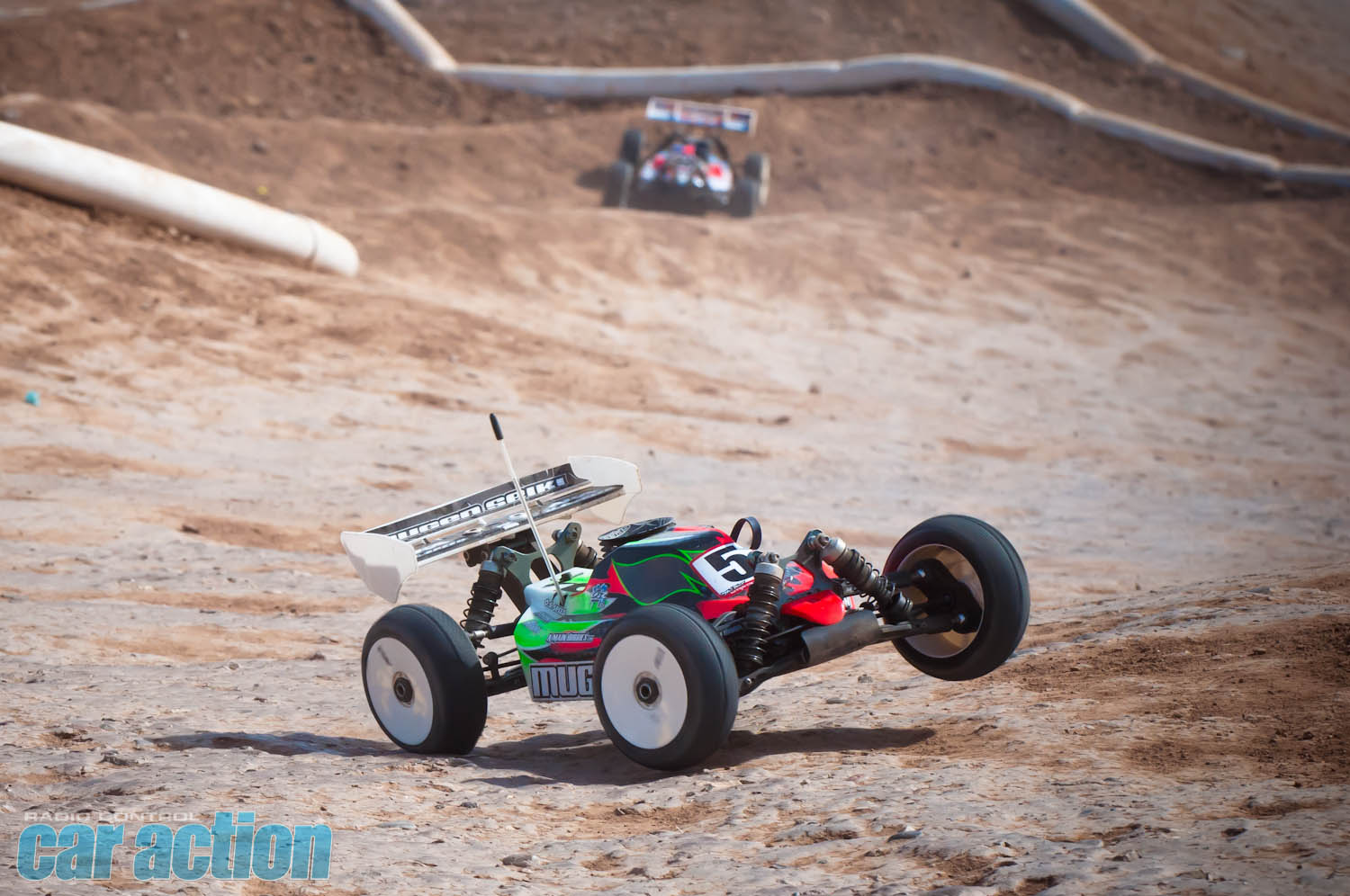 Call it an increase in experience, or the pressure and help of actually having teammates, but Mugen Seiki’s Barry Pettit is on pace to have one of the best runs of his career. The North Carolina native was solid all throughout qualifying and earned a well-deserved starting spot for Sunday’s A-Main. 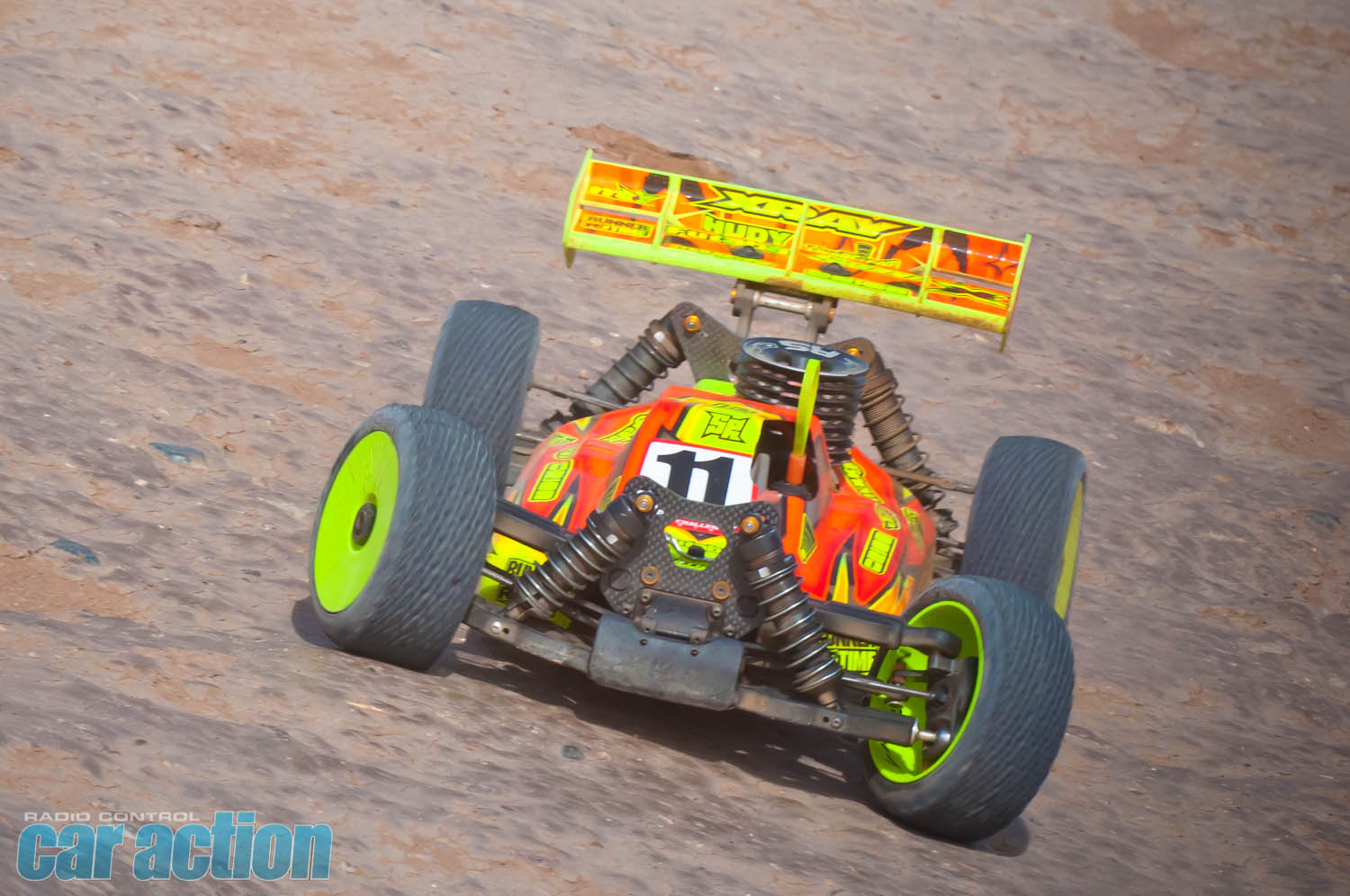 Frenchman Renaud Savoya finished a quiet eighth in the final round, joining Pettit as the only drivers to make the top ten in all three qualifying rounds. The former European Champion, who lived in Texas for a time while working for XRAY’s U.S. distributor RC America, is looking for his best finish on American soil. It’s interesting to note that in what has been such a heavy tire battle all week long between AKA and Pro-Line drivers at the top of the charts, with Barry Pettit and Ryan Maifield providing JConcepts’ best chance at success this weekend, ‘Reno’ is one of the few drivers using Sweep tires.

Almost 48 hours, and a full day of truck class main events, will pass between the completion of qualifying and the A-Main for Pro Buggy, but the twelve drivers guaranteed a spot in the big show could make this one of the most exciting main events in recent memory. There’s no mistaking Dakotah Phend as the favorite, as he was truly dominant in the first two rounds and looked untouchable. Like last year, at least two European drivers will compete for the win: last year’s fifth-place finisher Renaud Savoya, and 2013 European Champion David Ronnefalk. Unlike last year, at least three Mugen Seiki drivers will start the final: new signee Carson Wernimont, team veteran Barry Pettit, and the returning Taylor Petersen. There’s no guarantee, however, that the winner will be one of the drivers who are locked into the final – defending champion Ryan Maifield will have the chance to race his way in, as he’ll start first in the B-Main. 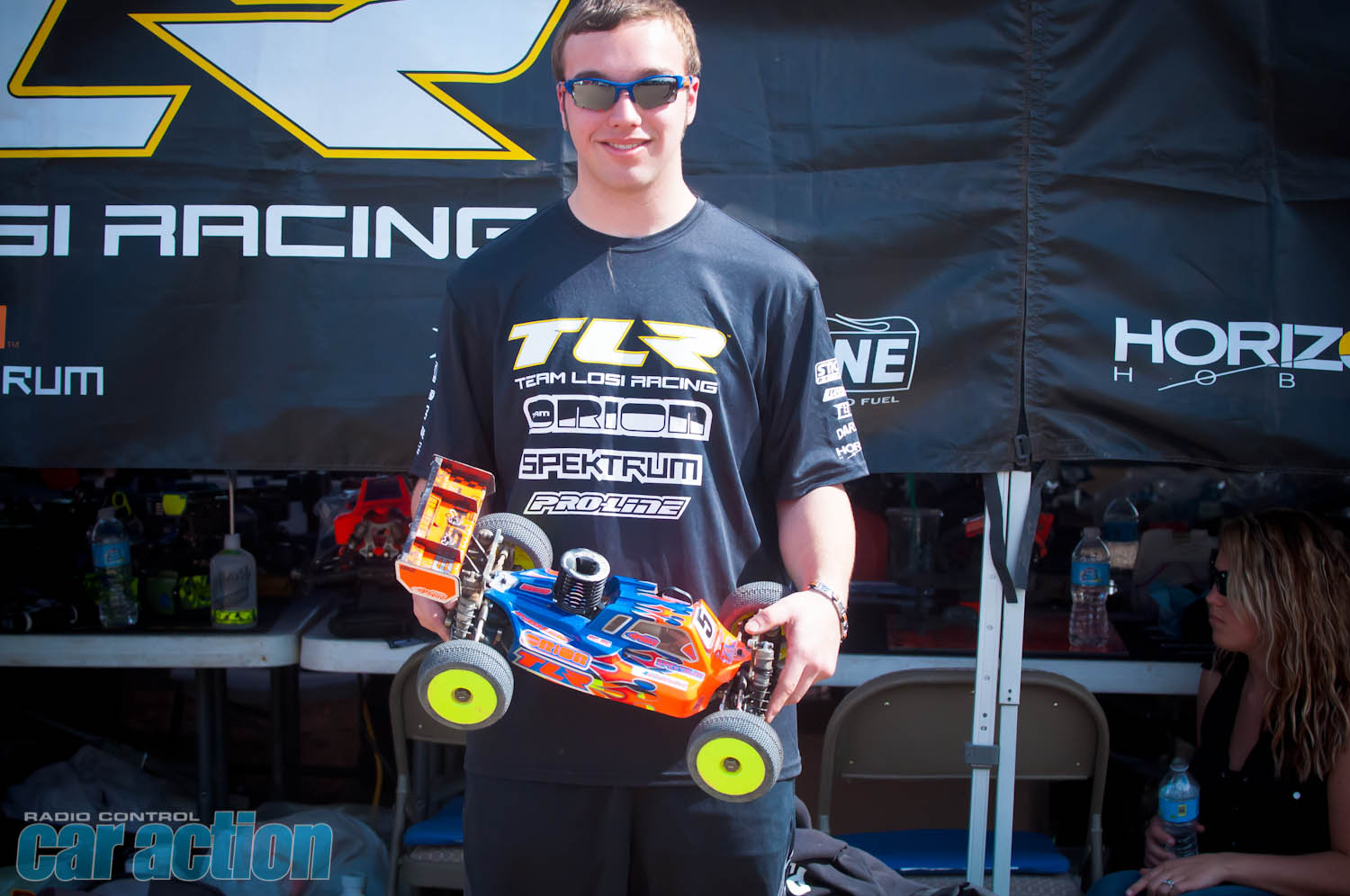