I’ll have to admit that as much as I love RC cars I’m not a big fan of constant maintenance. I’m sure others can agree that wrenching on your ride to keep it in top running condition comes with the territory, but if you can save yourself some routine maintenance then that equals more time having fun on the track and less time back on the workbench. A common wear component of RC cars is shocks, and when dealing with 1/5 vehicles the bigger the shocks, the more time and money are involved in repairs. So this is where Outerwears steps in with their Shockwares Evolution shock covers.

These shock covers are designed to keep dirt and debris out of your shocks and their moving components. When dirt builds up on your shocks it can slowly wear away your shock’s shafts and seals and lead to premature failure. By eliminating this from happening you can increase the time between shock rebuilds plus keep your costs down by getting more life out of the shocks themselves.

HPI does provide you shock “boots” that cover up where the shock shaft is exposed and I elected to keep those installed as extra insurance. But they only cover the exposed shock shaft and now with the Evolution shock covers installed I had plenty of protection. The only negative I found is that if you do need to change your spring rate you are better off removing the entire shock versus trying to slip off just the spring now, but that is a small price to pay for increased performance and more run time on the track. 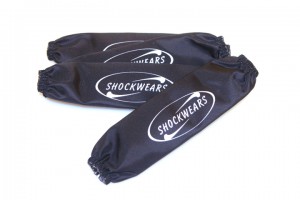