The 2010 IIC was hosted by Scotty Ernst and held in the Riviera Hotel and Casino in Las Vegas Nevada. The world’s best on road racers descended to the Riviera in hopes to become a champion. Drivers such as reigning world champion Mark Rheinard from Germany, Andy Moore from the UK, Atsushi Hara from Japan, and Naoto Matsukura from Japan would all be in attendance. Other notable drivers in attendance were Ronald Volker (Germany), Ty Tesseman (Canada), Kevin Hebert (Canada), and Juho Levanen (Finland).

This year’s IIC would have a new set of classes with the “ESC Spec” class that had 0 timing settings. This was the first major race to have such a class. This turned off any and all timing through the esc and once again brought stock racing back to stock speeds. Racers now had to focus on the fundamentals of stock racing: corner speed, ideal gearing and rollout, motor temperature, car setup, and perfect lines were all required to win one of these classes. To say the racing was tight was an understatement. Tech officials were commenting on how easy it was to tech and that nobody had an issue all weekend. To prevent cheating after tech once the race/run was over the drivers were not allowed to touch their cars, they had to be driven back to tech for post inspection. This was well thought out and executed by Scotty’s Tech staff. Great Job guys!

Tekin dominated early on with some of the fastest lap times of the week. Early on it was clear that if you weren’t running Tekin you were out of the show. Early on Team Drivers like Kenny Lambert, Monte Hess, Donny Lia, Mike Hanulec, Wes Lion, Brian Stanton and others were being called out with great frequency having the fastest lap times in their respective classes.

Tekin Team driver Donny Lia was on a mission with his Tekin Powered Speedmerchant Rev 6 1/12 GTP Car. Donny got faster every round in qualifying. Donny’s car would come into it’s own in the main jumping out in front and never looking back. Congratulations Donny!

The talk of the week though was the 17.5 Super Stock Class. The world’s top drivers all trying their hands at competitive stock racing some for the first time in decades! Most notable was Atsushi Hara from Hot Bodies. Hara teamed up with Tekin for the IIC in this heavily contested class. Hara’s first run on the track was fast but Hara still wanted to improve. Hara then worked directly with Randy Pike, Tekin’s Team Manager to get his setup nailed down. Other Hot Bodies Team drivers took notice and quickly switched to The Tekin RS Pro after seeing how fast Hara was going without any fading. After the final 2 rounds it was clear the two (Hara, Pike) succeeded. Hara’s fastest single lap time in the 17.5 Super Stock class was a 10.1! That is just a few tenths off of the fastest mod TC lap times of the weekend! Hara was quoted saying “it’s fast” and “the power feels great.” Hara’s car was super fast and had little to no fade during the entire run. His motor would come off 180-190 consistently. This setup would give Hara overall Tq and ultimately the IIC 2010 Super Stock Championship title! 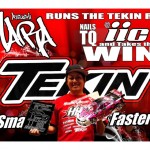 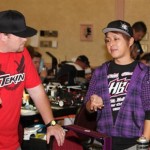 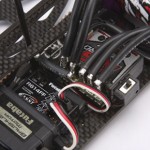 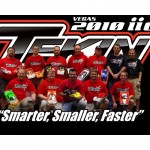