Jesse Munn Tq’d every round of 2wd Mod buggy with his Tekin powered B4. Jesse dominated taking both A1 and A2 in dominating fashion. Jesse used an RS and 8.5 Redline motor.

Jesse would again do very well in qualifying taking 3 out of 4 rounds in 4wd Mod Buggy again taking the overall Tq. Jesse won A2 and A3 and 2nd in A1 again securing his overall win! Jesse used the RS Pro and 7.5 Redline for his B44.

Again Jesse would dominate qualifying this time in Open Short Course. Jesse Tq’d 3 out of 4 rounds in this hotly contested class. Jesse again got a 2nd in A1, win in A2 giving him the overall win. Jesse was using a Tekin RS and 9.5 Redline motor.

Fellow Tekin driver Jeremy Potter ended up 2nd in 1/8 Electric Buggy. Jeremy was not having his best weekend overall suffering from mechanical gremlins most of the weekend. Fellow Tekin user Brady Jannsen(1st) ended up with the overall win, with fellow team driver Jason Hunt(3rd) rounding out the podium. 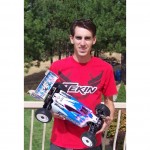 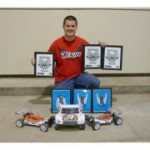