The first stop for the 2010 Electric Championship Tour was held at Four Season’s Raceway in Olympia, Washington on October 16th, 2010. The ECT is a 6 race series that visits a different track each month. The best 4 out of 6 races are used to determine the Champion for each class.

The 2wd Modified Buggy Class is the premier class for the ECT. This class always averages the most entries throughout the series in the modified division. After qualifying and the lower main bump-ups were complete, triple A-Mains would then be ran to decide the overall winner for round #1.

In A-Main #2 it was Shaun Dunlap that laid down a perfect main to take the win, Joe Pillars finished 2nd, and TQ Chris Bridgewater finished 3rd.

In A-Main #3 Shaun Dunlap once again made his way up to the front to take the lead and would hang on for the win. Daniel Lea would put on a good charge to finish 2nd in the main and that would give him 2nd overall. Joe Pillars would use his points from A-Main #1 and #2 to round out the podium for 3rd overall.

In the Modified Truck Class it was Kyosho/Team Orion Driver Shaun Dunlap who set the overall TQ.

In A-Main #1 Dunlap lead from start to finish, JC Johnson would finish 2nd, and Chris Bridewater in 3rd.

In A-Main #2 it was Chris Bridgewater who would take the win, Dunlap finishing 2nd, and JC Johnson in 3rd. 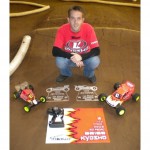 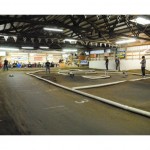 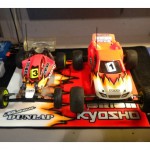