What is known at this time is that Axial has a new crawler in the works. A single image of a new rock crawler was leaked after a preproduction model was seen at the full-size off-road race known as the King of the Hammers. The King of the Hammers is a truly unique race that combines high speed desert racing with extreme rock crawling. This has naturally led to speculation that this new vehicle is designed for that sort of action–racing and crawling.  From what we can tell, this vehicle has a molded plastic cage and a new chassis. The axles may also be new. As we learn more from Axial, we’ll be sure to pass the info on to you. It’s worth noting that it appears that the following companies are somehow involved in this project: TJM, Griffin Radiator, Poison Spider, Corbeau and RDC. 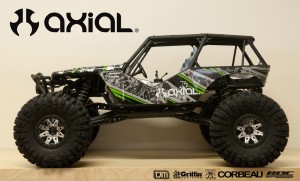 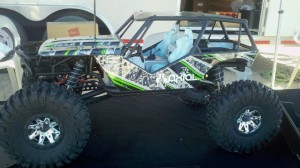