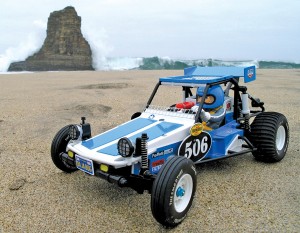 Tamiya Fast Attack Vehicle: Scott’s Tamiya buggy is a combination of stuff from the Tamiya lineup.  He started with a Fast Attack Vehicle for the base and added parts and queues from the Wild Willy and San Scorcher as well.  After painting it  up in Sand Scorcher colors, he added details to the buggy to give it a scale look;  everything from a NOS tank and fire extinguisher and even a Wild Willy driver outfitted with arms and gloves.  To finish things off, Ryan added a VW emblem and some license plates, as well as a handmade styrene rear wing, Scorcher exhaust, and Axial Lights to wrap it up. Well done, Scott!