I had never heard of the U.S. military’s Joint Robotics Repair Detachment until I came across this story issued by the Army and written by Pamela Proper. Check it out below.

Soldiers in the Joint Robotics Repair Detachment at Camp Arifjan get to do that daily. They are members of an elite program trained specifically to repair robots that are used for route clearance and Explosive Ordnance Disposal.

“Everything about the job is fascinating, especially knowing that robots can and do save lives,” said Smith.

“My team and I fix everything from the communication issues to replacing entire electronic assemblies,” said Smith. ”

Smith is so impressed with the training he and fellow Reserve Soldiers received that he encourages others to check it out as another military career option.

“The training that we receive at Selfridge, Michigan, is phenomenal. Basically, we learn how to operate, troubleshoot and repair all robotic platforms currently in OND/OEF,” said Smith. 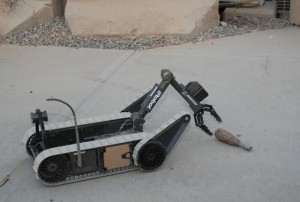 If you liked this story, check out this one about RC trucks being used to save soldiers lives in Afghanistan.