The 2011 Euro Off-Road Series was held this past weekend in Sweden. Race Organizer Uwe Rheinard who is the father of 3-Time Touring Car World Champion Marc Rheinard and World Famous Announcer Scotty Ernst were responsible for putting this great event on. Team Orion Factory Driver Ryan Cavalieri made the long trip over the pond with USA teammate Dustin Evans who would also be taking full advantage of running Team Orion equipment for this event.

Qualifying: Cavalieri went on to TQ overall in the 2wd Modified Buggy Class with his Team Orion powered Assocaited B4.1. Triple A-Mains: Dustin Evans would go onto win A-Main #1, then Cavalieri would win A-Main#2. The championship would come down to the third and final A-Main. At the start of the tone Cavalieri lead the field around with Evans close behind. Cavalieri and Evans were racing each other very hard and very clean. A slight bobble by Cavalieri allowed Evans by for the lead. With 2 laps remaining Cavalieri was looking for a way around Evans. Dustin kept it clean and would cross the finish line first to take home the win!

Qualifying: Dustin Evans would TQ the 4wd Modified Buggy Class with his Team Orion powered Losi XXXGP. Triple A-Mains: Evans would take full advantage of his TQ position and win A-Main #1 by over 7 seconds. Cavalieri regrouped quickly to take home the win in A-Main #2. Once again, the Championship would come down to the third and final A-Main. Cavalieri would go onto dominate A-Main #3 and take home the 4wd Modified Buggy Championship!

Qualifying: Dustin Evans would TQ his 2nd class of the weekend in the 2wd Modified Short Course Class with his Team Orion powered Losi XXXSCT. Triple A-Mains: Evans was on a level of his own in A-Main #1 being the only driver to make it by for the 13th lap. In A-Main #2 the racing would be a little closer but Evans would still take the win by over 5 seconds. This giving Evans his 2nd Championship of the weekend! 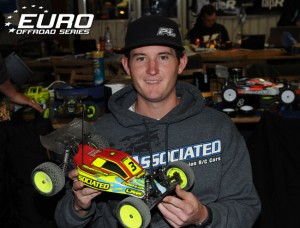 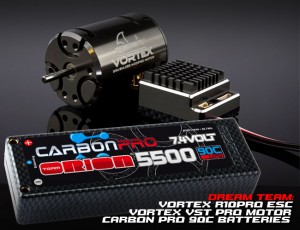 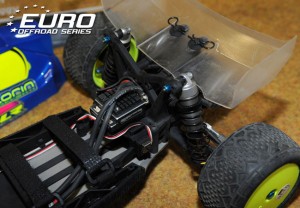