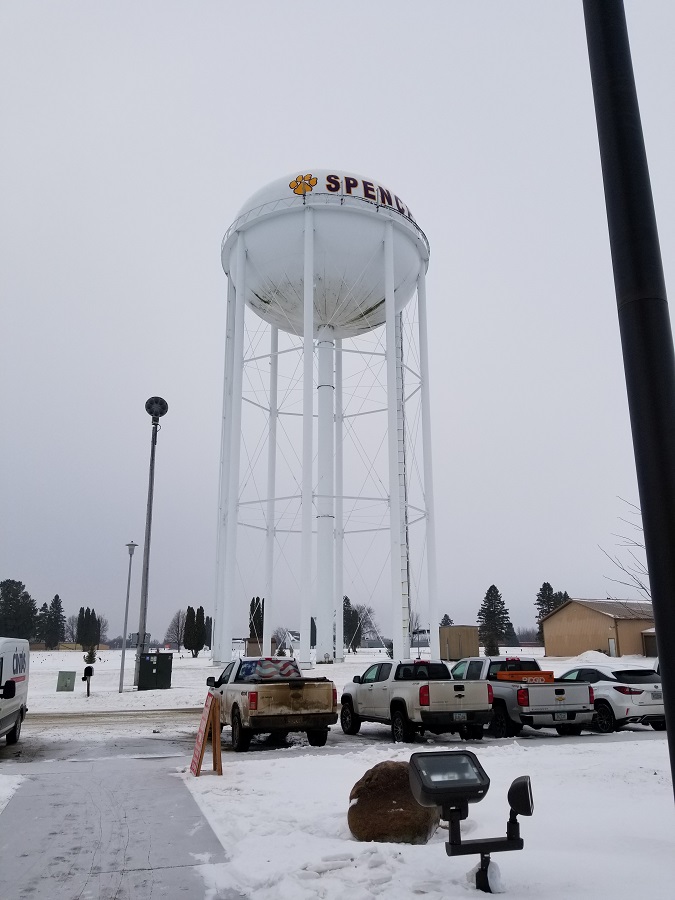 This past Saturday I made my way over to Spencer, IA to attend the 3rd Annual February FreqOut. This yearly trophy race is organized by the Spencer Radio Control Park Corp as part of their scheduled events over the Winter season. 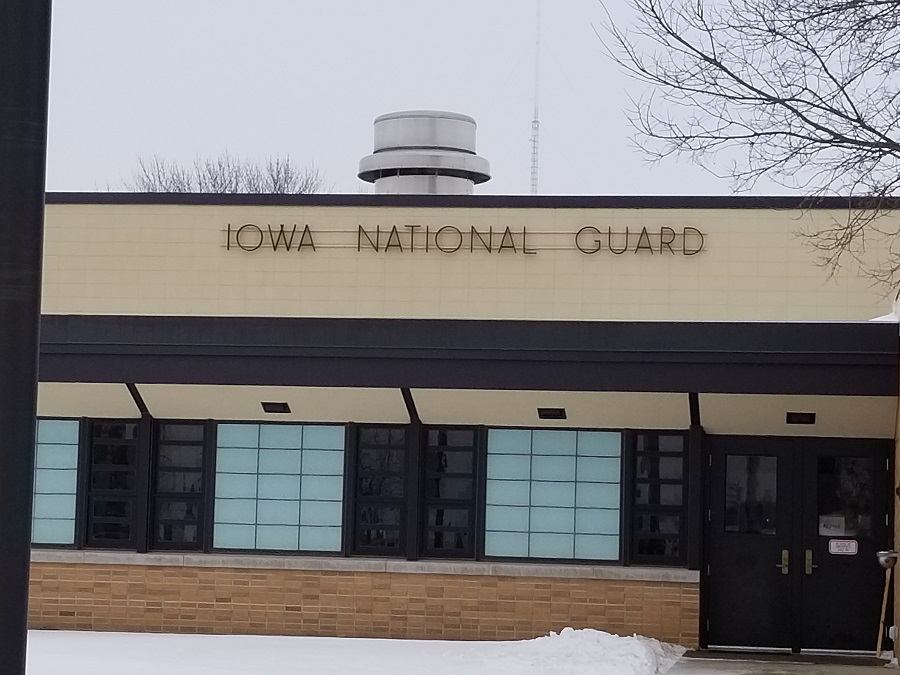 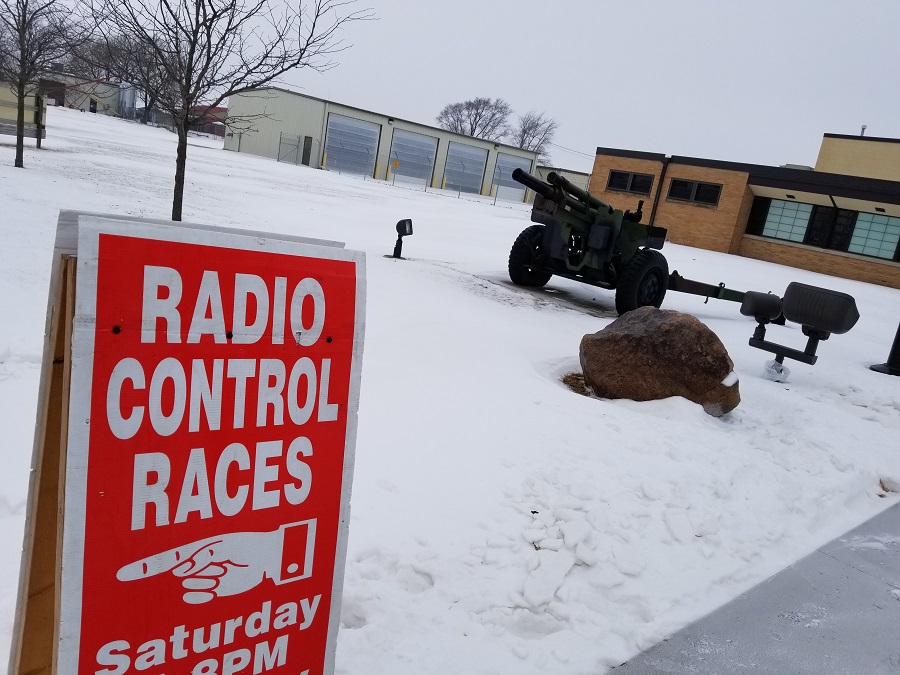 On Friday they went to the local Iowa Army National Guard to lay down the temporary carpet off-road track. 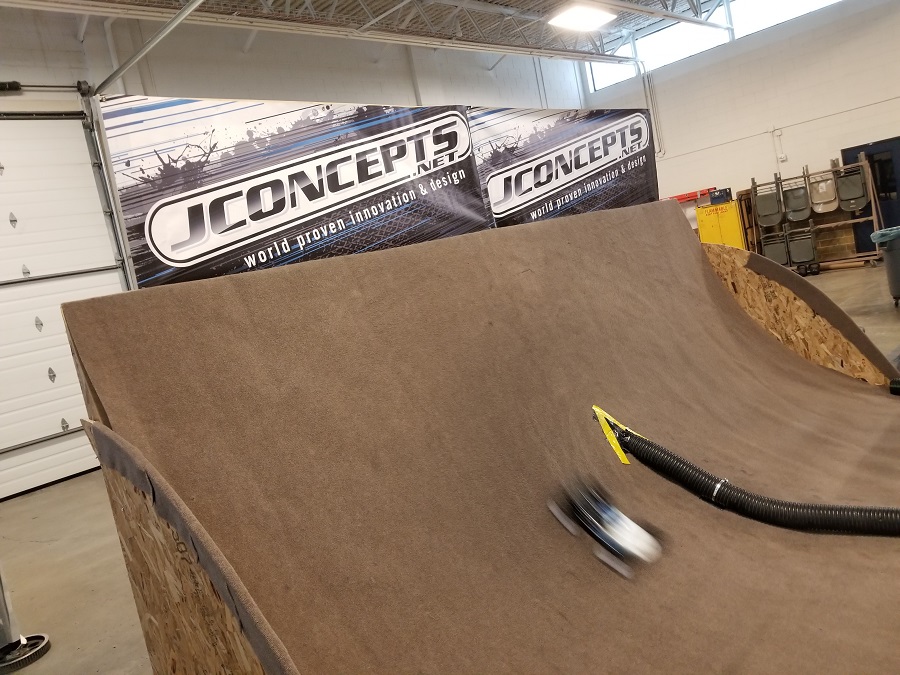 The track layout had a nice flow to it with a large wall ride before the lengthy straightaway. 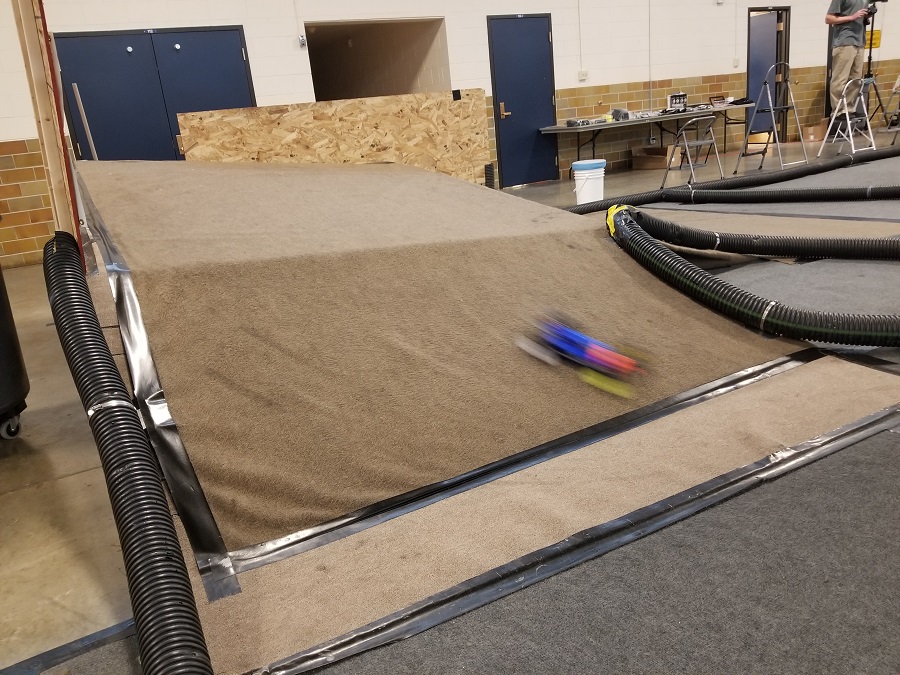 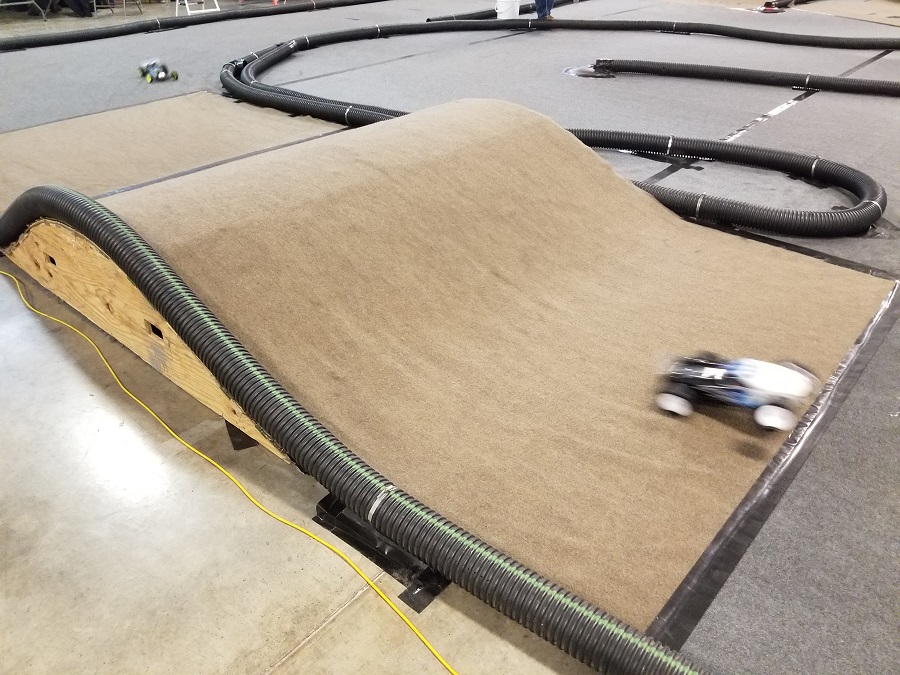 There wasn’t a lot of technical or rhythm sections in the design, but that instead made for a fast, free flowing layout that required steady concentration since one crash could ruin your chances of winning that day. Most drivers ran off-road tires designed for carpet racing but a few drivers were spotted using foam tires too. Either one seemed to hook up on the carpet surface which made for some fast, action packed racing. After the track was laid out, open practice ran from 4-9pm that night. Saturday morning the doors opened up again at 8am for more open practice. 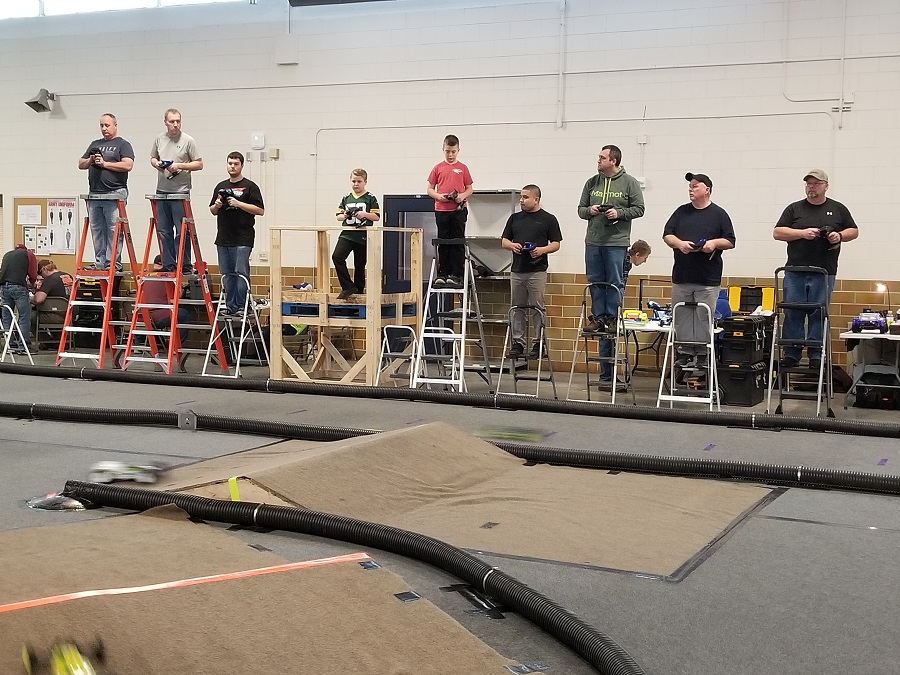 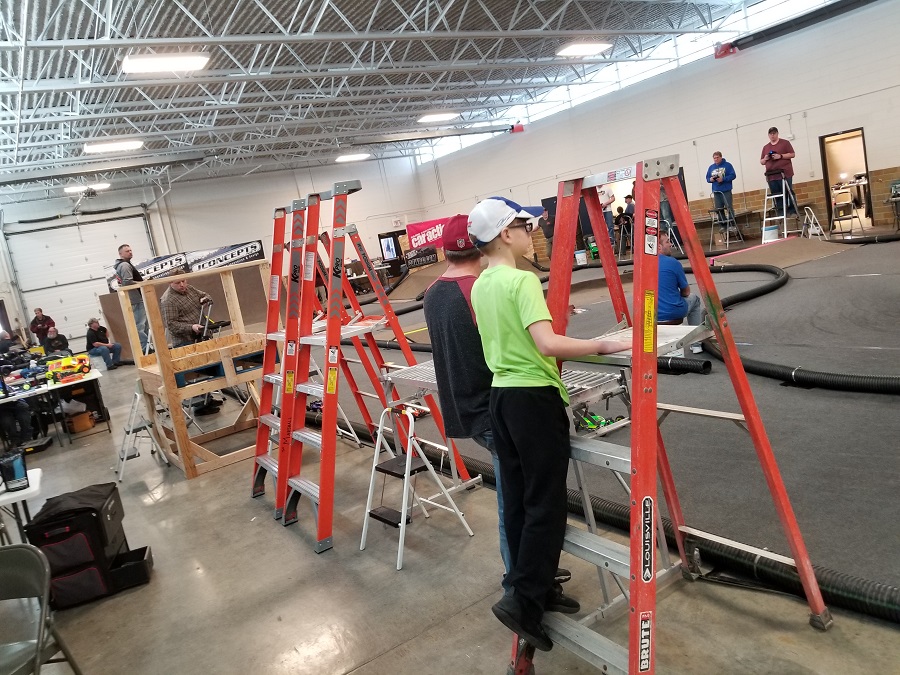 One unique feature about this race was that since the track was setup in a temporary location there was no dedicated driver’s stand big enough to hold multiple racers. So many drivers brought along step stools and full size ladders to use when they were racing, but some also chose to simply stand next to the track. And you could pretty much stand anywhere you wanted to along the perimeter of the track so visibility from the driver’s stand was not a problem at this race. 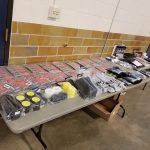 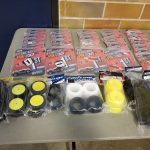 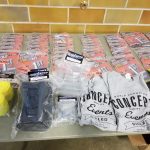 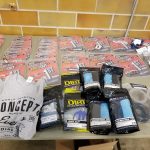 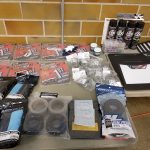 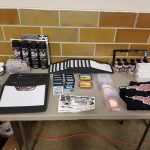 After all the drivers were signed up for the event, the racers were treated to some awesome door prizes courtesy of the event sponsors! 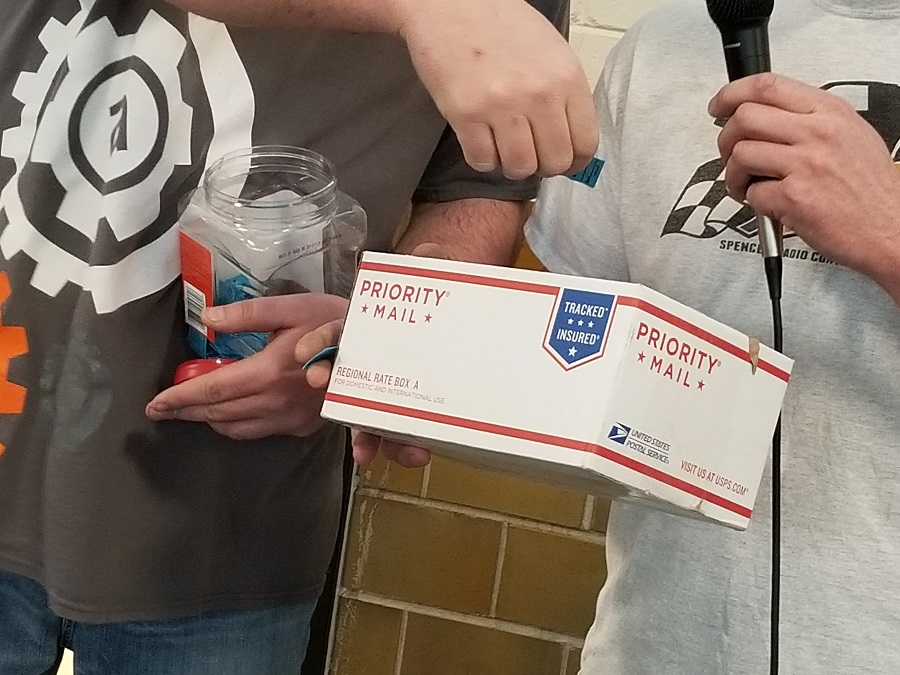 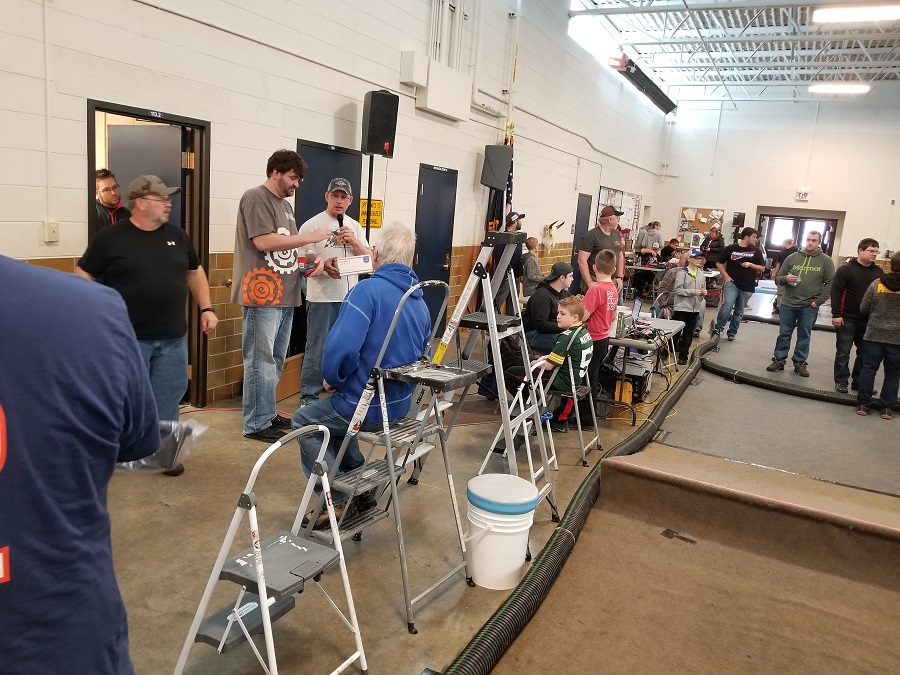 Each paid race received one ticket and most were lucky enough to have their number drawn more than one time that morning! 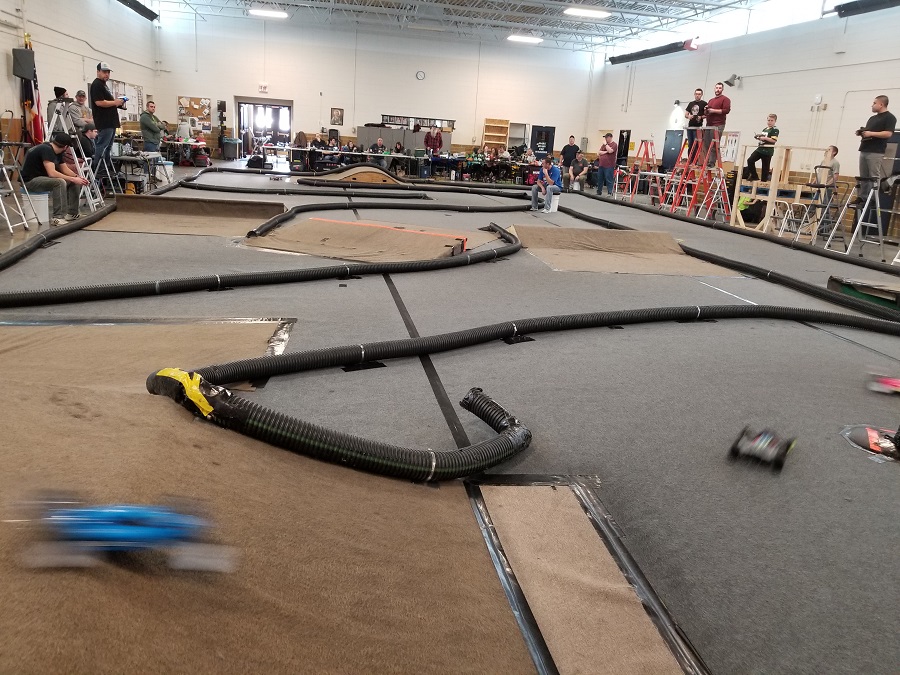 After the door prizes were handed out there was a brief break before we started qualifying at about 11:45am. The race format called for two rounds of rocket round qualifying. This meant your best run of the day would determine where you started for the mains. The top six drivers were locked into the A mains, and two drivers from the previous lower main could bump into the A. 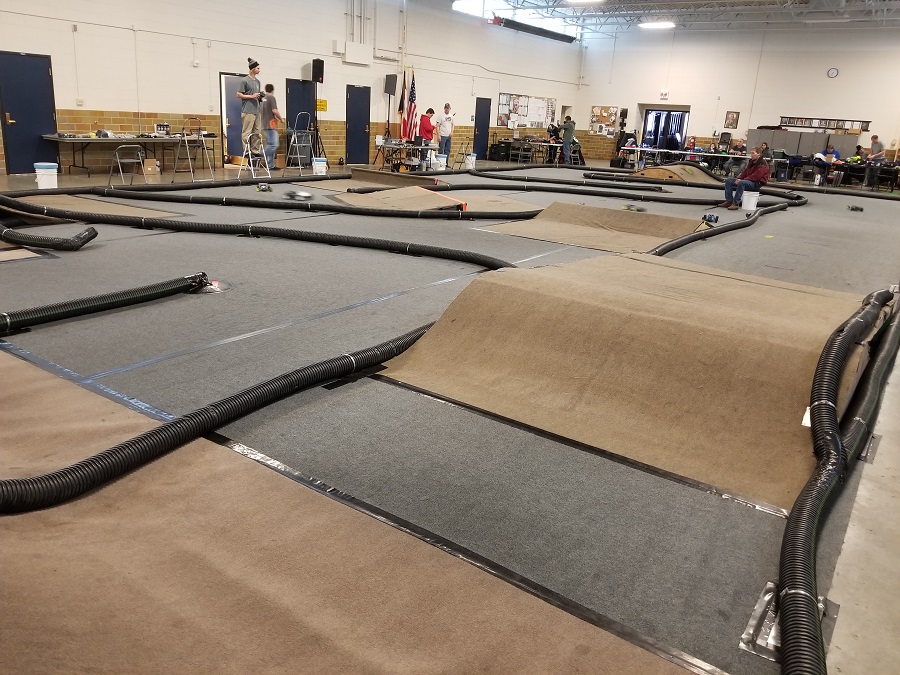 So this meant the top eight drivers in each class would take home some hardware, but the top three finishers in the B Main that didn’t bump into the A (so positions 3-5) also received some hardware too for their effort that weekend! 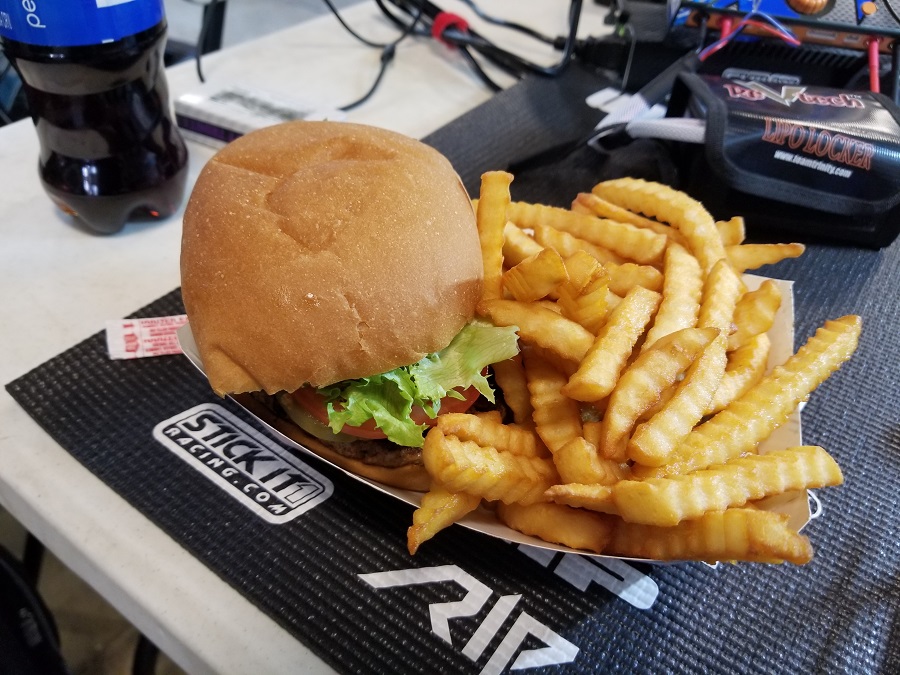 Also around that time drivers were able to order some on site concessions courtesy of McCreary’s Creative Catering. There were plenty of options to choose from and it is always nice to be able to grab a bite without having to leave the track!

There were seven classes to compete in that day: 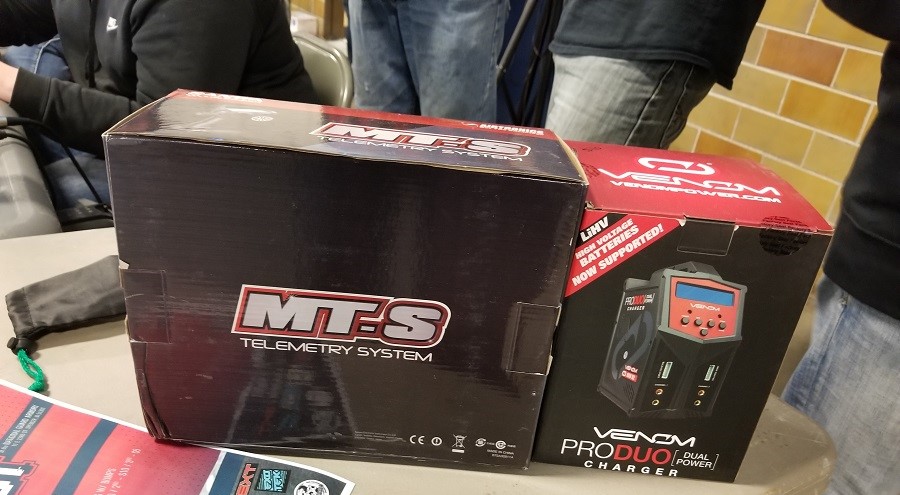 Once the qualifying was complete we had some down time before we rolled into the mains. Earlier in the day drivers could purchase special raffle tickets for a new Airtronics radio and Venom dual charger courtesy of TBRL (Tony Bacon Racing League). 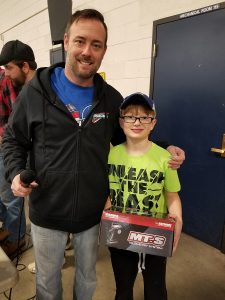 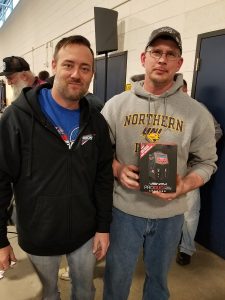 Tony Bacon presented each lucky winner with the special prizes and it was nice to see someone giving back to the RC community! 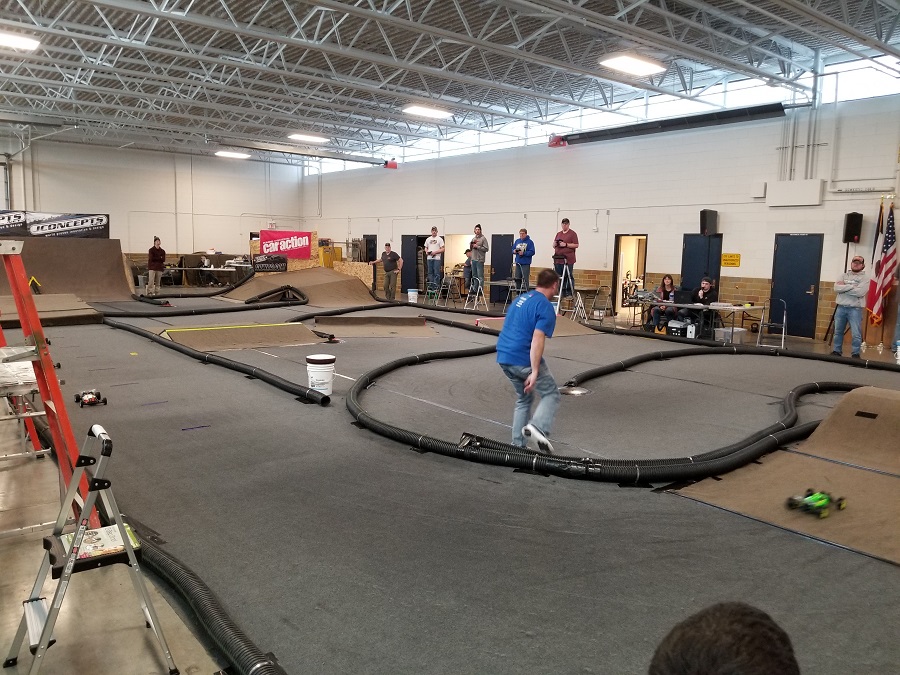 Shortly there after we started up all the lower mains. All the previous qualifiers and lower mains ran for five minutes, but the single A Mains were six minutes long. So that made for great racing and exciting finishes as drivers tried to bump their way up into higher mains and take home the hardware that weekend. 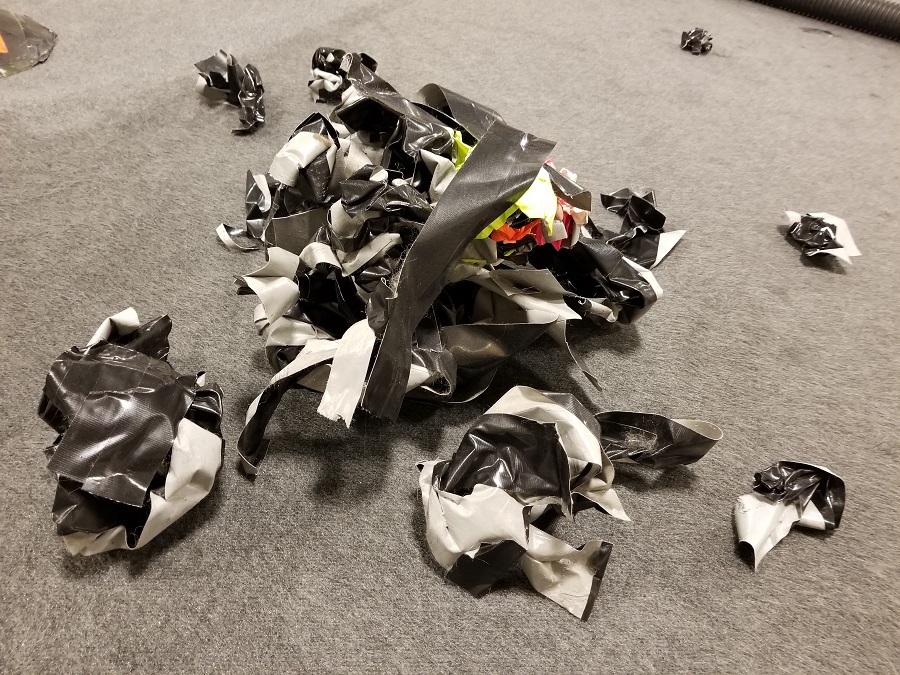 Just a small sample of the amount of tape needed to secure the track surface that weekend!

Below you’ll find pictures of the top three finishers in each class plus a link to the videos I captured that day too. I had a great time at this event and I can’t wait to head back to this race next year! Till next time!! 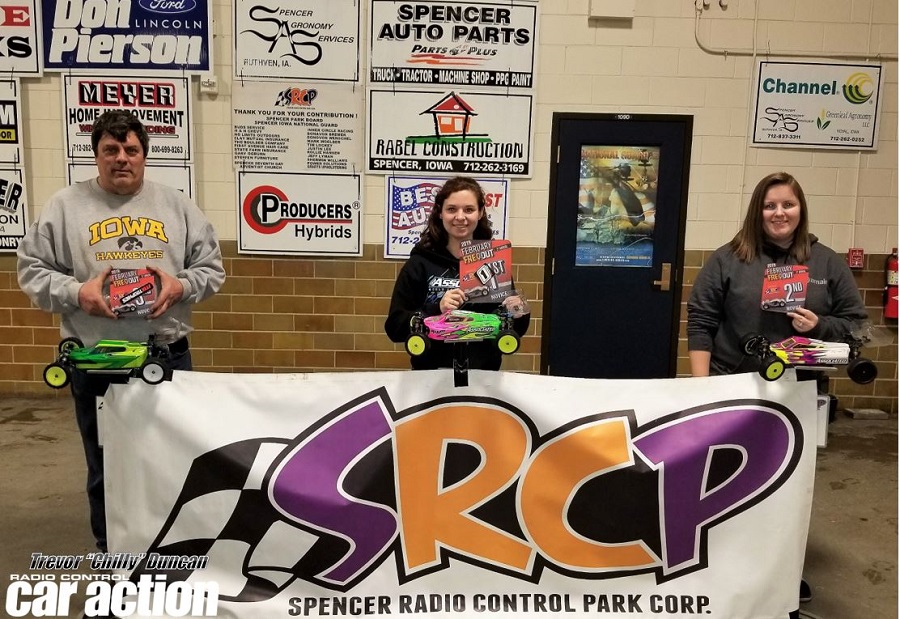 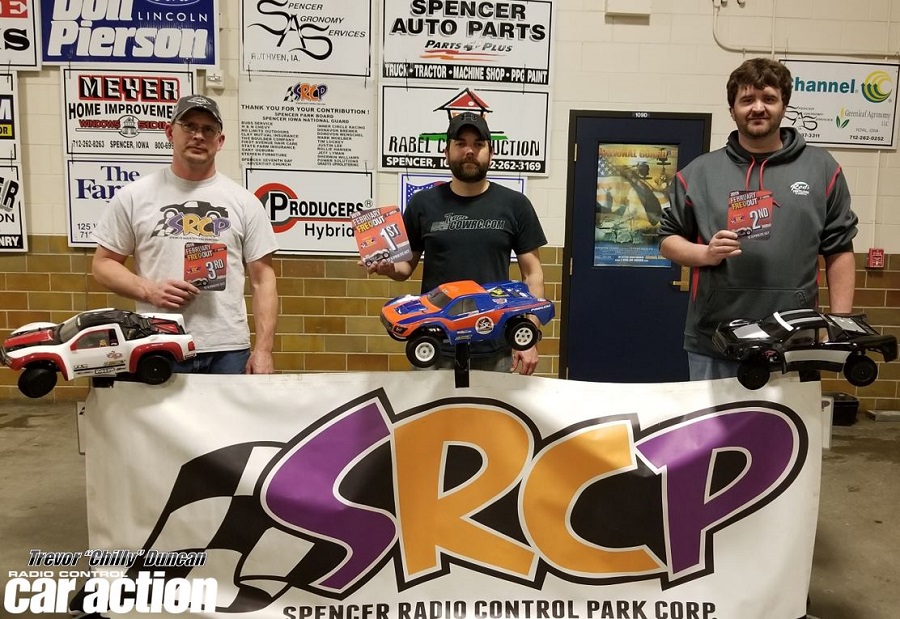 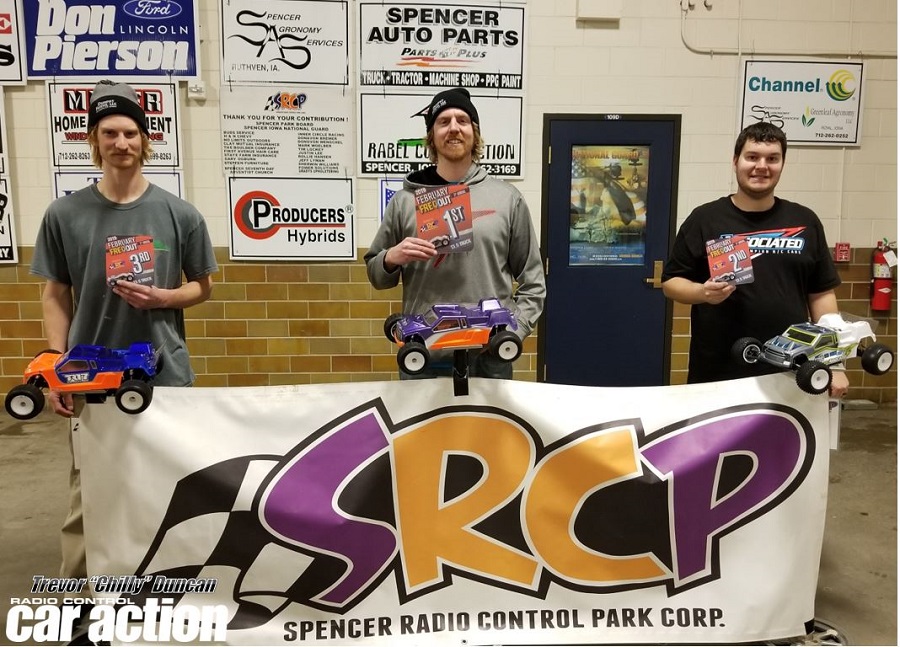 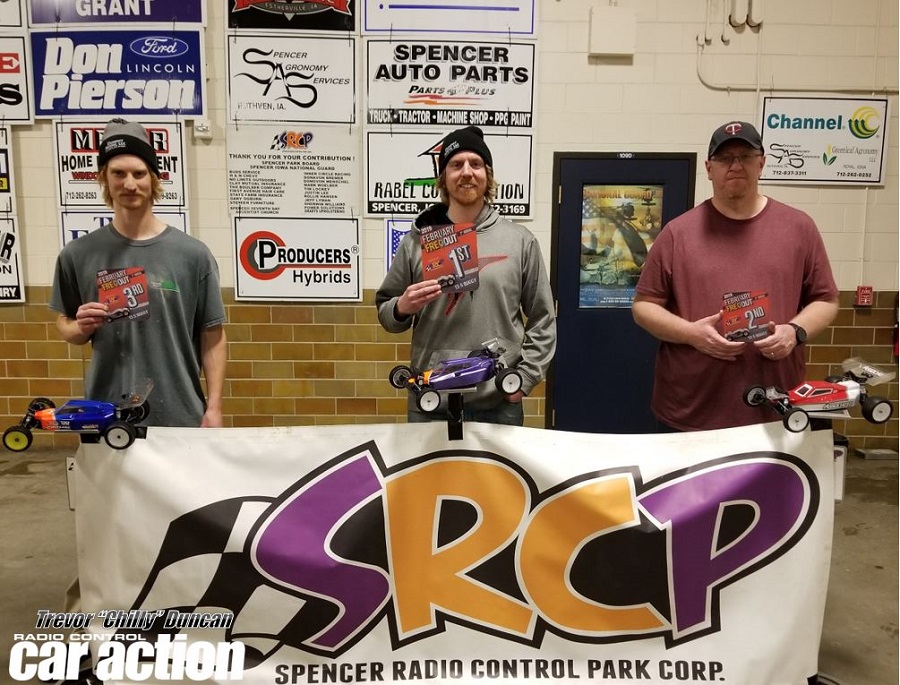 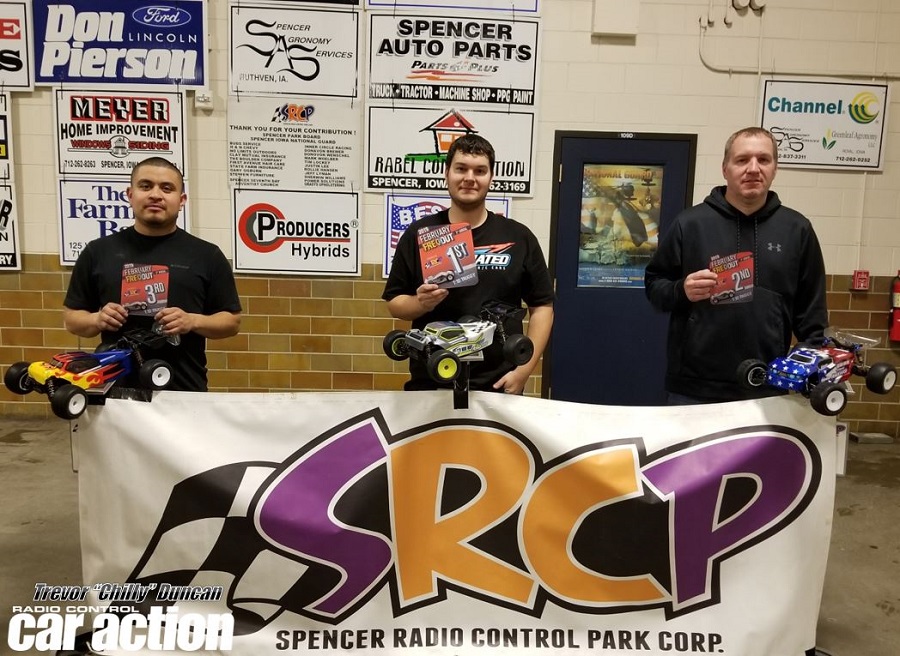 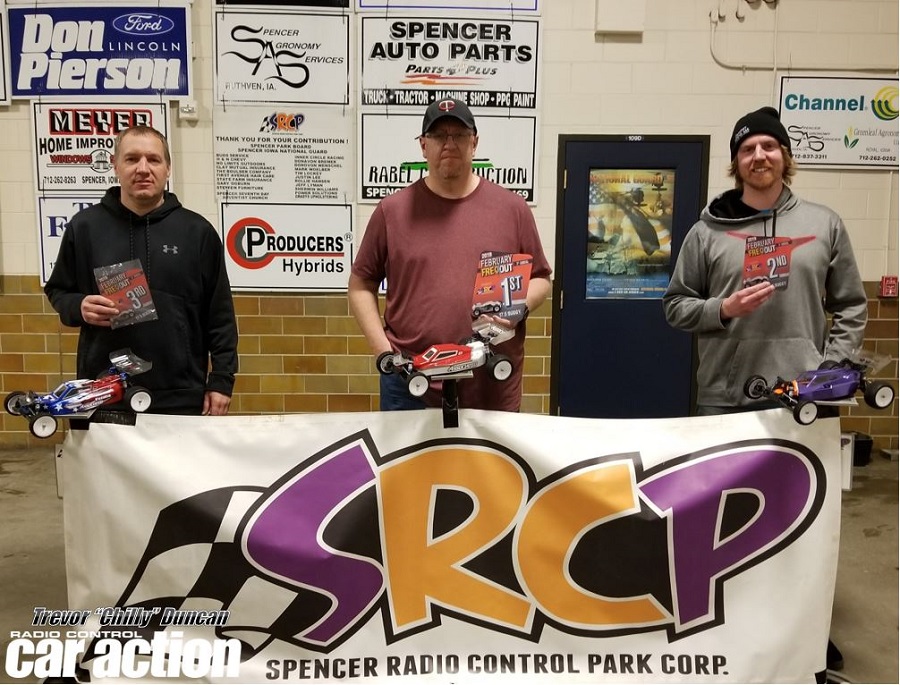