The first ever Motown Showdown in Modesto, California was held May 13-15 which capped of to have around 75 entries. In 2wd Mod Buggy Zack found himself tarting 2nd behind Cody Turner who set the fastest pace in round two, three seconds over myself ,Tekin teammate Derick Stephenson found himself starting 5th. Zack Rogers Tq’d all three rounds of 4wd Mod Buggy and set track record for fast lap, 24.7!

With a good chance of rain on Sunday the plan was to have two A mains at 10 mins each to see who would be crowned overall champion in each class. The 2wd main was up first and the weather had just given a sample of what was going to happen next. At the 6 minute mark rain started coming down. We finished up the race with Zack Rogers in the 2nd spot, Derick Stephansen(Tekin) found himself 4th overall after the long mud packed race.

Shortly after the 4wd main was up and I was more than ready as the track had dried out just a bit. The buzzer went off and Zack was gone. His Tekin powered Kyosho car was on rails all weekend and within three mins I had already streached a 3/4 track lead over 2nd place Cody Hughey. Zack would suffer a rare car failure while still taking 2nd. A2 would be called due to weather. 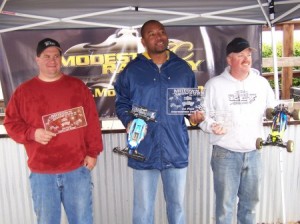