XXX-SCT takes victory at the 2nd annual Short Course Turkey Shootout at Hemet. Team Driver Kevin Gahan would TQ and take the win in 2wd Mod Short Course with his new XXX-SCT. (Kevin- the new 2wd XXX-SCT was really easy to drive and with the amount of corner speed the track has it really allows you to make less mistakes do to not having to drive the truck hard. I was really shocked how well the truck jumped. Everyone knows how Short Course trucks like to kite in the air and the new XXX-SCT does not seem to have this problem.) Kevin Gahan also TQed and won the 4wd mod Short Course class with a Losi prototype truck. Kevin powered both of his trucks with Xcelorin electronics and AKA Gridiron tires. The big talk of the weekend was the Stock short course class witch Losi drivers Richard Trujillo (Taking TQ) and Steve Westfall would take the top to spots on the podium. Also- The team of guys over at Hemet did a really fantastic job putting on this race and if you haven’t made it out to his Friday night races, you should. 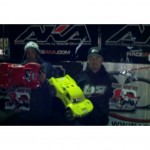 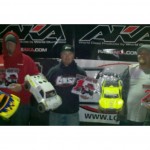 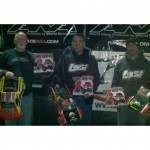