The Super Cup series rolled into Lutz, Florida, for round two of the Super Cup series. The fear of rain hung in the air all day, but there was nothing to find but bright Florida sunshine on the track. The dirt at Lake Park turned into terrific surface for some great electric racing. With over 80 entries, everyone at the track was thrilled to see such a great layout and surface.

After qualifying was all over, JR Mitch found himself on the pole for 2wd Mod and 2wd Short Course. Jason Ruona held off Mitch to start out front in 4wd buggy. JConcepts Flip Outs or DD’s filled the first three spots on the grid in each class. Mitch stated, “The Flip Outs had great forward traction early in the morning when the track still had a little bit of moisture in it.”

The first modified main that was up was 2wd buggy. Mitch used his starting position on the pole to stretch an early lead out over the rest of the field. The battle was between Leon McIntosh and Jason Ruona, the two would battle for much of the race. With just over a minute left, a few bobbles from Ruona would allow McIntosh to have some breathing room. Up front Mitch would lead everyone to the finish line to take his first win of the day.

The ultra quick 4wd mod buggies were next on the list for the modified drivers. Jason Ruona showed quick laps, that most would try to follow in both qualifiers. With 13 cars lined up on the front straight waiting for the horn, it was going to be important to stay clean the first few laps. It would only take one turn for chaos to unfold, with five of the first six cars ending up in a pile. With the fastest drivers now finding themselves in the back of the pack, they would have to work even harder to find a way to the front.

Ryan Eckert, running the JConcepts Double Dees, would find himself leading the pack after two laps. Mitch would soon join the party up front with Eckert, and take the battle all the way to the last lap. With just a few turns to the finish line, Eckert left the door open just a bit, and the hard driving of Mitch took advantage of it. Racing to the line it would be Mitch followed by Eckert, and Ruona rounding out the podium.

With two wins under his belt, Mitch was looking to go for the triple crown with a win in mod Short Course. With his Associated SC10 with JConcepts DD’s putting the power to the ground, Mitch dominated both rounds of qualifying. The main started with Eckert going door to door with Mitch for the first few laps, until a crash set him back. Mitch was able to break away, and drive away from the pack to complete the perfect day at Lake Park.

Modified truck was owned on this day by Leon McIntosh. The X-60 was on rails taking the TQ position and Leon went on relatively unchallenged in the A-main. Super Cup points leader Zack Genova made a strong run at the end coming within 3 seconds of Mcintosh but it was not enough. Zack Genova finished 2nd and Jon Faulkner took 3rd.

In Stock buggy Kory Ferguson, with his X-Factory buggy and JConcepts tires, was able to hold off Mike Applegate and Dave Duncan. Ferguson and Applegate took the race down to the wire, with the closest finish of the day.

With Ferguson taking Stock buggy by less than a second, Applegate was ready to return the favor in Stock truck. Driving a great race Applegate was able to pull away from second place Kory Ferguson and third place Jader Lopez, to take the race win.

Stock SCT was all Mark Valeo. Mark took the TQ and had a great start jumping into the lead and began to stretch it. Valeo took the win with Jeff Lynn finishing 2nd and Johnny Grant finishing in 3rd.

After the 1/10th scale classes were finished, it was time for the larger 4wd Short Course Trucks and 1/8th Scale electric buggies to hit the track. In Pro 4wd modified SCT’s, Felix Law attacked the grooved track with JConcepts DD’s front and rear to control his heavy truck around the busy layout. Turning the fastest laps of the whole weekend in the A main, Felix was able to take the victory over David Warr and Frank Martinez.

With the last race of the day rolling out of pit lane, the 1/8th scale e-buggies made every jump on the track look much easier. David Warr was able to hold off attacks from Spencer and Eric Varney to take the win, and put a cap on a great day of racing.

At the end of the day, this was one of the best races of the year for the Super Cup. The Hurricane crew provided a great track, and the weather was perfect for some great racing. 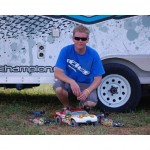 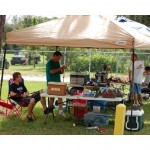 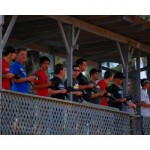 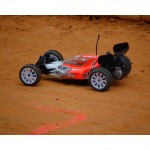 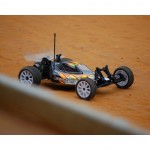 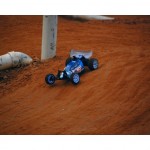