We 1st told you about this new body back in December of 2011, and now JConcepts has officially released it to the public. Plus, they now also offer their popular SC tires premounted to their +3mm 12mm hex Hazard wheels. Check out the press release below for more info:

Wherever you are, you’ll see a Chevy Silverado on the job. Chevy Silverado and JConcepts – work hard, play hard. Like a rock. Never one to relax, JConcepts introduces the 2012 Chevy Silverado 1500 SCT body. Starting with its low-profile design, beefy fenders and noteworthy Silverado appearance, the 1500 SCT body is inspired by the looks of a class leading full-size pick-up, loaded with performance and Hi-Flow features. Fitting on 6 different trucks as a direct fit and over 9 different vehicles overall, the Chevy 1500 is just what you have been looking for.

The air escape package on the Silverado consists of user friendly trim-out areas which have been strategically placed to ensure a clean race-able look that minimizes the trouble-some parachute effect. The large Hi-Flow areas are depressed into the body which allows the user to simply score the bottom pocket and pop-out for instant results. The Hi-Flow, reverse, hood-scoop, used predominantly as an under air release feature, blends beautifully into the sculpted extra-clearance fenders while releasing the front end of inner pressure.

Whether you start your day on the race track or in the back-yard, the Silverado packs a serious punch straight out of the package. The head-light and grill treatment scream Chevrolet while the extruded fenders and detailed body panel trim section brings a 3rd dimension to the vehicle’s appearance. X-braced, roll-bar appearance features highlight a terraced rear bed area while stylish number and name plates finish off the body giving it that authentic short course look. 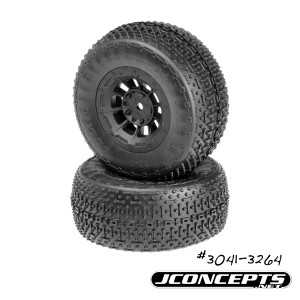 After numerous requests JConcepts has hit the easy button once again and is now offering its most popular SCT tires pre-mounted on the new +3mm Hazard wheel. The Hazard wheel pre-mount combination fits a variety of vehicles including the SC10 RS, SC10 4×4 as a direct fit and SC10 FT, Losi XXX-SCT and SCB with 12mm hex adaptors.

With JConcepts it is simple, choose your favorite option and you’re ready to roll.