Race vehicles are considered by many to be at the front of technology. Their designs, features and geometry are constantly in a state of evolution with the goal to give racers the tiny advantage they need to get to the winner’s circle. One of those engineers that strives to improve those vehicles is Kurt “Coach” Wenger. Having worked on successful vehicles like the original Team Associated B4 platform, Kurt has now moved on and founded his own tuning company, Schelle Racing Innovations, to help fill a niche in the industry by providing products for vehicles to maximize on-track performance. We got a chance to sit down with this iconic figure and pick his brain about the hottest upgrades, and the future of vehicle design. 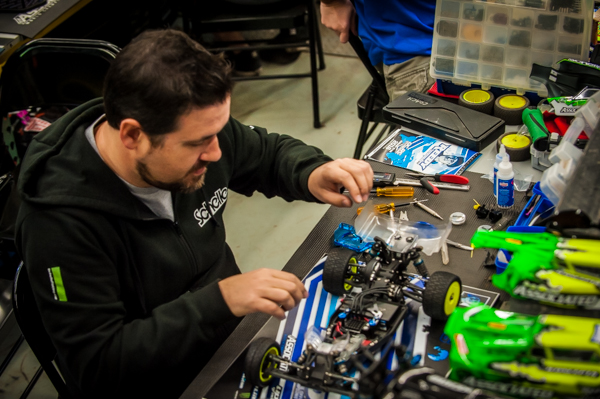 Kurt Wenger in the pits at the recent 2016 Reedy race of Champions.

RC Car Action: So Kurt, you’ve been doing this for a long time. What do you think has been the biggest change in design theory in the last few years?

Kurt: The biggest change that I’ve seen recently in electric off-road racing is the transition toward the mid-motor chassis configuration. Getting all the weight toward the center. The tracks we race on now and the tires, have enough grip so that you don’t need to have as much weight on the rear tires and still have the car handle. Inevitably, that is what everyone was trying to do with rear-motor designs. You want to get the components as close as possible, but we were trying to do it with rear-motor cars and once everyone figured out how to make the car work without as much weight on the rear tires, including the advent of the shorty LiPo batteries- another reason why mid-motor works better now- is being able to make the car light with lower overall mass and still have traction. I feel like they go hand in hand- the shorty batteries and mid-motor. Getting all that figured out has been the biggest thing.

RCCA: Do you think that trend is going to continue?

Kurt: I feel like we’ve reached a point, but people are still trying to figure out how much weight they need over the back tires to have traction and they are continuing to push the envelope. The next transition is changing the track surface. As soon as you jump from something like dirt to carpet and Astro-turf, that magic formula changes again. We’ve seen it at the IFMAR Worlds in Japan at Yatabe, and the EOS Series. There’s kind of a new magic formula. Everyone used the term, “laydown transmission,” which is basically pushing the weight of the motor farther away from the rear axle and putting even less weight over the rear tires. On carpet you’re not dealing with tires not having enough grip. They aren’t going to slip, so people have learned how much of an advantage it makes.

RCCA: Do you see any other trends that seem to be progressing even further? Do you think nitro vehicles will follow this same pattern?

Kurt: Yeah, nitro is also figuring it out with everyone running their buggies with lighter weight. That’s been a huge thing and the other big thing I’ve seen in nitro is that people are running at qualifying pace in the mains. Before they had a main event tire and a qualifying tire, but now people are able to run their tires with low pin and be able to run them for an entire main event. It’s really pushing the pace in nitro. To win a main event, you have to run at qualifying pace for the entire race. That’s the biggest difference I’ve seen. It’s made it really hard for everyone to do that.

RCCA: So it’s really a response to the tracks and tires and the traction we are dealing with now?

Kurt: That’s what I feel like… and the level of competition. Like the NEO buggy race last year was a perfect example. The race was won on AKA “Typo” (model) type tires- the smallest pin tire that you thought you could never run for an hour indoors- but now it’s to the point that there’s enough good drivers that if you don’t go out on mini pin tires and go for it and make the whole race on them, someone else will. It’s been done enough times to prove that it can be done for a whole hour and make it, so now all the pros are doing it. No body is using tires like “Bowties” anymore.

RCCA: The driving style has kind of forced the hand?

Kurt: Yeah, you have to push all the time. It’s so competitive. There are people who can push at qualifying pace for the whole hour, and once people learned it and started doing it, it become something you just have to do now.

RCCA: What kind of products are you making now that are in response to these trends?

Kurt: I feel like my core design is about improving on existing products. When we look at a part, we try to improve performance, durability and ease of maintenance. It’s about looking at the essence of the design, how they fit together. If you look at the B5M, and the rear suspension design, we made rear pull hingepins so that you don’t have to take apart the back of the car to work on it. It’s something common when you are changing something like anti-squat. That’s a lot more of where our focus is. To take something new like the TLR 22 3.0 and build it and think “I don’t like the way these pieces fit together,” so we made a new rear inner camber mount that fits in to the tower and made the assembly design a different way. We were able to make a design feature with vertical ball studs and washers that everyone likes to use and make a more durable part in a more compact package. It’s little things like that we look at. The other thing I noticed was that modified buggy racing has died down and everyone loves racing 17.5/stock. So we are making our slipper clutch line-up with an update to the drive plates. We also have a full blown lockout set for stock with lightweight parts that use our proprietary Nova spur gears. The popularity of 17.5 is really where it’s at and where the paying customers are. So we try to put more focus in to that. In electric off-road racing, the stock class has gotten really fast. It’s no longer the class where you think, “oh no, my car is painfully slow. I need to move up to mod.” Stock is fast enough for the average person and most people aren’t going to go faster with a mod motor. The modified motors are insane now and this makes people content to race stock. It’s fun, it’s fast and that’s what they want to keep running, so we are trying to make more products geared specifically toward them. 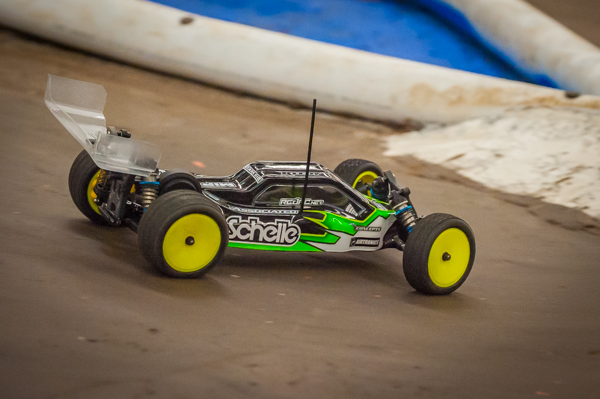