Before mains started, IFMAR officials held a meeting to address the tire controversy at the IFMAR 1/8-scale on-road world championship being held in Homestead, Florida. While no traction-adding tire treatments or “sauce” are allowed and tires are now being impounded, a sponsored competitor was found attempting to cheat at some point after the issue was initially addressed. Originally and before a tire impound had been put in place, a formal protest was issued regarding a more wide spread use of tire treatment. IFMAR’s impound area and rules put in place prevented the suspect tires from being used and IFMAR issued what is essentially a reprimand to the group of professional-level drivers in attendance. See the note issued below:

It is very sad to see that tire treatment is available, even here on the track by drivers who know on forehand that it could not be used.

They have gambled and hoped that it would be allowed due to the none availability of detecting equipment.

It is even sadder that this small group of drivers is responsible for the delays that now have occurred.

In the past a small group of drivers was also the reason we had to make a decision on the use of controlled fuel, because drivers were cheating.

Now this group might be responsible for the introduction of a controlled tire in the future.

An IFMAR World Championship has 150 till 180 drivers. The majority of them being an amateur, who has to pay 4000 till 5000 USD to run in such an event. Without them there is no World Championship. This small group of so called professional drivers should realize this. 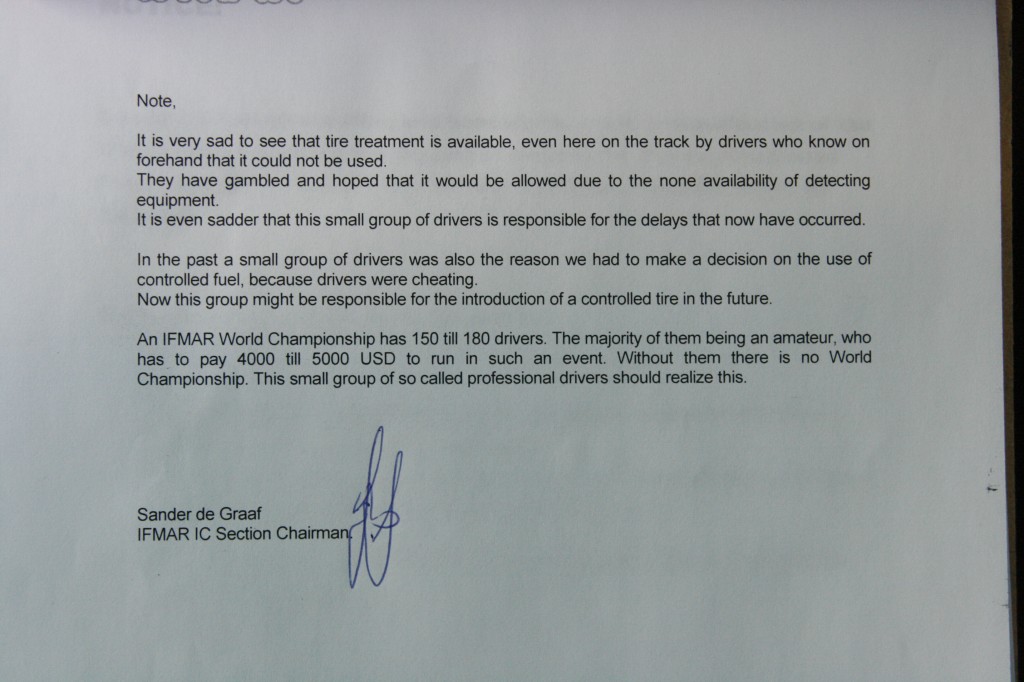