Team Orion would like to Welcome Ellis Stafford, adding to the very strong team of factory drivers around the globe.

Ellis Made his debut at the first UK buggy national at Sunny Stotfold.

In 4wd Ellis was going into last round of qualifying confident to make TQ with his Team Orion Powered Lazer. With one corner to go Ellis had 1.5 second advantage over the current double European champion Lee Martin. Unfortunately a roll on the last corner cost him the overall TQ.

Starting 2nd on the Grid the qualifying pace suggested it would be straight race between Lee and Ellis. A clean start in leg1 by the front 2 but a big wheelie and mistake by Simon moss in 3rd meant that Lee and Ellis was in a race on their own for the whole of Leg 1, Ellis making 2 or 3 small mistakes cost him and meant that lee took the first leg.

In Leg 3 Once again it was Lee and Ellis with some great close racing and some swapping of positions, however after 2 minutes a worrying noise started from Ellis car, even so Ellis made a crucial pass which gave him the lead he needed, however it was short lived as his rear gearbox failed ending his race.

The Day ended with Lee Martin taking 1st and Ellis 2nd overall. A disappointing end but Ellis was happy with the smooth and powerful delivery of the Team Orion combination. 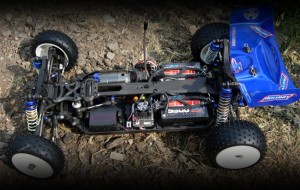