Team Associated was well represented all weekend by AE/Reedy/LRP driver Mike Gay, as well as AE/Reedy driver Andy Castellini, and one of AE’s newest and youngest drivers Gunnar Rieck.

The track started out sandy and slick in practice, with the track recently hit hard by Hurricane Irene, but with a lot of help from the track crew, it quickly turned into high bite and blue grooved mid-way through Saturday, and continued to get faster throughout the weekend.

Mike Gay held the TQ position in 2wd Mod Buggy after some very close qualifying with his Reedy/LRP powered FT B4.1. In the A-amain, Mike never lost the lead and drove a seamless race to win the 10 minute main by 15 seconds. Using Ryan Cavalieri’s IFMAR Worlds winning setup made the car extremely consistent and easy to drive as the bite continued to increase.

Gunnar Rieck’s FT B44.1 secured the pole position in 4wd mod buggy, with Mike starting 2nd, one second behind. Gunnar took advantage of his TQ by pulling a quick lead after the first few laps. After Mike’s rough start he battled back to the front runners, putting down the fastest laps of the weekend to take over the lead and the win, with Gunnar finishing 2nd to put their FT B44.1’s on the top 2 steps of the podium.

Andy Castellini represented AE well in 2wd mod short course with his Reedy powered FT SC10 truck, respectably qualifying 2nd , but forced to retire early while in the lead in the A-main of this very popular class. Similarly in 4wd short course, Andy and Mike had good showings with the new SC10 4×4. Mike put his 4×4 in the TQ position to start the main, and throughout most of the race Andy and Mike ran in the 2nd and 3rd spots. Unfortunately Andy went out of the race with one lap to go, giving Mike the 2nd finishing spot with Andy finishing third.

Electric 1:8 buggy had a host of talented drivers from the mid-atlantic area, but qualifying was totally dominated by Andy’s Reedy e-powered converted RC8.2, giving him the TQ position. The pole position proved to be a huge advantage at the start of the main as he checked out on the field from the 2nd turn of the race, as the field piled up in his rear view mirror. He went on to put away the 10 minute race by nearly lapping the field.

Nitro truggy was a tight and fast class which saw Gunnar put his RC8T WCE truggy in the 2nd qualifying position. Gunnar held the 2nd spot throughout the race, although unfortunately a pit stop flame out cost him some time to the leader, he was still putting down some of the fastest laps in this class. At age 14 he’s already got the speed to hang with seasoned racers, in the coming years his name will surely be on top.

Nitro buggy had the largest turnout of the weekend, and is the most popular class of off road racing throughout the warm months in this area. Andy Castellini took TQ with his #800 Reedy 121VR powered RC8.2, with Mike and Gunnar starting a close 2nd and 3rd. After the first lap of the main, it was clear that the new RC8.2 is dialed in the blue groove conditions, as Andy, Mike and Gunnar pulled a quick gap on the field. After a few minutes of swapping the top 3 positions, Mike took the lead with his Reedy #800 121VR powered RC8.2 and never looked back, taking the main by over a half a lap after 20 minutes of under-the-lights night racing. Gunnar battled for the 2nd position much of the race, and ended up on the podium in the 3rd position. The new revisions to the RC8 platform make the car much more forgiving in all conditions, as this car is proving to be the front runner on any track from blown-out to blue grooved.

Family Hobbies held the 1st ROAR Offroad Nationals in 1984, and 27 years later AE/Reedy are still winning at this track in the electric and nitro classes. 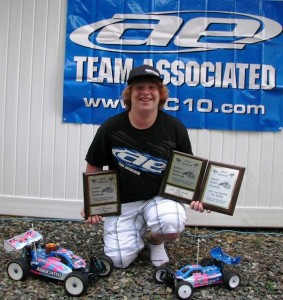 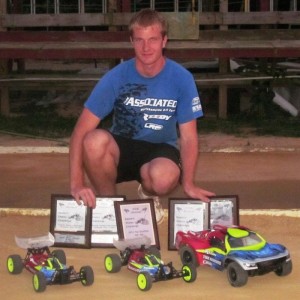