My new HPI Cup Racer came with a cool Toyota Corolla Levin body, but there was one problem: I had no idea how I wanted to paint it.  I browsed hundreds of Levin and Trueno photos but nothing really inspired me.  Then, by random chance, I was flipping through my old copies of RC Car Action magazine and came across Kevin Jowett’s Rock Pile column in the April 2011 issue.  In the writeup, Kevin describes how to salvage an old beat up truck body, repaint it, and give it a cool aged and rusted finish.  This concept immediately clicked in my brain, and I set out to make my brand new Levin look…  well, terrible. 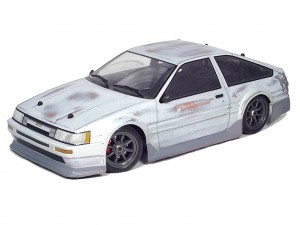 I wanted to make a classic beater: A car with good bones that’s seen a lot of miles but still has plenty of fight left in it.  I also wanted it to seem like it was owned by someone that loves cars but is maybe a bit short on cash.  My first step was to add a few scale-accurate dings and dents.  I used a butane soldering iron with a heat gun tip and gently heated the areas of the Lexan I wanted to dent.  Once the plastic was hot (but not melted!), I just poked or scratched it with a random tool to make a convincing dent that looks just like what you’d see in a metal panel. 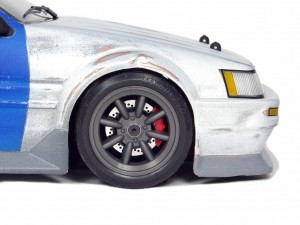 When I was done fender-bendering my poor car, I prepped it for paint as usual.  I painted the inside of the whole shell basic silver and backed it with black; this gives the look of bare sheet metal for spots where the paint is worn completely through.  My next step was to paint the outside of the car, which meant I needed to mask out the outsides of the windows.  Instead of using masking tape, I just carefully cut the overspray film around the windows using an X-Acto knife and peeled off the excess – it worked great.  I then laid down a layer of copper paint, which looks like rust when revealed through the paint layers, followed by some primer gray.  I masked out the Levin’s body kit so that it would retain the primer color, like so many tuner cars I see on the roads here in California, and then finally topped everything off with a layer of pearl white. 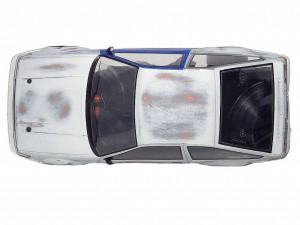 Now the fun part.  I got out some extra fine grit sandpaper and a scuff pad and went to work aging the car.  The sandpaper helps wear away the paint and gives it a nice chalky, oxidized look while the scuff pad helps blend everything together smoothly.  I attacked the roof and the hood first, both of which are areas that tend to get a lot of weather damage on full-size cars.  In some places I sanded down the primer layer, but in others I let a bit of the “rust” show through.  I also scratched through and scuffed the paint around the many dents and dings I gave the car earlier, and just like that I was done….  Oh, wait!  No beater can be complete without a differently-colored body panel, so I ran back out to the paint booth and gave the Levin a wonderful (and yet horrible) blue door.  Perfect. 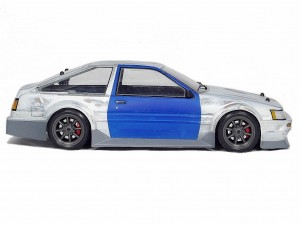 Almost complete – only a few finishing touches to go.  I added decals all around, but they were very shiny and looked strange on the old-looking paint.  I carefully went back over every decal and scuffed them with my scrub pad to take off the gloss, and that did the trick.  Next time I do this I’ll scuff the entire sticker sheet first before applying.  I then mounted the wipers, mirrors, license plate, tailpipe, and light buckets, but it still needed one final touch.  At RCX this year I spotted a scale rig on the rock crawling course with a very cool windshield wiper effect, so I set out to replicate it.  A bit of experimenting and a scrap of sandpaper later and it was done: a dirty, smeared windshield and rear window. 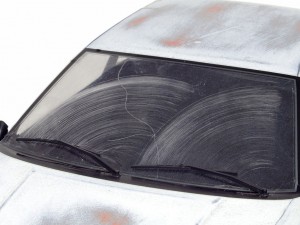 My Toyota Corolla Levin beater is finally complete, and I’m very happy with the final result.  This was my first official “aged look” paint job, and I can say for sure I will be doing this again soon.  The best part about this car is that the more I use it and bang it up, the better it will look.  Those pretty boys down at the drift track had better watch their rear quarter panels. 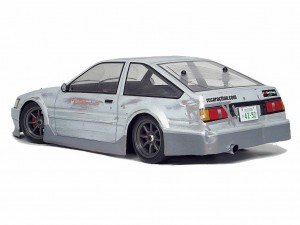