As the calendar year comes to a close, the winter indoor racing season kicks off. The Spektrum Off-Road Challenge, hosted by Trackside Hobbies in Brookfield, WI is becoming on of the largest indoor races in the country. Racing got underway with over 300 entries for this three-day event. Friday’s schedule allowed drivers to get on the track for practice, followed by one round of qualifying to end the day. Saturday would decide starting grids with three rounds of qualifying, followed by mains on Sunday. With cold temperatures outside, it didn’t take long for the racing to warm up on the track. The three premier classes this weekend were 2wd Modified buggy, 4wd Modified buggy and Modified Short Course. JConcepts driver Chad Due was on hand, to show that he was ready to take on Losi and Associated’s top drivers.

After four close rounds of qualifying in the Modified Short Course class, Losi’s Dustin Evans was able to hold off Chad Due and Ryan Cavalieri to take the Top Qualifying position. Due and Cavalieri would pressure Evans from their 2nd & 3rd place starting spots for the first couple of minutes of the race. A mistake by Evans would cause him to have to park his truck, and watch the battle between the Associated teammates. Cavalieri matched Due move for move and was never more than a second from the back bumper of Due’s SC10. With Due’s nerves of steel and a slight bobble by Cavalieri late in the race, Due was able to cruise home to take the win in the Modified SCT class. Crossing the finish line to the cheers of his local track fans, Due was able to take a victory lap for the first race of the indoor season. Due used JConcepts Barcodes all weekend long to take the victory. Due stated after the race that the Barcodes had great traction and wear all weekend long.

Chad Due would also find himself on the podium, for both 2wd and 4wd buggy. With third place finishes in both classes, Due and Cavalieri were the only drivers to make the podium in the three largest Modified classes. Due was again used JConcepts Barcodes on his 2wd and 4wd buggies.

Thanks to Trackside hobbies for hosting a great event. The track layout was great, and most drivers left the track knowing they would be back for the 2011 Spektrum Off-Road Challenge. 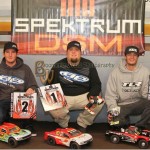 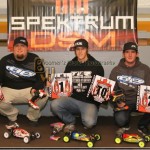 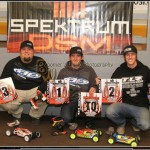