It was Team Associated’s day to shine today at the ’11 ROAR Offroad Fuel Nationals.  With Ryan Maifield claiming his third ROAR Truggy National title today and Ryan Cavalieri taking home his second ROAR Buggy National title (only the second racer ever to do so, after TLR’s Adam Drake), the AE team had plenty to celebrate.

The TQ “curse” struck once again in both classes, as Kyosho’s Jared Tebo fought hard and led both the truggy and buggy mains only to have his hopes for a double ROAR win dashed by sterling performances from AE’s Maifield and Cavalieri.  In truggy, Tebo made one too many mistakes, allowing Ryan Maifield to claim a decisive victory with Tebo finishing second and Hot Bodies’ Jesse Robbers finishing third. 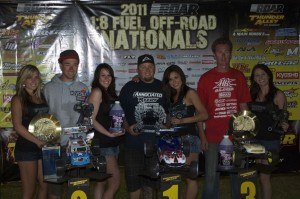 Buggy was a different story; early on, Tebo, Cavalieri and Maifield broke away from the pack.  Cavalieri and Tebo traded the lead numerous times until Tebo’s buggy was carried off the track due to a loose steering servo horn.  Tebo’s exit allowed Cavalieri to run away from the group, leaving Maifield, Kyosho’s Cody King, and Losi’s Dakotah Phend to fight for the remaining 2 podium positions.  At the end of the 60-minute final, it was AE’s Ryan Cavalieri and Maifield claiming the top 2 positions, with TLR’s Phend (already a ROAR National champion in the stock electric offroad class) finishing third. 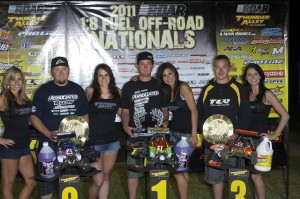