With such a jam packed busy schedule, IFMAR planned an off day that would allow racers to transition from 2wd to 4wd. Looking around the pits and you either see one of two things, racers building brand new kits, while others are putting those last minute touches on their rigs for the following day. Right out of the gate I noticed one very important thing, the track was covered. The organizers did this for two reasons. One, it had rained a bit the night before and was drizzling throughout the day and since there was no racing or practice planned it was kept covered to protect it. Second, lying underneath was a new layout for 4wd. That’s right, The crafty Fin’s managed to create a track design that’s completely interchangeable. See, over here in europe, when a track is put in the layout hardly changes for years. There will be areas to change minor details to mix it up once in a while but for the most part it’s damn near permeant. In the USA, most tracks change there entire layout every 6-12 months, at least in SoCal they do. I gotta say though, the revised layout is very interesting and completely suits the 4wd class of cars. This should make for some highly competitive racing. 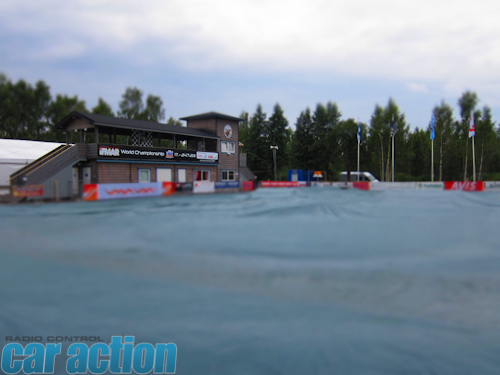