X Factory showed off its new 4WD car for the first time at the recently completed Cactus Classic. As usual, the testing was done in public but without fanfare, so few people realized what they saw.

These photos show the prototype X – 7 with a J Concepts body made for the B44. The production car will have its own body – this one works for now.

“I’m so excited about this car,” said Chief Engineer Paul Sinclair. “We don’t work outside the box because we have no box. The X – 7 is absolutely revolutionary. You have never seen a driveline like this, you have never seen adjustability this easy or quick. Working on the car is very easy; I can pull a diff, rebuild it, and have the car ready to run in 10 minutes.”

Clayton Easley, who drove the car in 13.5 at Cactus, said “The platform is definitely there. We have a long way to go, and we’ll have the details worked out in a few months.”

These photos show the car at Cactus. The blue body was used in practice, and Clayton and Paul’s own bodies arrived on Friday for qualifying.

Paul added, “We’re working very hard on this project. We will make almost everything on the car – it will be a complete Kit, not a Conversion. This is the first time I’ve actually designed everything on car from the ground up. There is a long way to go, lots of testing and development. Ellis Stafford will have my original race prototype sometime next week. We hope to have it on the market late this year or spring of 2012.” 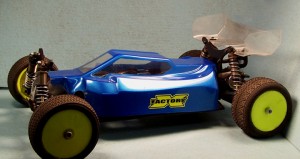