The 27th annual CRCRC Winter Midwest Championships presented by JConcepts kicks off the new year for the racing season. New cars, new packages, and a new resume start here. With a huge amount of drivers, and talent, this years Winter Champs climbed to 466 total entries. With practice wrapping up, the program was for 2 rounds of qualifying on Friday. Following a re-sort 2 more rounds on Saturday followed by mains on Sunday with triple A’s for all classes.

First up was 2Wheel mod. After 122 Mod Buggy’s finished off their first heat, AE – JConcepts Ryan Maifield sat on top with the TQ for round 1. Going farther into the rounds of qualifying Ryan continued with his winning ways taking the newly released Dirt Webs in Gold compound to the front of the field round after round. Maifield clinched every round of qualifying to claim P1 for the main event. Fellow AE – JConcepts driver Tanner Denney with his debut at the Winter Champs showing his liking of the new Dirt Webs with 2 strong 3’s for the rounds to get him towards the front of the grid. JConcepts filled out the field with Brando Marsh on Bar Codes, Brent Thielke, Nick Gibson, Mitchel Gardner, on Dirt Webs and bumping up from the B main, Paul Sinclair, with Dustin Richards on Bar Codes. 8 of the 12 drivers rely on JConcepts Gold compound for the traction and speed to make it to the front of the huge field.

4Wheel Mod with another field stacked with talent. After the first 3 rounds of qualifying, three different drivers each had a TQ round. It would be down to the 4th and final round to determine the starting grid for Sunday. Ryan Maifield showed the consistency to get his second TQ to lock up P1. His 2nd, 3rd, and 4th round of the 4Wheel class were all 14 laps at 5:15. Joining Ryan in the A main were team drivers Mitchel Gardner, Brandon Marsh, Aydin Horne, Max Flurer, Tanner Denney, and Alan Horne. Once again the new Dirt Webs, and Bar Codes being the class of the field.

2Wheel SCT once again had Ryan Maifield with the secured TQ after winning all of the qualifying rounds using Pressure Points in Gold compound on his SC10.2.

Sunday started with the remaining main events as drivers had the last chance to bump up into the next main. After a long day of racing, it was finally down to the end. The 2Wheel Mod class took to the track, and using his first spot on the grid Maifield checked out to a huge lead to take the A1 win.
A2 was more of the same, with a comfortable margin Ryan held off all challengers matching lap times at will to take the overall Championship. In A3, Tanner Denney starting for the 4th spot took command of the final and the win. Dirt Webs won every single round of 2Wheel Buggy racing.

4Wheel had Ryan with the front spot, and used it to his advantage with a run a way victory in A1 followed by JC’s Mitchel Gardner with a great finish . The next main had Maifield in the lead, but finally a mistake by the driver sent him back to 3rd. Charging back to the front with time running out, contact with team mate Cavalieri resulted in him sportingly waiting for the driver allowing Jared Tebo to collect the victory. A3 would be the final factor and while the lead changed a few time, in the end it was Maifield with his second class Championship of the day.

With the 2Wheel SCT front spot on the grid. Maifield wasted no time to get away from the field and claim the victory in A1, and A2 for a sweep of the classes entered by the Arizona driver.

Not to be outdone, Matt Olson starting from 2nd on the grid wanted a share of the top step of 4Wheel SCT. Gaining the lead at the half way point, Olson took his MIP 4Wheel to the victory in A1. A2 had more of a battle as the lead 3 drivers swapped the lead several times. At the end Olson got the spot and never let it go. JC’s Alec Walters took 2nd in 2 main events to claim the final podium step. Both drivers using Gold Pressure Points.

A special thanks to Curt Schlichter of the Ohio RC Factory for another great event. The CRCRC club for an amazing 27th annual race. Also the 466 entries that make this a must attend event to kick off the new year. 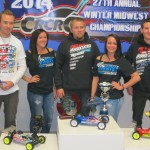 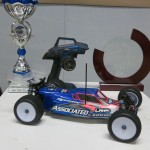 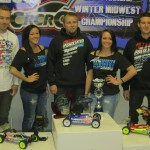 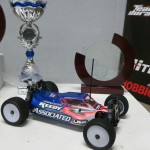 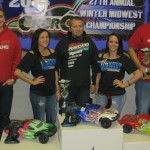 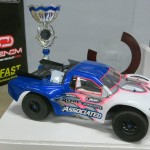 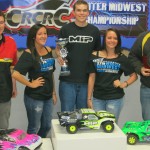 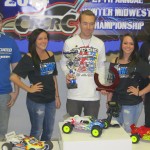 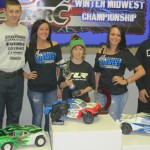