Ok so I’m putting off the extra details I promised about the new products until tomorrow.  It’s getting late but I thought, hey how about another update before we call it a night.

Everyone has started to take notice of the new JC items.  Even the “cool” guys that act like they don’t care were right next to the track watching today.  It’s funny when guys that are on the same chassis team are still trying to psych out each other in the pits.  Got to love the competitive nature in an individual sport.

Buggies hit the grooved track and they were flying.   Why does every track seem so hard now?  Maybe when you’re not racing it looks harder than it is? No doubt, it’s hard!

It’s tough to see from the photos but I would say the back off the track is 20 feet higher in elevation than at the base of the drivers stand.  This is really how all tracks should be in my opinion.   They have a completely banked double apex turn at the back section of the track, that is so cool.  The racers are loving this track right now it seems.

There are a couple of sections that are going to be rough.

1.  Downsides of jumps right on the turn coming on the straightaway?  Don’t turn the wheels too much in the air!

2.  30 foot jump in the center of the track.  Watch out for the guys that want to drag race through the jumps!

3.  Middle of the track back double jump.  Guys are calling this the seat bounce jump because you can’t always clear it right and end up casing or bumpering the face.

The day really extended today.  We left the track and packed up at about 9:00pm.  They were using control practice based on qualifiers today and it worked out pretty well.  Some drivers were complaining because not all drivers were running the heats and they looked at it as missed track time opportunity for other drivers.  They started a secondary line for drivers and if racers were missing from a heat  they would bump an in line driver.   This seemed to work pretty well and got everyone a few more runs. 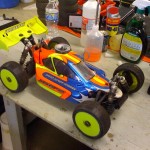 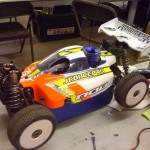