JConcepts made the trip to the resort town of Myrtle Beach, South Carolina for the 10th annual Fall Brawl at the Badlands R/C Raceway.   Promoted as the “Original” Fall Brawl, this year’s version on December 2-4, had nice weather that has eluded them for the past few years.  At the drivers meeting, special recongnition was given to Kevin Bullock, the front man of the club, for his years of being in the fore front of helping make Badlands one of the nicest, and demanding race facilities on the East Coast.

The format for this race was going to be Friday pratice, with Saturday qualifiers, followed by the mains on Sunday. Friday was a nice day, with the temps in the mid 60’s, and sunny. Drivers had the chance to get some laps in, with the changing conditions from morning, to sunny afternoon, to chilly evening, and try to get tires figured out for the next days event.  With a swing in the temperatures on average of 25 degrees per day,  the track had its moments of being in its peak condition.  With Qual-Points being used, it was all about placement in your class, and not about fastest overall time.

Saturday started off very chilly, and never really got to a warm point throughout the day.  As 234 entries, comprised the 22 heat races, things got underway, to a chilly, windy morning and somewhat slick track condition. As the day wore on, the sun got a little bit of heat into the surface, but the windy cold temeratures never allowed the traction to come up, like it was the day before.  Still, after the many laps that were run, traction was good in the evening races, after the sun had set a few hours before hand.

Sunday began a little warmer, as the mains started at 8am, with the drivers trying to bump their way into the A, to join the drivers who were already seeded in the show. The electric classes were using the double A format, to determin the winner, and nitro would be set with a 30 minute A main.

Getting into the A’s, the track was at its best as far as traction was concerned, with the temperature in the mid 60’s. The first of the electric A’s would start off with JConcepts driver Max Fluerer taking the win in Pro 2 using the new Pressure Points tire on his SC10.  He would then back that up with a win in Pro 4, this time using Bar Codes to take the top spot from JConcepts / AE’s, Brandon Melton (TQ), both running the SC10 4×4.  Max then used little time to take the lead in E-Buggy from fellow AE driver, and TQ Chris Pace. The two battled back and forth, exchanging the lead between them, in the end Max took control to win the main, using Sevens, in Blue compound.

In the nitro mains, Starting in 2nd on the grid was Brandon Melton, after TQing the 3rd round of qualifying using 3D’s in Green.   For the main, Brandon equipped his RC8.2 with Bar Codes.   In the race, Brandon was keeping his sights on TQ Adam Drake, but an untimely crash on his in-lap had him flame out, dropping him down the order and out of contention.   As the race wore on, JConcpets driver Jason Smith moved his way into 3rd, as Brandon had fought his way back to 5th, only to drop out with a few minutes remaining.  Team driver Tim Smith worked his way from the bump up spot to finish 7th, running Hybrids in Blue compound.   JConcepts tires were used on 6 of the 13 cars in the A.

The Truggy main had the field chasing the TQ, Adam Drake. With time expiring, JConcepts Jason Smith was in the 2nd spot using Hybrids, also Josh Hollifield worked his way into 5th, Pete Worth in 6th, and John McGinty having a rough run, finished 11th.

In the 2nd A-main of the electric finals, Max Fluerer, using the same set of Pressure Points from the first main, took the lead from John Piant on lap three, and held on for the win, taking the title with a win in both of the mains.

In Pro 4 SCT Brandon Melton and Max Fluerer using their JConcepts equipped SC10 4×4, checked out from the field, and began a battle. Changing positions many times, and never getting far from each other they maintained a comfortable gap on 3rd place, the battle never let up, with Max taking the win at the line, with Brandon less than a second behind at the end of ten minutes.

In the E-buggy class, with the temperature dropping, Max opted for 3D’s in Green compound.   Max had built up a comfortable lead, and was laying down the fastest laps of the weekend, taking his 3rd class win of the day.

Once again we would like to thank Kevin Bullock and the entire Badlands R/C facility on a successful 10th annual event. 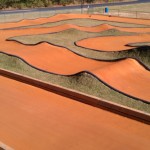 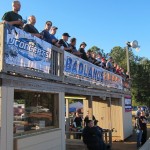 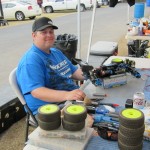 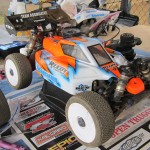 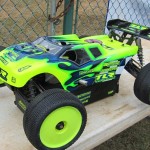 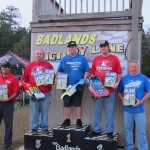 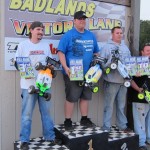 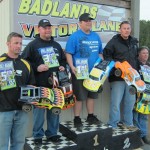 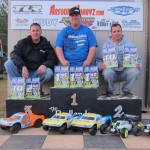 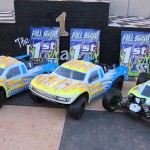