TLR and JConcepts driver’s Frank Root and Ryan Dunford, along with Associated Driver Steven Hartson, were on hand at the 3rd round of the TLR Series Sunday at Orange Country R/C Raceway (OCRC). The track had fantastic traction and a very fast layout. The entry count was very strong at 121 and a great day of racing was had by all.

2wd Modified Buggy – There were 2 heats of modified buggy and the qualifying action was intense. Steven Hartson had a good run in the first round taking the early TQ. Frank and Steven would then battle it out in the second round for going back and forth both on TQ runs with Steven pulling out a little at the end and taking the TQ point. When the tone went off, Hartson jumped out to a quick start with Root right in tow, but a small bobble front Frank would drop him back to 5th. Steven would build up a nice cushion, but Frank quickly moved back into second and put together a very strong string of laps to close back in on Hartson. A small bobble allowed Frank into the lead, but Steven would make a great pass off the straight as the 2 drivers went side by side through 2 turns, and take back the lead. The 2 JConcepts drivers would then have an intense wheel to wheel battle for the next 3 laps, but Frank was unable to make a move past Steven, and finished in 2nd 0.6 seconds behind Steven. The 2nd place finish by Root, allowed him to lock up the overall point championship in 2wd Mod Buggy, with Tamiya/JC driver Jake Thayer finishing in 2nd! All three drivers ran JConcepts Gold Bar Codes front and rear, with JC closed cell inserts in the rear for maximum traction. Frank even ran the same set the entire series, showing that speed and longevity do coexist and will win-out with JC Gold Tires!

Pro4 (Modified SC) – Frank and Steven were again setup for an epic battle in the Pro4 class. Steven would take a narrow round 1 TQ by 0.4 second over Frank. Frank would charge back in the second round setting the fastest time, but falling just short of the round 1 times. Steven would start on the pole, with Frank in 2nd and Ryan in 4th. Steven and Frank would quickly pull away from the field and begin to battle it out for the top spot. A bobble by Steven allowed Frank into the lead, and his Losi Ten-SCTE would put together a great string of laps including the fastest laps on the 6 week old layout on his way to the win. Steven would finish a very strong 2nd, and Ryan Dunford wrapped up the overall championship in Pro4 with a strong 4th place finish!

Gold SC Bar Codes went undefeated taking the win in all 4 rounds and the overall championship in 2wd Mod Buggy and Pro4 – 8 for 8 and 2 for 2!

JConcepts would also like to congratulate privateer Matt Pages for a very strong showing in his first racing series, winning both the stock buggy and stock truck classes with JConcepts Gold Bar Codes front and rear on his TLR 22 and 22T. 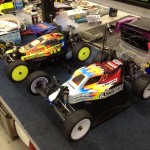 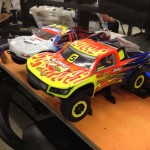 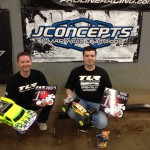 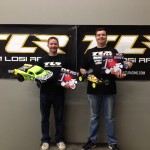 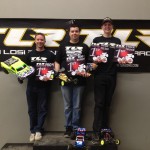