The 26th annual Arizona State Championships presented by JConcepts was held at the World famous SRS Speedway in Scottsdale, Arizona. With a new challenging track layout, drivers were scrambling to get things figured out, as the track didn’t have the traction that some of the drivers were expecting.

Perfect weather greeted racers as Saturday’s qualifiers got under way. One hundred and Seventy Five entries made up the 23 heats of racing. Three rounds were run on Saturday, at the direction of race announcer Richard Lake. Sunday started with one more round of qualifiers, then it was on to the mains.

JConcepts tires were in control, with many of the Modified drivers running JConcepts Bar Codes in Blue compound, some of the stock drivers were going to the Green compound. 2wd Modified Buggy was setup for tripe A-main events. In the first A-main, Top Qualifier Ryan Maifield led the parade and got a comfortable lead taking the easy win. With heavy racing back in the field it was easy to go from the 2-3 spot, back to 5-7 by having one mistake so racing action was intense. As A-2 started Ryan made a mistake, and was back in third, one more mistake had him back in 5th but it was impossible to count out Ryan completely from A-2. Billy Fischer was out front and Ryan started mounting a charge towards the front, laying down the fastest lap times of the day. Finally back in the second spot, Ryan was inching up on Fischer. Billy made a mistake, and Ryan was back in the lead. At the tone, it was Maifield who took the win and the title with wins in the first two A’s. Brian Kinwald won the third A, and Billy Fischer finished third overall.

In Modified Truck, it was Top Qualifier Ryan Maifield with a wire to wire run, to take the win. Brian Kinwald took the number two spot, both using JConcepts Bar Codes in Blue compound, and JConcepts Punisher bodies on their T4.1 trucks.

Short Course Modified was again, a Ryan Maifield win, with a dominating run for the extended length A-main. With a hard fought battle, Tanner Denney worked his way from his 2nd spot at the start, to fall back, and put his head down to regain his spot on the podium in 3rd. Ryan and Tanner were both using the new JConcepts Hi-Flow body, Hazard wheels and JConcepts tires in blue compound.

SCT 4×4 was all Billy Fischer in qualifying. As the mains begun, Brian Kinwald had found another gear, and was keeping Billy in his sights, putting pressure on him at times. Billy made a mistake, and Brian was in the lead for the first time of the main. On the next lap, a mistake by Brian gave it right back to Billy. As time expired, it was a one lap dash for the win, with both drivers inches apart. Entering the last turn, Brian stuck it on the inside, but brushed the pipe, bouncing him into Fischer, ruining Brian’s momentum, as Billy drove to the win, followed closely by Kinwald. Both drivers choose JConcepts Bar Codes to grip the Arizona dirt.

4wd Modified had the Top Qualifier Billy Fischer trying to catch his breath after running the SCT. Unfazed, Billy jumped out at the start trying to get a gap. A battle between Jake Thayer, and Brent Fiege kept pushing towards Fischer. Fiege putting pressure on Fischer, but a mistake would drop him back, and that is how it would finish, with Billy Fischer taking his second title of the day, and Jake Thayer finding the podium, in third. 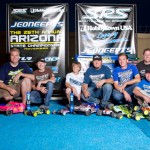 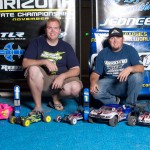 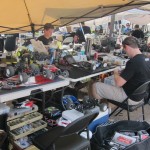 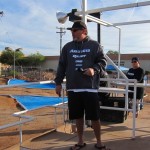 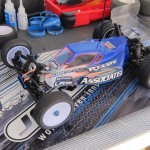 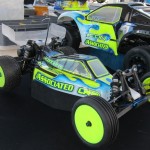 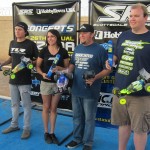 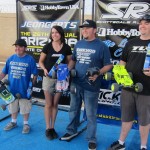 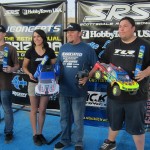 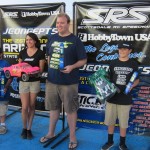 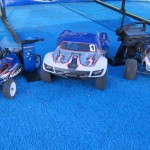 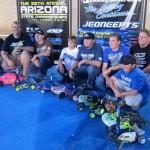