A four strong JConcepts team from Melbourne headed across the Bass Straight from the mainland to the small island of Tasmania to take on the local talent, the Victorian team consisted of veteran drivers Ashley Peeler and Leigh Cheeseman along with JConcepts newest recruits Andrew Selvaggi and John Watkins.

Competitors headed to the picturesque town of Goodwood, Tasmania, located North West of Hobart on the south east coast of Tasmania. The crew at GOMCC (Goodwood Off-road Model car club) had laid out an extremely high speed, flowing track that was to provide grip in bucket loads all weekend. GOMCC President, Alex John and all the awesome track crew had taken all their favourite parts for various tracks around Australia and combined them together to produce a top class track. The track surface was made up of fine red clay with a moderate sand content; the surface was sugared in the lead up to the event to ensure a consistent level of traction all weekend long. Temperatures for the weekend ranged from a low of 14 degrees Celsius on Friday morning to a high of 34 degrees in the late afternoons. The temperatures were 10-15 degrees above average for this time of year.

This was the first ever AARCMCC Tasmanian state titles hosted on their small island. Modified results would count towards 2015 IFMAR 1/10 EP world rankings points for drivers. The control tyre for this event was the AKA rebar in super soft compound in all classes with the exception of stadium truck where the tyre selection was open.

2wd Modified qualifying was close with Ashley Peeler in his RB6 and Leigh Cheeseman in his TLR22 trading blows. With Ashley getting the TQ honours.

In the Finals Peeler wheeled his Savox powered RB6 to victory after A2, Peeler decided to run A3 to get some additional wheel time in preparation for Sunday, teammates Andrew Selvaggi and Leigh Cheeseman along with local gun Ben Hoare fought to the death in the last final to decide the remaining podium positions with Andrew Selvaggi coming home strong to get the 2nd spot on the podium in front of Ben in Third.

Stadium truck was to be run for the first time officially in 2013 under New AARCMCC rules of 10.5t Blinky “stock “Class. The format change to the class levelled the playing field somewhat and saw the newest JC team member John Watkins come into light of his preferred driving class in stadium truck. Watkins wheeled his Nosram powered T4.1 to Victory in Q1 and Q2, but was unable to shut out Ashley Peeler who took the TQ in count back after taking wins in rounds 3 and 4 respectively. The open tyres for stadium truck saw a huge variation in tyre selection with Watkins and Peeler running Double Dee’s in Q1. As the temps came up most of the JC team were reaching for Blue Bar Codes and then onto Orange in the afternoon. John opted for green Pressure Points in the morning.
Peeler was the standout in the finals taking all 3 by more than 10seconds, 2nd and 3rd podium positions went to count back with John Watkins taking the 2nd place honours over Leigh Cheeseman.

4wd modified showcased the best of what the track had to offer with the high speeds, flowing layout and mega traction. This was Watkins’s debut event for the new Xray XB4, while peeler had already found success at the recent Keilor Stock Shootout with his XB4. Qualifying was ultra close between Watkins, Peeler and Selvaggi (b44.2) each taking out round wins, Peeler getting his 4th TQ of the titles!

A1 saw Peeler and Watkins get away clean and just to a big lead over the field by Lap 6, Peeler led from the start of the race until Mechanical issues forced a retirement on the last lap, handing Watkins the win in A1 over the fast finishing Cheeseman(b44.2). Peeler won A2 by less than 1 sec over Watkins. Peelers run of bad luck continued in A3 with a forced retirement on the last lap while leading, his retirement handed Watkins his first ever State title win! Final Position 1st John Watkins, 2nd Ashley Peeler, 3rd Leigh Cheeseman
10 of the 12 Modified podiums were occupied by the super strong JConcepts Victorian Racing team. Peeler the Standout driver taking 4 TQ’s and 3 State title wins. 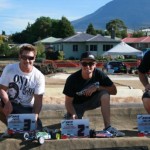 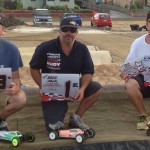 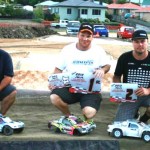 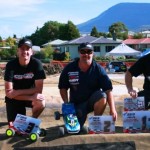 Products used by the JC team