Basher’s R/C Raceway was the site of the 2012 Super Cup Championship Series Spring session race 1 and WOW! What a race it was. With 175 entries, tight race course, and plenty of traction the action was plenty. Close lap times, within seconds of each other, made for an exciting event with positions changing in a blink of an eye.

Expert Buggy Stock – Top qualifier Daimon Borkowicz absolutely dominated with 29 laps / 6:11 taking the pole position. In the A main, spectators had the treat of a back and forth battle between Daimon and Ruben Diaz all the way down to the last lap! Daimon’s B4.1 equipped with JConcepts Bar Codes front and rear (V2) tires in green compound, Finnisher body and Hi-Clearance wing provided a lift and gave him the extra he needed to take the win with 28 laps / 6:11. Ruben Diaz would take the second place spot only one second behind with 28 laps / 6:12. Mike Applegate would come in third with 27 laps / 6:04.

Expert Pro 2 Stock SCT – Once again Daimon Borkowicz with an awesome display of driving took the TQ spot with 27 laps / 6:05. Daimon’s truck succumbed to a mechanical issue on the first lap costing him the race and giving the opportunity to Riker Gatenby to take the first place spot with 26 laps / 6:10. Kevin Abbott took the second place spot with 25 laps / 6:13. Rob Bowser came in third with 24 laps / 6:05.

Pro 2 Mod SCT – BAM! The only word to describe the fierce battles between drivers, rubbing fenders as each driver battled for the top spot. Ryan Eckert was able to take the TQ spot with 29 laps / 6:09. In a battle down to the last lap for the top three drivers, Felix Law rose to the top and took the win with 28 laps / 6:08. Paul Wynn was definitely having a great race as well, taking the second place spot only three seconds behind with 28 laps / 6:11. Ryan Eckert made a charge ranging in positions throughout the race but settled for third only, one second behind Wynn with 28 laps / 6:12.

Pro 4 Mod SCT – The largest attended class had Felix Law taking the TQ spot with 29 laps / 6:02. The A main was another big BAM! event with the almost deafening sound of lexan crashing, bumping, and rubbing, Cory Schoppmeyer took the win with 28 laps / 6:00. Revato Tradardi Jr. came in second, only one second behind with 28 laps/ 6:01. Chris Meloche took the third place spot with 28 laps / 6:03.

Mod Truck – Top Qualifier Mike Applegate, with 29 laps / 6:10, put on an impressive display of driving in the A main, but was succumbed to a marshaling issue and falling a half track and three positions behind his lead. Applegate was then a man on a mission to regain his lead position. The Force was with Applegate, and he was able to reclaim the lead position ultimately taking the win. Applegate took the first place spot with 27 laps / 6:09. Another great battle was between Mike Barone and Nick Schoppmeyer. Only .244 of a second was the deciding factor between second and third place. Mike Barone took the second place spot with 26 laps / 6:03. 677. Nick Schoppmeyer landed third with 26 / 6:03.921.

Mod Buggy – Mr. JConcepts himself, Jason Ruona set TQ at 30 laps / 6:07. It wouldn’t be a walk away win for Ruona in the A main. Jeremy Harris ran hard against Jason all the way down to the last lap. Jason’s B4.1 buggy equipped with JConcepts Bar Codes front and rear (V1) tires in green compound, Finnisher body and Hi-Clearance wing provided the speed and consistency to outlast the field taking the win with 29 laps / 6:05. Jeremy Harris took the second place spot with 29 laps / 6:08. Zack Genova came in third with 29 laps / 6:14.

Mod 4wd – Top qualifier Ryan Eckert with 30 laps / 6:01 takes advantage of the pole position. The win did not come easy, Leon McIntosh put up a great fight all the way down to the last lap. Eckert took the win with 29 laps / 6:00. McIntosh had the second place spot only three seconds behind with 29 laps / 6:03. Mike Barone was in third with 29 laps /6:10.

Special thanks to Basher’s R/C Raceway for a great venue and hosting the 2011 Super Cup awards banquet.

See you February 25th at NEWRED Hobbies in Ocala Florida for race 2 of the Super Cup Championship Series. 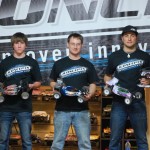 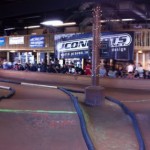 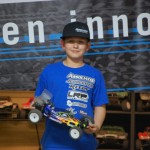 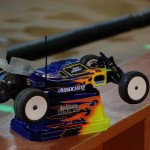 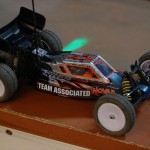 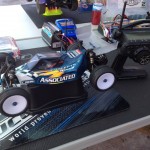