JConcepts Team Drivers once again dominate at Round 2 of the Super Cup in sunny South Florida.

It was a perfect South Florida Valentines weekend at Coral Springs Raceway for round 2 of the JConcepts Super Cup Championship Series. Drivers began to arrive Thursday evening for an early start on Friday morning’s practice day. One by one they took to the track to find that perfect setup on the nicely flowing outdoor clay battleground. Practice closed early on Friday for the track crew to make final preparations for Saturdays show. Early Saturday morning, the final pit spaces filled quickly and 180 entries were ready to start racing at 9:30 AM.

Rich Schafer’s time of 12/5:03.124 sat him atop of Independent 17.5 2wd Stock Buggy after qualifying. Long time Super Cup racer Jeff Lynn led the field of 13 in the B-main after 4 minutes as Alex O’Rourke took the final spot of the A-main. Rich was able to hold on for the win, but Joe Barbera and Kris James put lots of pressure on Rich for the race lead. Joe would finish .6 seconds behind Rich at the line for 2nd place and Kris close behind in 3rd. George Mercardo took the 4th spot and Chris Menar rounded out the top 5.

Mike Applegate in his TLR 22 2.0’s 13/5:13.848 paced the field of 20 Pro Stock 2wd Buggies. Billy Bruce led all of the 10 laps in the B-main for the bump spot and Riker Gatenby raced his way to the A-main in the final bump position. Applegate along with JConcepts team driver Peyton MacDonald pulled away at the start for a 2 car showdown. Peyton put pressure on Mike for all of the 13 lap main looking for a way past. As the two drivers rounded the final turn, Applegate held of a final charge from MacDonald to take the win with Peyton’s B4.2 only .250 seconds behind. Jovan Cruz finished 3rd, TJ Bradley finished 4th and Tim Kowal 5th.

At the start of the Modified Buggy C-main it was Glenn Carlson pulling away for the win with Josh Lekaunas also bumping into the B-main. Walter Cruz and Seth Moore both accepted the challenge of the A-main as they raced to the show out of the B-main. JConcepts team driver Daimon Borkowicz took the TQ with 14 laps 5:19.310 with his brand new Team Associated B5. The new B5 riding on JConcepts rubber swept the top 3 spots by team drivers Daimon, Jason Ruona and Paul Wynn. Jader Lopez was in the 4th spot and Daniel Castaneda 5th place.

One of the largest classes of the day, Modified 4WD Buggy had Jason Ruona and his JConcepts equipped B44.2 on pole with a 14/5:03.836 time after 2 rounds in qualifying . An 11 car group raced for bumps in the C-main as Glenn Carlson and Robert Hercules made their way to the B-main. With a closely contested B-main showdown, Jader Lopez and Felix Law made the final push into the big show. Jason Ruona was on top for the 5 minute A-main run pulling away with the win. Felix Law made the moves from the 10th starting spot up the leader board to finish 2nd. Daimon Borkowicz held off teammate Chris Viesins for 3rd as Chris finished 4th and Jader Lopez rounded out the top 5.

Felix Law found the power to TQ and win in Pro 2 Modified Short Course. Jay Hood left the snow of the north to race in Florida’s sun to a 2nd place finish and local driver, Alex O’Rourke took the 3rd spot.

In Pro 2 Stock Short Course, JConcepts team driver Peyton MacDonald drove his Team Associated SC10 to the TQ spot with a 12/5:04.706. 8 trucks fought for the final two starting spots of the A-main. George Mercardo took the win and Tracey Proctor was the final bump up. JConcepts teammates Peyton MacDonald and Riker Gatenby pulled away from the group as the pair finished as they started. Robert Molina finished in 3rd, Bennie Wilkerson 4th and Tracy Carver taking the 5th spot.

Pro 4 SCT had a great group of racers with 33 in total. With always great and intense action the C-main started off with 14 trucks and was won by Jose Mato and local Yaming Torres began his climb to the top. Another large group of 13 started the B-main, as the time had expired and dust settled Yaming Torres came from the lucky 13th starting spot for the win to the A-main along with Tom Allen taking the final bump. A 13/5:07.043 time by JConcepts team driver Chris Viesins locked him in the 1st starting spot of the A-main and he never looked back for the full 5 minute main taking the win. Janos Lazar ran strong for a 2nd place finish, with Trey Roberts 3rd, Daniel Paz 4th and Mike Barone 5th.

Peyton MacDonald’s TQ time of 13/5:22.305 sat him atop the group of 12 in Stock Trucks. Riker Gatenby made the pass for the race lead on lap 5 after Peyton fell to 5th. As time ran down Peyton drove back into 2nd behind race winner Riker Gatenby’s Team Associated T4.2. Fellow team driver Tracy Carver and his T4.2 was 3rd as JConcepts locked up the top 3 spots. Tracey Proctor was 4th and Kris James 5th.

JConcepts team driver Daimon Borkowicz dominated Modified truck for round 2 taking both TQ and the win. Jeff Kranz found the speed he needed to drive from 5th to finish 2nd. Glenn Carlson held off a charge from Steve Barone for 3rd. Steve finished up 4th and Alex O’Rourke 5th

Thanks to all for the continued support of the JConcepts Super Cup Championship series. A very special thanks to the Coral Springs track crew for an amazing race surface and hard work. Shiverville Raceway in High Springs will host round 3 on March 22nd. See everyone in a few weeks, safe travels and Let’s Race! 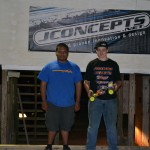 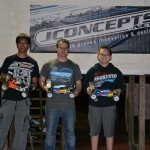 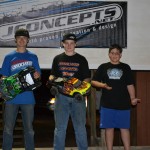 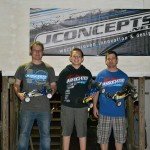 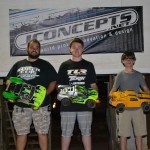 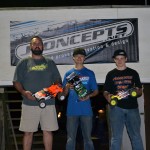 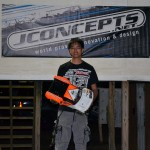 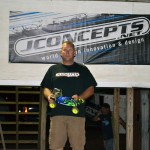 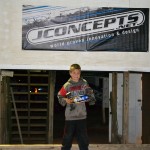 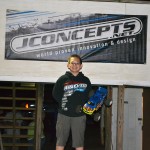