The track has been around since 1986 and has hosted many great events. The race had about 86 entries and as usual the SCORE crew put on a great event with tremendous hospitality.

We arrived Friday evening with plenty of time to get some practice laps in. I decided to run my Tekno SCT410 and Tekno Mugen MBX-6. The SCORE club members did a great job and the track looked fantastic. The surface had some moisture in it and a wide groove had already formed. JConcepts 3Ds in green on the short course and JConcepts Stackers in green were working great.

Race day morning, the track looked damp and loamy. That nice groove was gone. I decided that a larger pin would fare better with the current track conditions so I installed JConcepts Subcultures in green on both vehicles.

The race format for the Summer Scorcher would be 3 rocket rounds of qualifying and 10 minute A-mains which meant a long day in the Georgia sun and possibly into the night. Having been here before I knew the track would change every round especially if we finished under the lights.

First up was the 4×4 short course. A groove was starting to show but the track was still damp and slightly loamy. The Subcultures worked great and I set TQ for the round. By now the Georgia sun was starting to dry the track. I’ve run Tekno Mugen with Subcultures in these conditions before and knew it would still perform well. Fellow JConcepts driver, Travis Dupree, TQ’d the round and I sat third.

Again the SCORE members went to work and as round two started the track started to groove but the loam was replaced with a thin layer of dust. I feel I’ve gotten better at picking the right tire for the conditions and felt 3Ds in green for the short course and Stackers in green for the E-Buggy were the ticket. The JConcepts equipped SCT410 was planted and set a new TQ. The E-buggy felt great as Travis and I both improved our times. Travis again set TQ with me only a couple seconds behind sitting in second.

By round three the groove had turned black and the SCORE crew went to work again blowing the track. By now the temperature had to be in the 90’s and I had a feeling green compounds might have too much grip. I decided to go with 3Ds in blue on the short course and Hybrids in blue on the E-Buggy. The SCT410 felt glued to the track and I made the only 11-lap run in the 4×4 class. Travis and I both beat his round two TQ time, this time only separated by a second at the finish.

The temperature started falling and shadows started covering the track as the mains started. I was running in the later mains and knew it would be dark by time I hit the track. The groove was still black but with falling temps it was back to green 3D’s on the SCT410 and Hybrids in green for the Tekno Mugen. I had a great start with the SCT410 and lead the race start to finish, fellow JConcepts driver, Jonathan Paulk finishing second. Travis and I had been close all day and I knew the E-Buggy main wasn’t going to be any different. When the main started I wanted to hang behind Travis and wait for him to make a mistake but beside us both having first lap bobbles, he never made a mistake and we finished 1 & 2.

There were several other JConcepts Drivers dominating their classes as well. Tim Smith TQ’d and won the 1/10th Stadium Truck running JConcepts Carvers up front and Bar Codes in the rear in Blue Compound. Tim also TQ’d in 1/10th 2wd Buggy. Travis Dupree TQ’d and won the 1/8 Pro Nitro Buggy class with Kevin Bullock in 2nd both running Stackers in Blue compound.

I have to thank Phil Hurd Raceway and the Score club members for all of the work and putting on another outstanding event. I’m look forward to returning soon. I also have to thank JConcepts for the highly competitive products, fast shipping, and awesome support. 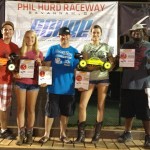 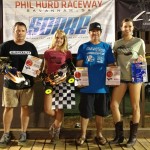 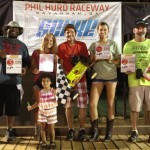 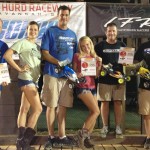 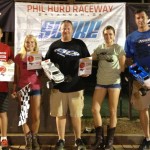 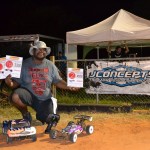 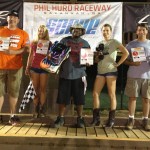