I arrived at the Sacramento airport slightly ahead of schedule to a brand new airport. The place is so new I thought I was at the wrong airport. Totally nice upgrade for sure.

Tanner was already at baggage claim where he was waiting for 4 hours…ouch. We took the bus over and picked up the rental car which for some reason is super expensive and headed toward Chico. About a 1.5 hour drive and we arrived to the freshly built and prepared Outback Raceway. Ruben and crew have built the nicest track to date and with the wet surface the track looks absolutely amazing. Nice job!

We realized pretty quickly that our box of tires had not arrived yet so we quickly ordered some via the Amain Hobbies pickup window. Dialed service I must say and we were mounting some JConcepts Bar Codes in no time at all. We missed the first round of qualifing at the club race but both of us were mounted and ready for round 2. Tanner came up with an idea to have a bet for dinner and whoever qualified lowest had to buy dinner. My plan was to win on consistency, surely Tanner would pop a ball-cup and I’d finish and take home the free dinner.

Tanner was up first and after 5 laps was leading his qualifier. Eric Albano, fellow JConcepts / AE driver had TQ and was in the same qual as Tanner. The 2 drivers battled and Eric came out on top retaining his TQ from round 1. Tanner had a great run also putting a ton of pressure on me. No breakage meant I had to earn it… Damn.

Neither one of us had turned a lap before the qualifier and I’ll say I wasn’t that confident looking at the traction and difficulty of the track layout. I hadn’t driven a car since May and felt nervous…ha

I got out there and felt pretty decent. Doubles, triples and off-cambers.. I got this. I went for both triple jumps on my first lap and…success. I blew a few corners and fell off the off-camber sections. Ok, let’s race!

I was top 4 after a few laps but that wasn’t going to cut it. I needed to battle for the lead to have any hope for free dinner. I got a few decent laps and turned a couple 19 section laps and was up to 2nd place… Tanner might be in trouble! Then I flipped off the front step-on and step off section. Blew-out on a few more laps..ugh I was off the pace now. I finished 2nd and turned 18 laps but Tanner beat me by 13 seconds… Dinner was on me! In & Out it was, in between the qualifier and main and it cost me an extra $7 to boot.

Vehicles were prepped and ready for the main. I made it into the battle for the lead during the first several laps and felt confident in the lead group. Eric Albano led for many laps but Tanner eventually took to lead and held it to the finish. Tanner 1st, Eric Albano 2nd, Brian Eddy 3rd and me in 4th. Respectable finish for all on the first night. Looking forward to improving tomorrow. 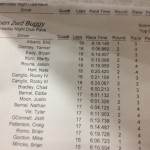 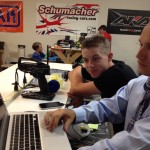 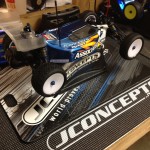 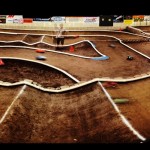 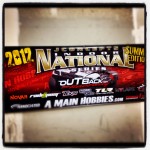 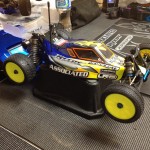 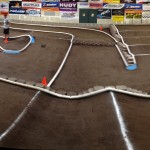 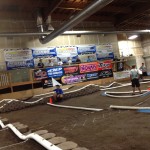 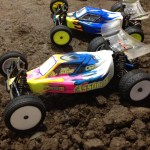