It’s been a busy last couple of days since my arrival to Southern California. I went straight to the track Wednesday where they had a club race which allowed me to get a feel for the track, layout and competition. Track layout is a blast and one of those you seem to get hooked on and trying to go faster. That familiar voice coming from the computer letting you know where you stand is normally enough to get everyone’s competitive juices flowing.

The club race belonged to Hartson but Frank Root wasn’t far behind as the classic AE vs. Losi battle was pretty hot and heavy once again. It’s going to be tight this weekend.

I was able to scam some laps at the end of the night out of Sean Cochran who had his 1/8th electric buggy, 4×4 short course out and was nice enough to let me have a go at it. It was awesome to get out on the track and I could already feel the pressure of trying to go fast. I ran about 3 minutes and I was already asking what was hot-lap in the 4×4 SCT main. Ugh, that’s how we roll.

Frank Root let me run his 22 buggy and I was impressed. Losi did their homework with this buggy and it shows. Seems to be popular at the track as well and things are looking very positive at the moment in the TLR camp. I just can’t help but think, how’s the Punisher going to look on the 22? Hmmmm…

I finally packed it up at what have been 3am my time in Florida and checked-in to the hotel. It’s like Tyson checked in to my room at the same-time and gave me one of those Phil Collins, In The Air Tonight punches from the Hang Over. BTW, when is part 2 coming out?

The next day started early again for me because of the time change I was up at 5:30am. Thanks Bro!

I headed for breakfast then straight to the track. Denny O was there to open things up and my pits were assembled! Heck, ya!

Off to the airport to pick-up Dave Duncan and then it was time to make a swing by AE and get some random items before heading back to the track to get some practice in with my own vehicles. We gave Dave the 50cent tour of AE and bumped into a bunch of friends. Awesome time!

I finally hit the track with my 2wd SCT and I was pretty pumped on how it was straight off the trailer. 2wd was pretty good also but like always it’s the hardest and the heavy players make the lap-time battle pretty rough in that one. Greg Hodapp gave me a compliment on my 18.7 lap-time on practice run 2 so I guess I was heading in the right direction.

Yes, Greg Hodapp was out along with Steven Hartson, Mike Truhe, Frank Root, Brian Kinwald, Josh Numan and Chris Jarosz. While checking how to spell Jarosz name I noticed Masami had sent me a PM on Facebook. Sweet! It’s like getting a call from Michael Jordan for an R/C guy.

Guys were hauling the mail today with Hartson leading the lap-time war with hot lap at 17.7 with the 2wd buggy. Also, Steven has the 1/8th e-buggy on the track and it looks on point. Stevens 1/8th buggy was fitted with our new Punisher wing and Inverse wheel for testing. Things are looking dialed!

My big debut in the 4×4 SCT class came today when I hit the track with my SC10 4×4. Man, this is a blast! Get ready for some back orders AE. This truck is really sweet and the designers really have tried to think of everything on this truck. Durability? Man, I destroyed this truck on several occasions and each time I drove away with no issues. This truck is like those 1990’s videos…. “And they walked away”. Sean Cochran was really helping me a lot today and it’s much appreciated while I try and get up to speed. Get this, I look-up while Sean makes a change to the truck and instead of taking a chance of setting it down on the straight he throws it from the back straight-away wall 15 feet to a lane over to safety. All I hear is body tumbling and I just grab throttle and wiggle the wheels and this thing lands on the wheels like a cat and I’m punched onto my race line. Not exactly how I’d throw out my 2wd. Ha, it’s Short Course Bro!

Kinwald hits the track with his newly painted Punisher body with yellow accents. I like it! You can’t really judge anything off a Kinwald practice he just cruises and tests. How can’t he not want to go nuts listening to lap-times? Oh, that’s right he’s a 30 time national champion. Ha

So, Dave and I hit lunch and I’m telling him how we should leave early and get some sleep. Yeah right! We ended up packing it in at 12:30am which meant Dave had been up 24 hours! It’s a California thing Dave. Get use to it! 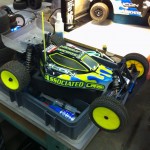 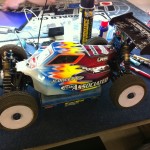 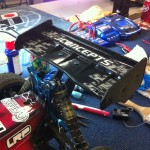 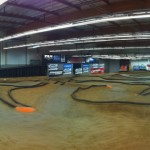