Heading to the Silver State Nitro Challenge just outside of Las Vegas, NV. Once again, I have been on a roll for flights on Southwest. With their cattle call boarding process, I have had a keen eye for finding, well…a good seat. A pleasant flight, and a double upgrade on the rent a ride, this weekend is off to a good start.

Upon entering the track, the first thing I noticed was the unique way the drivers stand was situated. With a bunker being built on the end of the property, having the need for a small drivers stand of only five feet tall, allowing a good view of the track, and being close to your pit man.

Just outside of Las Vegas in Boulder City, is the location for this years Challenge. Every year, there are stories about the challenges of racing in the desert. Track that blows out. Intense sun. Wind. Blowing sand. So far, things are going good this year. The track which is being watered every other heat is holding up well. In the afternoon, the wind picked up, but according to the locals, that is the norm. Today, it just got kind of windy for an hour or so. Hopefully I won’t experience the sand storm, tent crippling, strong wind. But it’s still very early in the weekend.

The pits consist of rented containers, as they dominate the bigger sections of the pit area. Spaced out with enough distance in between for the standard E-Z Up to fit. With probably close to 30 of them, most of the teams have one or more, or access to one. Today consisted of two rounds of controlled practice, with the second session being timed for the fastest three consecutive laps seeding you into the qualifier. The surface, while holding up well, is a bit strange, compared to other races. A kind of soft, sandy, loose fluff is what the drivers are racing on so far. Once again, our drivers are going with the Hybrids on both Buggy and Truggy. Check back for more from the Silver State. 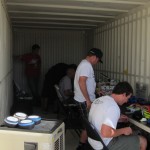 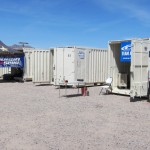 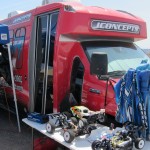 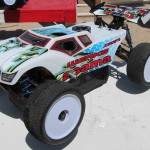 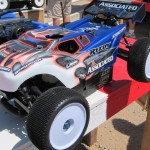 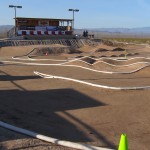