Ryan Maifield has won the big one at this year’s 16th running of the Dirt Nitro Challenge.

The TLR driver would claim his 2nd buggy title at the Fear Farm but more significantly his first big nitro win for his new manufacturer when on the penultimate lap of the exciting 45-minute A-Main he got ahead of former team-mate Ryan Cavalieri. A race that saw four different leaders, Maifield went to the front ahead of defending champion Ty Tessmann 4-minutes in until a mistake at the 10-minute mark would drop him to third after which his challenge looked to be over as he fell further down the order to sixth. A driver famed for his late charges, the Arizona ace never gave up and as a gusting wind added to the challenges of the tough track conditions in the closing stages, Maifield was there to capitalise to take his second major title of the new season having last month claimed his first ever Reedy Race of Champions win. Unfortunately for the stars of last night’s epic Truggy final, Tessmann and new champion David Ronnefalk, their races would hit trouble. Holding a comfortable lead with just 8-minutes to go Tessmann would suffer a problem with his battery connector and losing over a minute in the pits fixing it, the World Champion would be leaving with no titles this year finishing up 7th overall. Trying to recover, from a frantic start, Ronnefalk would twice run out of fuel after communication issues with his pit crew. With Maifield and Cavalieri separated by just 0.684 joining them on the podium would be the other of America’s offroad establishment trio Jared Tebo. Leading a total of close on 1/3 of the race, Dakotah Phend would just miss out the podium by half a second, the wind being the downfall to the 18-year-old’s quest for a first DNC title. A home race for the Arizona ace with his victory proving a popular one, Maifield said ‘to win buggy class was all the more sweeter after the bad luck of the World Championship’. Describing the Main as ‘a really fun race’ he said he enjoyed his battles with both Tessmann and Tebo. Making contact with Tessmann as they fought over the lead, he said ‘I got into Ty but it was just racing and I let him go’ back into position adding it was a ‘bummer’ the Canadian had a problem with his car. Describing TLR/Orion team-mate Phend as ‘super fast’, he said when he dropped down the order he ‘kept the head down’ knowing anything can happen in ‘these crazy ass races’. Admitting that while luck ‘sure didn’t help at the beginning, it fell (his) way at the end’. Asked about the significance of his first big TLR nitro win, he said ‘I stepped into a great progamme and that’s why I wanted to work with them’. Running JConcept’s blue compound Diamond Bar tyres on his 8ight, he said going into the race the mileage from his Orion engine was ‘questionable’ but leaning it out ‘quite a bit’ he ‘throttle drove it’ allowing him to run 9-minutes between stops.

Photos and Report Courtesy Of RedRC.net 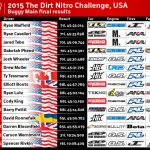