JConcepts driver Ryan Maifield has finally completed his quest to become an IFMAR World Champion. The team flew all the way to Xiamen, China, to compete in the bi-annual event of champions at ARC Raceway. Ryan’s hopes were in slight jeopardy in the early stages of qualifying with some sub-standard qualifying results. However, the magic all happened during round 3 of qualifying where the ace driver from Arizona rose to the challenge and earned a round TQ to completely alter the event expectations.

During round 4 of qualifying, Ryan finished 3rd for the round giving him at least a slight chance, along with 3 other drivers, at the overall TQ going into a 5th and deciding round. Once again, Ryan was brilliant in the 5th round of qualifying and took a dramatic TQ over Yokomo teammate Lee Martin. The Yokomo duo started 1st and 2nd in the A-final with 4-time World Champion and Team Associated | JConcepts driver Ryan Cavalieri in 3rd. A-1 Final went off and Maifield took a large lead over Lee Martin. Ryan powered down on the Yokomo YZ-2 DTM with JConcepts F2 body and Aero wing package and maintained a nice lead. Martin made a run toward the later stages of the race and a mistake by Ryan closed the gap considerably. A friendly marshal helped Ryan to his wheels while maintaining the lead which he held to the finish. Lee Martin finished 2nd and Ryan Cavalieri 3rd to close A-1 in dramatic fashion.

A-2 Final began in a similar fashion as the TQ breaking out from the field. An uncharacteristic mistake by Lee Martin allowed Cavalieri to squeak by to challenge Maifield. The two JConcepts drivers maintained a steady pace and pulled away from 3rd. Maifield stuck to his jump section routine in the 8-pack where he comfortably rolled one of the doubles while Cavalieri let it hang-out jumping the difficult section. The drivers went nose to tail for several laps until a bobble in the S-turn section by Cavalieri allowed Maifield to stretch a gap. Maifield crossed the line earning his first ever IFMAR World title wrapping it up in 2 consecutive mains, Ryan Cavalieri finished 2nd in the main to keep his podium hopes alive while Jared Tebo finished 3rd. With the Championship already decided for Maifield, it would be Lee Martin and Ryan Cavalieri on the front to start the A-3 Final. Martin made a mistake on the first lap allowing Cavalieri by and into the lead. With some driving moves, David Ronnefalk emerged into the running and ran alongside the 4x champion as the JConcepts drivers powered around the ARC Raceway course. A mistake by Cavalieri allowed Ronnefalk in to the lead showing what the HB Racing driver could do in the 2wd class. Jared Tebo made his way up through the pack and gained 3rd but several seconds behind the lead group of Ronnefalk and Cavalieri.

Cavalieri pushed hard but couldn’t catch Ronnefalk, the 1/8th off-road World Champion, who held on for the lead and crossed the finish line the winner of A3. Cavalieri finished 2nd and Jared Tebo 3rd in the final main to secure each driver in the group at least a top 5 finish. After scores were tabulated, it was Ryan Maifield champion, Ryan Cavalieri 2nd, Lee Martin 3rd, Jared Tebo 4th and David Ronnefalk 5th. With three JConcepts drivers in the top 5, it was an event to remember for the racing team from Groveland, Florida. 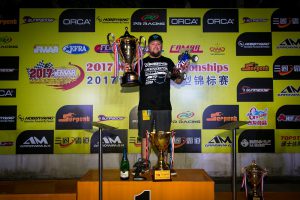 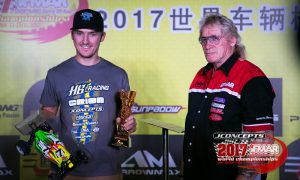 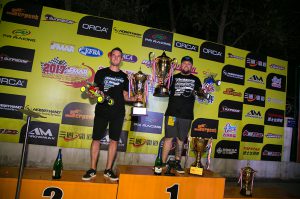