This year, the Region 8 Championship race was held at Fastlane Raceway in Blue Springs, MO, near Kansas City. This years event ended up being around 150 entries and included several of the Midwest’s finest drivers. The track surface consisted of hard packed top soil and had medium grip. The layout was pretty cool and included an option step up in the center where you could go double-double or single-triple. The race format this year was a little different from years past and included four six minute qualifiers with single eight minute main events.

Qualifying was random order. There were four rounds and a total of 20 heats. The track was pretty tacky for the first two rounds, then it started developing a little bit of dust outside of the groove. As the day went on, the track became looser and dried out a little more but still had decent grip. Green Bar Codes front and rear provided a good amount of traction and consistency with low tire wear. There were a few green Pressure Points out on the track as well.

After four rounds of qualifying, 2wd qualifying was very close. Taylor Larsen, Cody Hollis, Nick Gibson and Mitchel Gardner all TQ’ed a round, which left it up to the finishing orders of their other rounds to determine the overall TQ.

When the mains rolled around, the track was looking dry so before the A’s, they watered it a little. It made the track have some more grip, but slimy in some places. The eight minute mains proved to be pretty exciting with all the battles that went on in the middle of the pack. The track was all about who could stay consistently fast.

JConcepts drivers filling the podium and most of the A finals. Thanks to the Fastlane crew for an amazing weeknd, and the racers of Region 8.

Coming up in a few weeks at Fastlane is the JConcepts Invitational race. There will be an Invite class as well as an open for all classes. 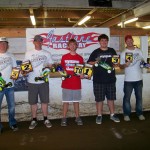 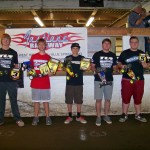