Saturday EN Hobbies was scheduled to run a Presidents Day Trophy race. I showed up to the warm up race on Thursday and was asked to run the race program. I was honored to be asked to run such a prestigious event and due to some awesome wrenching by my brother Luke I was able to race as well.

The warm up race went well for me Thursday night and I was able to get my cars dialed in. This was time well spent and my cars were best on Green Bar Codes front and rear. Upon arrival Saturday morning it was clear that “big race” was in the air. Running the race I was only able to practice once with the 2wd Mod car and got no practice with the 4wd Mod car.

After the playing of the national anthem the first qualifier went off at 1:30PM with 16 heats. We ran straight through qualifying for 3 rounds and each round took about two hours

I TQ’d every round of 4wd. Using rocket round to set the mains the time from round 2 was used to put me on the pole.

In 2wd I was 4th going into the mains behind a pair of Losi drivers, JP Richards and Curtis May. However it was my personal mechanic Luke Richards who was on the pole.

After the mains were setup we had drawings for 2 of the 4 gift certificates donated by JConcepts. We then proceeded to give a gift certificate to the winners of the Novice A Main and the Novice B Main. A huge thanks to the guys at JConcepts getting onboard on such short notice.

In the A Main of 2wd I started 4th on the grid. JP Richards checked out and left Curtis May, Luke Richards, and myself to freight train around. With 2 laps to go I was able to make a pass to get 2nd and that is how I would finish. Luke Richards would be able to finish 3rd for a Richards sweep of the podium.

In 4wd taking advantage of the TQ spot I lead tone to tone taking the win. My JConcepts equipped 4wd was awesome all day long. 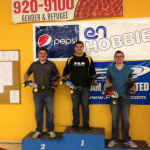 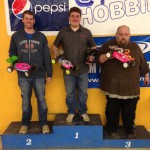 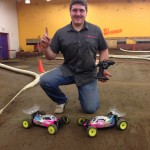 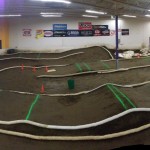 I would like to thank the following people for their support,

A huge thanks goes out to JConcepts for their sponsorship of this event.