Schoettler Takes NIS Round 2 with JConcepts.

The Northwest Indoor Series headed into round 2 January 24-25 in Albany Oregon’s Northwest Hobbies and Raceway. Open practice starting Saturday morning with 2 rounds of qualifying later in the day, followed by 1 more round Sunday morning to seed the mains based on Qual Points.

JConcepts had several drivers from Oregon and Washington in attendance to tame the technical flowing layout. In 2Wheel Mod, JConcepts Driver Michael Schoettler, the winner of round 1, threw down the TQ in round 1 to start things off. Round 2 would see Kyosho/JC Tanner Day take the round. Schoettler took round 3 to take the overall TQ and start from P1 in the main.

In A1 the JConcepts duo of Schoettler and Day would sneak away from the field and finish in that order. A2 would again be Michael Schoettler out front with a mechanical from Day dropping him out giving the easy victory and overall to Schoettler. A3 would be a wire to wire win for Tanner Day giving him 2nd overall followed by Mikey Brown taking the last podium spot with a pair of 2nds.

4Wheel was won by Michael Schoettler giving him a perfect score for the day with another TQ and win. This time followed by fellow AE/JConcepts team mate Harley Yoshii in second.

The Series is doing well in the Pacific Northwest as racers will be gearing up for round 3 hosted by Four Seasons RC February 28-March 1, 2015. 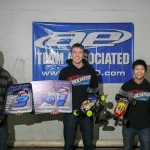 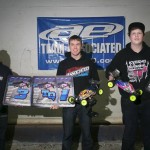