The North Carolina Championship Series has completed 4 of 5 rounds and this weekend was another sweep for JConcepts! Overcash R/C located in China Grove, NC hosted the event. Heavy rains hit the Carolinas prior to the event, but the track crew had the track SUPER smooth and rolled by Saturday morning. The track started as moist and packed, and by the end of the day turned into almost a blue groove with just a couple broken places, but overall a great track everyone enjoyed. The final round will be at Nitro Valley Raceway on June 27th, and driver’s Chris Pace and Greg Smith are leading the points heading into the final round in buggy and truggy.

In the buggy class, Brandon Melton and Chris Pace represented JC products, and looked to be in fast form. Early out of the gates, it was youngster Robbie Saxon piloting his Losi to a first round TQ by one second over Chris Pace. In the second round, Chris Pace changed from blue Sevens to blue “crow-bows” to take the second round TQ. In the third and final round, Brandon Melton jumped on the “crow-bow” train and set fast round for the day and TQ, but didn’t have an additional TQ round for the overall. Chris Pace would TQ, with Robbie 2nd and Brandon 3rd.

The main started clean with a mandatory “single-single-single” section to prevent the first corner madness. Pace was able to take advantage of the TQ spot and get off to a great start. Melton got by Saxon about 2 minutes into the race and began to inch closer to Pace as both drivers tried to set into a rythem. Unfortunaly just before the first pit stop, Melton had a slight mechanical failure which put him laps down from there.  Barry Pettit showed up late and bumped all the way to the A-Main and once held the second spot, but a few gremlins cost Barry a late race charge and he settled for 4th. The great story of the finish was the youngsters Robbie Saxon (17) and Justin “full punch” Atkins (11) each running awesome races to take 2nd and 3rd. There finish was not by fluke, as each driver were able to crank out some impressive laps to earn a podium spot. In the end it was Chris Pace leading from tone to tone to take the win with the RC8B debut.

The truggy class has seen a resurgence of late with the additions of the new Losi truck and Mugen truck to the market. However with the added crowd, Greg Smith showed he’s still the man to beat with his JC equipped ride. Greg ran Blue Crosshairs from beginning to end to sweep TQ and the win. Unlike buggy that saw 3 TQ’s in 3 different rounds, Greg had truggy locked down with a TQ each round and won the main convincingly. Unfortunatly there’s not much exciting race action to announce, as Greg would win by a lap over Jim Atkins in 2nd and Don Goodman in 3rd. 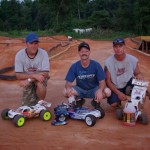 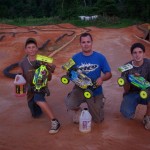