Neo12 – Updates From The Track Hello, from the 2012 Neo Buggy. Yep, we are on a farm. With the 100 yard walk to the track building, and the ever present smell…of, well…cow stuff

We are definitely on a farm. Although, I have yet to see any animals, well, except for he most spoiled German Shepard ever.

Today is the practice rounds. There are three rounds of controlled practice. The first, just a five minute run, followed by two seven minute runs. The seeding of the heats will be set using your top three consecutive laps from any one of the runs.

With the limited track time, each run is important. With the controlled practice, the heats are set up much like a race, with car numbers. Your number determines where you stand on the Drivers stand, whether you like it, or not. After the resort to the real race heat, you may be standing on the completely other side of the stand from where you are accustomed to standing. Only in the final, are you allowed to pick your spot, from the order you are qualified. This is normal procedure in European races, along with the practice schedules. Much different from the American scene.

For the JC Team, the Hybrids and the still in development Black Jackets are the tire of choice. All of the drivers are having success in their runs, and getting an idea of what will be needed, come qualifying time.

Tomorrow will start with three rounds of qualifying, followed by two rounds on Sunday. Your best three out of the five will place you into the final order.

Check back for more from England. Oh, wait. I found a cow.

Inside the pit area, there are two large (12×12) screens, one with the Live RC score screen, the other with the Live RC video feed. It is pretty sweet being able to just look up and see what race is on track, check on friends, or watch rivals from anywhere in the pit room.

Onto the racing. The first round in the morning was the first real chance to see how the drivers were going to handle the challenging track, on the clock. After yesterday’s seeding, much of the heats were consistently getting faster as the numbers got higher. For our guys, they left some on the table, slight mistakes, or bad luck with traffic didn’t show the true score of where they could be. Round two provided more of a true result of the pace of the day. JR Mitch had a great run in his seeded heat, taking the win in race #14 over Atushi Hara, and Tony Truman finishing third. A few races later, Ryan Maifield was on a flyer leading late into the race by just over a full second. As the laps wound down, a slight mistake by Ryan, caused by the blind spot from a turn marshal, sent Ryan on a tumble towards the back wall after clipping a pipe. The need to be marshaled left the door open, as Ryan fell to third for the round.

In the third, and final round for the day, with the track drying out more, some drivers were going to experiment with tires from round two, where every driver was on the new Black Jackets. JR had a rough go towards the end of his run, and gave a way a few spots. Jörn was feeling good, only to have his switch turn off on the sixth lap, and Ryan ran a good clean race, with only a few laps with traffic, to finish a strong third, setting himself with a sure bid into the semi finals.

Tomorrow brings a new day, and we will all be back on the Black Jackets for the morning session, and then go on from there, looking forward to the finals. 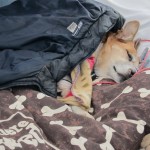 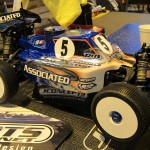 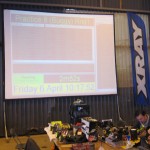 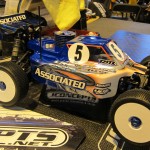 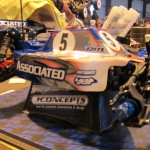 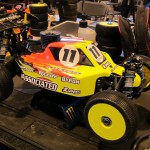 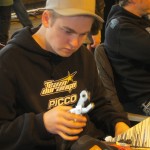 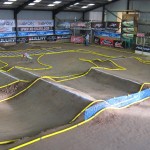